(UroToday.com) The 2022 Annual Meeting of the American Urological Association was host to a panel discussion regarding the history, current state and future plans for the Women in Urologic Oncology (WUO). This session was moderated by Dr. Eila Skinner with presentations from Drs. Cheryl Lee, Sarah Psutka, Sima Porten, and Kristen Scarpato. 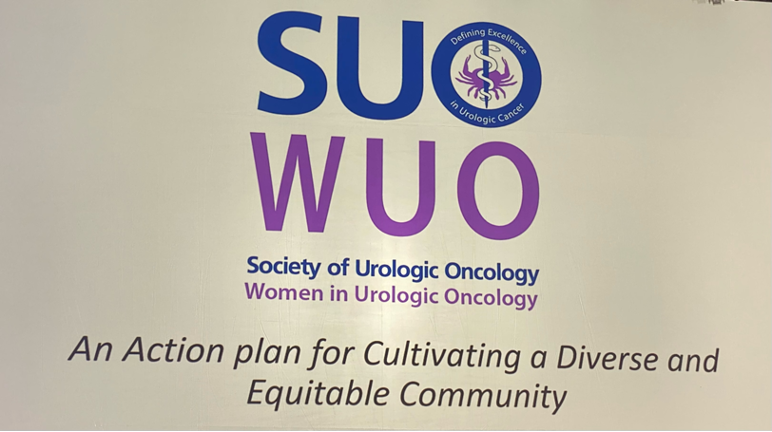 Dr. Skinner began the discussion by pointing out that as recently as 1990, there were only a handful of women urologists who specialized in oncology. Currently, however, there are 100 SUO female members. Dr. Skinner went on to present the panel members and the topics they were to elaborate on:

Dr. Lee began her talk with a historic overview of the SUO. It was founded in May 1984, with the goals of establishing identity, representation, advocacy, community, education, and research. Dr. Lee emphasized that the WUO had the same objectives of establishing similar principles within the AUA, SUO, National Cancer Institute, and industry with regards to support of clinical trials and research. 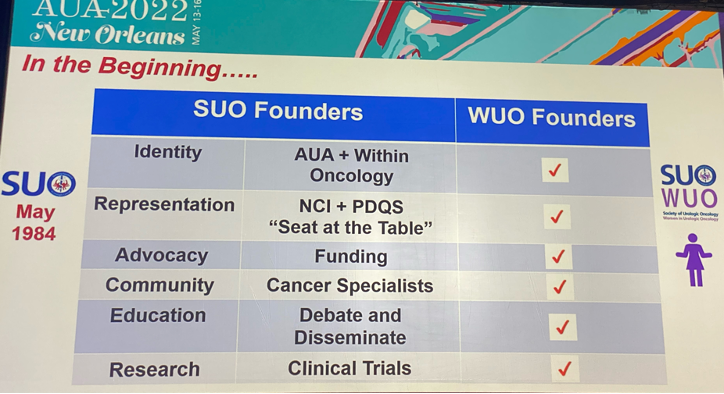 The current state of the WUO was facilitated by many early trailblazers, most notable of whom was Elisabeth Pickett who was the first female urologic oncologist in 1954. Dr. Lee next posed the question: what percentage of SUO members should be female? Ideally, it would reflect the percentage of women in our society, but if not, then it should at least mirror our patient population. Of the 444,660 genitourinary cancer patients, 11% are women. As of 2022, there are 1,048 SUO members across all categories, thus, there needs to be a minimum of 115 women members to match that percentage.

Next, Dr. Psutka began her segment by expanding on the current statistics behind the WUO (2017-2020). Although women currently account for ~50% of medical students, only 3% apply for fellowship in urology, none are AUA/Professional society executive board members, none are Editors-in-Chief of a major urologic journal, and only 3% are chairs in urology/surgery. 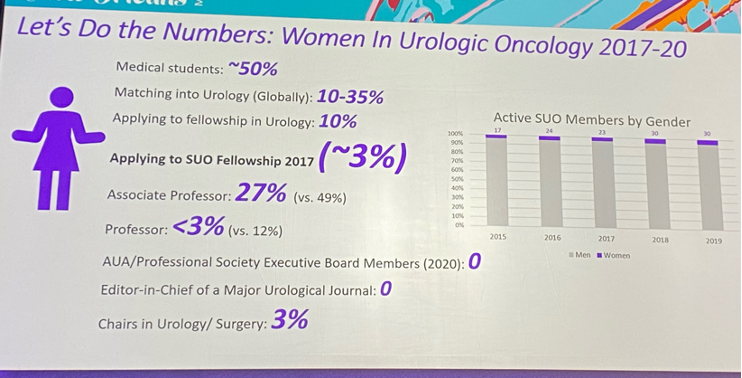 In May 2019, “activation energy was reached”. A formal application to the SUO board for recognition was submitted by the founding members of the WUO. In their application, signed by Drs. Sarah Psutka, Jennifer Taylor, Armine Smith, Sima Porten, Angie Smith, Katie Murray, Cheryl Lee and Eila Skinner, they requested:

Their subsequent requests were as follows:

Dr. Psutka underlined the importance of affinity groups which have been used by greater than 90% of Fortune 500 companies to increase diversity and equity. The core principles of the WUO are to:

Dr. Psutka went on to highlight the downstream effects of establishing the WUO. There has been an increase in:

Next, Dr. Scarpato began her portion of the panel discussion by highlighting the relative lack of women in urologic oncology, particularly when compared to the pediatric urology and female urology subspecialties. Between 2004 and 2015, there were 34 women urologic oncologists, as compared to 83 and 197 in pediatric urology and female urology, respectively. Dr. Scarpato went on to highlight that women urologists with an oncology focus accounted for only 4% and had a median annual income that was ~$54,000 lower compared to their male counterparts.

There is some good news however with the increase in women urologic oncology fellowship applicants which had remained less than ten annually, until 2019 when there were ten female applicants, followed by 12 in 2020, and 17 in 2021. Dr. Scarpato next highlighted work by Wong et al. which surveyed 353 urology applicants from the 2020 AUA Residency Match. This study demonstrated that a significantly higher percentage of female and underrepresented minority (URM) students experienced discrimination. Significantly, a higher proportion of female residents, faculty and leadership at a particular program had a more favorable impact on the rank lists of female applicants compared with males.2

Dr. Scarpato highlighted the most important action items of the WUO:

Dr. Porten next went on to discuss building a career as a woman in urologic oncology. She emphasized the importance of finding your passion and using it to create and follow your life compass. Of utmost importance, though, is to build a network of women and men that can guide and support you. Dr. Porten highlighted the importance of being an ally:

Dr. Porten next emphasized the importance of being/finding a mentor and a sponsor, which are two separate roles. Sponsorship is a professional relationship that focuses on career advancement and rests on power. Sponsorship is episodic, transactional relationship that is critical for high-level advancement. Mentors can be sponsors when they have influential roles with access to resources and networks. Dr. Porten noted that women are less likely to actively seek out or be identified for sponsorship and thus need to be proactive both as a sponsor and someone who wants to be sponsored.

On the other hand, a mentor shares with a mentee information about his or her own career path and provides guidance, motivation, emotional support and/or role modeling. A mentor may help with exploring career paths, setting goals, developing contacts, and identifying resources.

The panel concluded this discussion by highlighting their gratitude for the early trailblazers who made this path possible and their strong desire and will to maintain the growth of this society.