Background: Crohn disease is a chronic inflammatory disease of the bowel that may affect the urinary system.

Objective: The authors review their experience, evaluating the incidence, and examining the various modalities employed in the diagnosis and treatment of patients with Crohn disease complicated by fistulae.

Methods: Of 541 patients with confirmed Crohn disease treated and followed in the Department of Gastroenterology in La Rabta University-Hospital in Tunisia between 1995 and 2010, 7 patients (1.3%) were found to have enterovesical fistulae.

Results: A fistula was diagnosed preoperatively in 6 patients. Six patients underwent resection of the diseased intestinal segment with bladder repair, and a temporary stoma in 1 case.

Conclusion: Enterovesical fistulae complicating Crohn disease is often clinically suspected preoperatively. Treatment, based on resection of the diseased bowel and extirpation of the fistula, can be accomplished with minimal morbidity and mortality.

Crohn disease (CD) is a chronic inflammatory disease of the digestive tract that may reach any segment of it. Although internal fistulae complicate 20 to 40% of CD [1,2,3], enterovesical fistulae are rare (less than 5%). They are mostly symptomatic and occur after several years of CD evolution. They are usually poorly tolerated and require surgical treatment [1].

We discuss through our series and literature review the natural history, clinical features, diagnostic tools, and the treatment of enterovesical fistulae secondary to CD.

We reviewed all patients with a confirmed CD followed in the Department of Gastroenterology in La Rabta Hospital-University from 1995 to 2010. Medical records were abstracted for patient demographics, presenting symptoms, diagnostic tests, and management. We also determined CD behavior and location according to Montreal CD classification [4]. 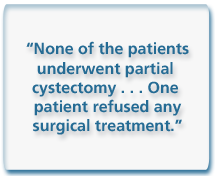 During the study period, 541 cases of CD were reviewed. Seven of them had an enterovesical fistula with an incidence of 1.3%, which were 5 males and 2 females with a median age at diagnosis of 30.5 years (19 to 49 years). The median period between CD diagnosis and fistulae appearance was 36 months (0 to 180). Fistulae were inaugural of CD in 3 cases. None of the patients had previously received immunosuppressive therapy or had a history of previous surgical treatment for CD. The location of CD was ileocolonic in 5 cases and ileal in 2 cases (including 1 extensive ileal disease and 1 localized ileal disease). Extensive ileal involvement was noted in 4 patients. Clinical disease activity was severe in 2 cases. Concomitant ileal stenosis was present in 4 patients.

Preoperatively, the diagnosis of fistulae was confirmed by barium enema examination in 3 patients, computed tomography (CT) scan in 3 patients, and MRI in 1 patient. The most helpful preoperative diagnostic examination was contrast-enhanced CT, which confirmed free air in the bladder and direct communications between the bowel and the bladder (Figure 1). The opening fistula was on the bladder dome in all cases (Figure 2). Four patients had associated internal fistulae: entero-enteral fistula (N = 3) and entero-colic fistula (N = 3).

Five patients were treated by resection of the area of macroscopically diseased bowel with primary anastomosis and pinching off the dome of the bladder. The bladder defect was repaired in 2 layers using an absorbable suture material and an indwelling Foley catheter that was left in situ for an average of 2 weeks after operation. None of the patients underwent partial cystectomy. In one patient with a complex fistula from the ileum and the colon to the bladder, a colectomy and ileorectal anastomosis was performed, which was protected by a temporary loop ileostomy. One patient refused any surgical treatment.

There were no bladder leaks and no anastomotic leaks. There were no perioperative deaths. After surgery, patients were then treated with azathioprine. With a mean follow-up of 52 months (2 to 184), there has been no fistula recurrence in all operated cases.

The pathogenesis of fistulae associated with ileo-colic or sigmoid colon (anatomic proximity to the bladder) included inflammatory processes secondarily extended to the bladder, with or without suppuration and abscess formation that accompanied the establishment of these fistulae [6,10]. They usually affect the bladder dome [1], as in our series. CD can also cause an inflammatory pseudo tumor of the bladder [11,12].

The occurrence of enterovesical fistulae is usually seen in severe and evolving CD (4 in our series), and it is frequently associated with the accentuation of gastrointestinal and infectious symptoms [1,13]. Three of our patients had a deep abscess at diagnosis. Enterovesical fistulae can complicate a known CD or reveal it [12,13] as with 2 of our patients who were not known to have CD. Fistulae may occur after bowel resection for CD as a complication of an anastomotic leakage and abscess [14]. Usually these fistulae will resolve with conservative management. Very rarely, enterovesical fistulae may be associated with malignancy that complicates CD [15], especially when fistulae involve the base of the bladder.

The fistula may be identified by cystography or intravenous urography [13,16]. The visualization of the fistula at cystography is not always easy to obtain [5]. This emphasizes the importance of locating the fistula in the small bowel and colon by barium or Gastrografin enema examination [3]. Barium or Gastrografin enema and colonic endoscopy allow direct visualization of the fistula. Demonstration of barium in the bladder will also present fistulae, and it will also define the extent of intestinal disease and detect other internal fistulae [1,10,13,14,16].

CT is a sensitive and noninvasive method of evaluating the bladder and can be used to identify patients in the prodromal stage who are at risk of developing enterovesical fistulae [21]. When occurring, CT scan may show 2 aspects: focal bladder-wall thickening adjacent to an extravesical soft tissue mass and/or focal bowel-wall thickening and fistulae formation with intravesical air and associated focal bowel-wall thickening and/or extravesical soft tissue masses [21]. CT scan may also show an intravesical fluid level or an associated abscess [1,13,16]. Magnetic resonance imaging (MRI) is more sensitive than CT in detecting enterovesical fistulae [22].

Cystoscopy is the best method of investigation since it makes the diagnosis in 82.5 to 100% of cases [1,13,16,23]. It shows the ureters and the fistulous orifices but rarely can find lesions of the bullous edema, at the bladder dome [1,13], or a tumoral lesion [18]. In our series, cystoscopy was not indicated to make the diagnosis of enterovesical fistula.

Actually, the most useful exams for diagnosis are cystoscopy (74%) and CT scan (52%) [24]. Enteral administration of indocyanine green solution was indicated to detect enterovesical occult microfistulae in patients with CD before the fistulae had become readily apparent. After oral or rectal administration of the indocyanine green solution, urine was collected and examined using a colorimeter to check for contamination with indocyanine green. The sensitivity of this test is about 92%, higher than other conventional examinations [25].

The management of internal fistulae has changed substantially over the last 2 decades. Resection was previously the only treatment, but now more conservative alternatives, including medical therapy and surgical repair, are available [14]. However, the efficacy of medical therapy for internal fistulae has yet to be shown in randomized, controlled trials. When treating Crohn urodigestive fistulae, practitioners oppose supporters of medical treatment first to those of surgical treatment.

Medical treatment of fistulae with antibiotics and/or immuno-modulators (corticosteroids, azathioprine, mesalamine, and cyclosporine) has been used successfully, but the small sample size did not allow accurate conclusions. However, the potential of infliximab was already mentioned in 2002 [5]. Since then, other authors have proposed the use of infliximab, after formally eliminating tuberculosis, in the initial treatment of CD fistulae, leaving surgery as the secondary treatment of strictures or abscesses [3,26,27]. 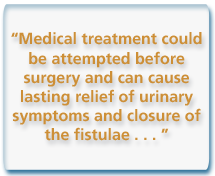 Medical treatment could be attempted before surgery and can cause lasting relief of urinary symptoms and closure of the fistulae [13,16,28,29], but medical treatment failure is frequent [10]. The discomfort associated with the existence of persistent urinary fistulae (fecaluria), associated complications of CD (intestinal obstruction, abscess, and abdominal mass) [1,13,16,17], or the threat to renal function in chronic infection [1,13,30] often lead to surgery as a primary treatment. The indication for surgery in our patient was the presence of large enterovesical fistulae causing pneumaturia and fecaluria.

Current approaches associate antibiotics, total parenteral nutrition, and various combinations of immuno-modulatory agents. However, only a minority of fistulae subsides under this treatment [26]. Thus, surgery remains the treatment of choice [31]. The principles of surgery are simple: intestinal resection (ileal resection or a subtotal colectomy if the sigmoid colon is involved) and closure of the bladder orifice [1,10,13,16,17,30]. Surgery rarely includes partial cystectomy [32]. The extent of bowel resection should be tailored to actual lesions from CD [13]. Strictureplasty [33] is occasionally appropriate when the ileal segment is short or if a patient has had multiple, previous small bowel resections. An enterostomy may be necessary to prevent the risk of postoperative digestive fistulae because of the importance of local lesions (abscesses), the extension of CD, medical treatment prior to surgery (corticosteroids and immunosuppressants), a patient’s very poor general condition, and the large number of associated fistulae complicating the surgical procedure [1,2,16]. It is almost a 2- to 3-month temporary enterostomy [1]. In our case, treatment consisted of an ileal resection with or without ileostomy and bladder fistulae closure.

Postoperative enterovesical fistulae may occasionally occur due to an anastomotic leak [1,2,10,16]. This is usually associated with an abscess, which communicates with the bladder. Most of these fistulae close spontaneously with bladder drainage but if the fistula persists the anastomosis should be resected and the defect in the bladder closed over an indwelling catheter. There is very little evidence to justify the use of parenteral nutrition in enterovesical fistulae [10].

The risk of recurrence is very low [6]. Maintenance therapy may be required in some cases with severe relapse and complicated and extensive involvement to prevent fistulae recurrence after surgery. The question of the appropriate drug is still debated: thiopurine, anti-TNF, or infliximab [8,23].

The incidence of enterovesical fistulae in CD is low. The pneumaturia and fecaluria are the most significant symptoms for their presence. A CT scan is a very useful preoperative diagnostic tool for identifying gas within the bladder. Barium or Fastrografin studies are useful also. Treatment, based on a resection of the diseased bowel and extirpation of the fistula, can be accomplished with minimal morbidity and mortality.