Intermittent catheterization (IC) is the preferred procedure for individuals with incomplete bladder emptying from non-neurogenic or neurogenic lower urinary tract dysfunction (NLUTD). IC is now considered the gold standard for bladder emptying in individuals following spinal cord injury (SCI) who have sufficient manual dexterity (Groen et al., 2016; Wyndaele et al, 2012). Goals of bladder management in individuals with a SCI include prevention of infection, injuries or trauma, optimizing social continence and function, and preventing upper tract deterioration. Despite these recommendations, complications and adverse events can arise in both men and women but are seen especially in male patients performing intermittent self-catheterization (ISC) for long-term.

Despite improvements in catheter material and properties, complications such as UTIs and urethral injuries are still prevalent and negatively impact the person’s quality of life.  Walter et al (2020) reported an 84% (109/130) overall prevalence of self-reported complications associated with IC in wheelchair athletes.  Of these wheelchair athletes with a SCI, median duration of performing IC was 10 years. Twenty-seven percent (29/109) sustained urethral injuries and 63% (69/109) had at least one episode of UTI during the last 12 months. More than 40% of these patients reused their catheters which exposed them to an increased risk for UTIs. Ninety percent (26/29) of all urethral injuries were reported by individuals with a cervical SCI. Almost one-fourth of male athletes (22/95, 23%) had a history of inflammation/infection of genital organs associated with IC.

Complications can include urethral/scrotal events can include bleeding, urethritis, stricture, the creation of a false passage, and epididymitis. Bladder-related events can cause UTIs, bleeding, and stones. The most frequent complication of IC is a catheter-associated urinary tract infection (CAUTI).  It is unclear which catheter types, techniques or strategies, affect the incidence of UTI.

Urethral problems, seen primarily in men, include urethritis or inflammation of the urethral meatus from frequent catheter insertion. 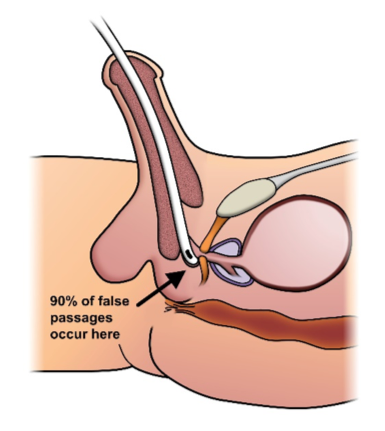 Urethral bleeding is frequently seen in patients when first starting IC and can occur regularly in one-third of patients performing ISC on a long-term basis. Persistent bleeding in a patient who has been performing ISC long-term may be a sign of a UTI.

A more common urethral adverse event seen primarily in men who self-catheterize for years is the creation of a false passage.  Men with persisting urethral strictures or who have an enlarged prostate are at increased risk. The false passage may occur at the site of the external sphincter, just distal to the prostate.

Urethral trauma or injury can occur in both men or women due to the use of a poorly lubricated catheter or forcible catheterization in a urethra, causing spasms.  It is believed blind catheterization may lead to both urethral bleeding and the formation of a false passage.

Urethral strictures can occur in the anterior portion of the male urethra (meatus, penile-pendulous urethra, bulbar urethra) or in the posterior portion (membranous urethra and prostatic urethra).

Cornejo-Dávila et al. (2017) reported a 4.2% rate of IC-related urethral strictures in a cohort of 333 males with a SCI.  These strictures may be the result of an inflammatory response to 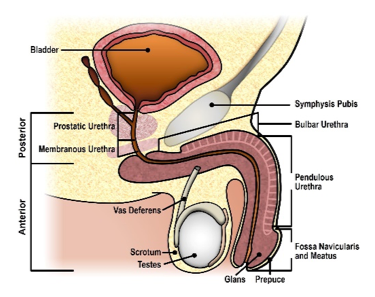 repeated trauma and are seen more often in patients who perform ISC. Strictures are also seen more often in patients using latex catheters.  This is felt to be related to cellular toxicity due to elutes from rubber causing urethral erosion over time, particularly in males (Bailey & Jaffe, 2017).  A difficult catheter insertion may be a sign of the presence of a urethral stricture. Increased frequency of catheterization may correlate with fewer urethral changes. This may be because individuals who regularly perform ISC are more skilled in catheterization, and therefore, have less chance of urethral trauma. Repeat catheterization, however, may induce local traumatic reactions of the urethral wall, especially in male patients performing ISC longer than 1 year. It is believed that the surface of the catheter is an important factor, with less stricture development when hydrophilic catheters are used. If a stricture is suspected, a retrograde urethrogram or voiding cystourethrogram should be considered. Prevalence of urethral strictures and false passages may increase with longer use of IC or with traumatic catheterization.

Epididymitis, or epididymorchitis (inflammation of the epididymis and testes), is one of the most common genital infections in men with SCI who perform ISC. This infection appears to be more common in men who have a urethral stricture. Prevalence of this complication of IC has been reported to be between 2% to 8%. Epididymitis has been reported in 10% to 29% of patients who perform IC using PVC catheters (Stohrer, 2009) and in 6% in patients using low-friction hydrophilic catheters.  Men may also experience prostatitis, which can cause UTIs.

Hematuria is frequently seen in the initiation of IC but should not be a persisting problem. New-onset hematuria may indicate a UTI or a stricture.

Bladder stones are seen in both men and women and are thought to be caused by the introduction of pubic hair or loss of the catheter in the bladder.  Stone formation is more common in patients performing long-term ISC. There have been anecdotal reports of short catheters with a smooth, soft funnel end being inserted and lost in the bladder.

Only a few cases of squamous cell cancer of the bladder in patients performing ISC have been reported in the literature.

UTI is the most frequent complication in patients performing IC. Catheter-associated UTI (CAUTIs) is of concern because when urethral damage occurs, the mucosal barrier to infection is compromised. The bladder wall is susceptible to bacteria that circulate in retained urine. When the bladder becomes stretched from retained urine, the capillaries become occluded, preventing the delivery of metabolic and immune substrates to the bladder wall

Findings from Mitchell’s 2021 systematic review indicate that the frequency of people experiencing 1 or more UTIs per year while undertaking IC in the community is substantial, ranging from 15.4% to 86.6% per year.

In a large (N = 912) community-based population of individuals with SCI, half of which were women, women reported a significantly greater number of UTIs than men (p = 0.003). Predictor factors of UTI included high mean catheterization volumes and non-self-catheterization (someone other than the patient performs the catheterization). 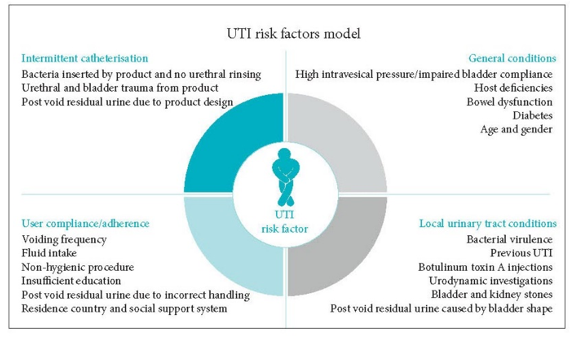 CAUTI is the most frequent infection after SCI, with an average of 2.5 episodes per year

Many persons with SCI who use urinary catheters for bladder management have bacterial colonization of their bladder. These patients are at higher risk than the general population for developing a UTI and renal deterioration. UTIs can be the result of re-use of the same catheter for multiple catheterizations, poor catheterization technique, or the passing of the catheter through a normally very contaminated area of the urethra before the catheter reaches the bladder. An in-vitro model by Cortese and colleagues (2020) demonstrated that a single catheter insertion can initiate a CAUTI.

A CAUTI may also be caused by the formation of biofilms (micro-organisms that colonize the internal surface of catheters). In patients with indwelling urinary catheters, these biofilms can contain up to 16 different strains of bacteria!  Common bacteria is Ecoli.   Under unfavorable conditions, such as re-use of a catheter, organisms can detach from the biofilm and become free floating in the urine, which can lead to symptomatic infection.  Newman and colleagues (2020) collected and studied microbial and debris contamination on reused catheters from 39 patients. All collected reused catheters (100%) were contaminated by debris and 74% (95% CI [58–87%]) were contaminated by microorganisms, some with biofilm.

Repeated CAUTIs can lead to patient dissatisfaction and discontinuation of IC. The Neurogenic Bladder Research Group spinal cord injury registry (Patel et al., 2020) reported on factors associated with discontinuation and dissatisfaction with ISC.  They identified 176 (56.9%) had used ISC in the past and discontinued this management for suprapubic indwelling catheter (113, 64%), indwelling urethral catheter (52, 29.5%), or urinary conduit (12, 6.8%).  The top three self-reported reasons for ISC cessation were inconvenience, urinary leakage, and too many UTIs.

Despite the risk of CAUTI in patients performing IC, prophylactic antibiotics are not recommended and urine cultures should only be obtained from individuals with symptoms of a UTI. Cox and colleagues (2017) reported on their institution’s use of daily intravesical gentamicin instillations for the prevention of UTI in patients with neurogenic bladder on ISC who have a history of very frequent symptomatic UTI. In patients with an internal prosthesis (pacemaker, heart valve), the use of prophylactic antibiotic therapy is often recommended (American Urological Association, 2008). The evidence remains unclear, either way, as to whether using antiseptics (e.g. methenamine) prior to urinary catheterization, will reduce the incidence of UTI in this population.

Busy patient lifestyles, especially for those who are mobility-impaired, and lack of access to more public places with restrooms may further increase the risk of UTI. Also, the longer the time frame an individual catheterizes, the incidence of UTI increases. Overlooking basic hygiene prevention techniques could lead to serious health problems.