This website uses cookies to ensure you get the best experience on our website. Privacy Policy
Published 03 December 2020
(UroToday.com) In the second Prostate Cancer session at this year’s Society of Urologic Oncology virtual annual meeting, Dr. Cora Sternberg provided an update on the PROSPER Trial, Safety and Efficacy Study of Enzalutamide in Patients With Nonmetastatic Castration-Resistant Prostate Cancer (PROSPER).

She began highlighting the background of patients with non-metastatic prostate cancer. Based on historical data, these patients have rapid progression to metastases when prostate-specific antigen (PSA)-doubling times are less than 10 months, with median bone metastasis-free survival of 25-30 months.

In other prostate cancer disease spaces, we’ve seen that starting treatment earlier can improve survival, as evidenced by the use of docetaxel, abiraterone, and other agents in the metastatic hormone-sensitive disease space.

Dr. Sternberg then described the methodology of the PROSPER trial, examining enzalutamide in non-metastatic castration-resistant prostate cancer (CRPC). The methodology of the PROSPER trial has previously been reported and published. In brief, men with non-metastatic castration-resistant prostate cancer, PSA doubling time ≤ 10 mo, and PSA ≥ 2 ng/mL at screening were randomized in a 2:1 fashion to enzalutamide 160mg or placebo, in addition to continuing androgen deprivation therapy. Notably, nmCRPC was defined on the basis of testing with bone scan and CT scan.

The primary outcome was metastasis-free survival, with overall survival as a key secondary outcome. Notably, Dr. Sternberg emphasized that, in the open-label extension, 87 patients crossed over from placebo to enzalutamide.

Assessing the primary endpoint of metastasis-free survival, enzalutamide the median metastases free survival (MFS) by 21.9 months, reducing the risk by 71%.

Similarly, enzalutamide was effective in both prolonging time to first use of subsequent anti-neoplastic therapy and improving overall survival. 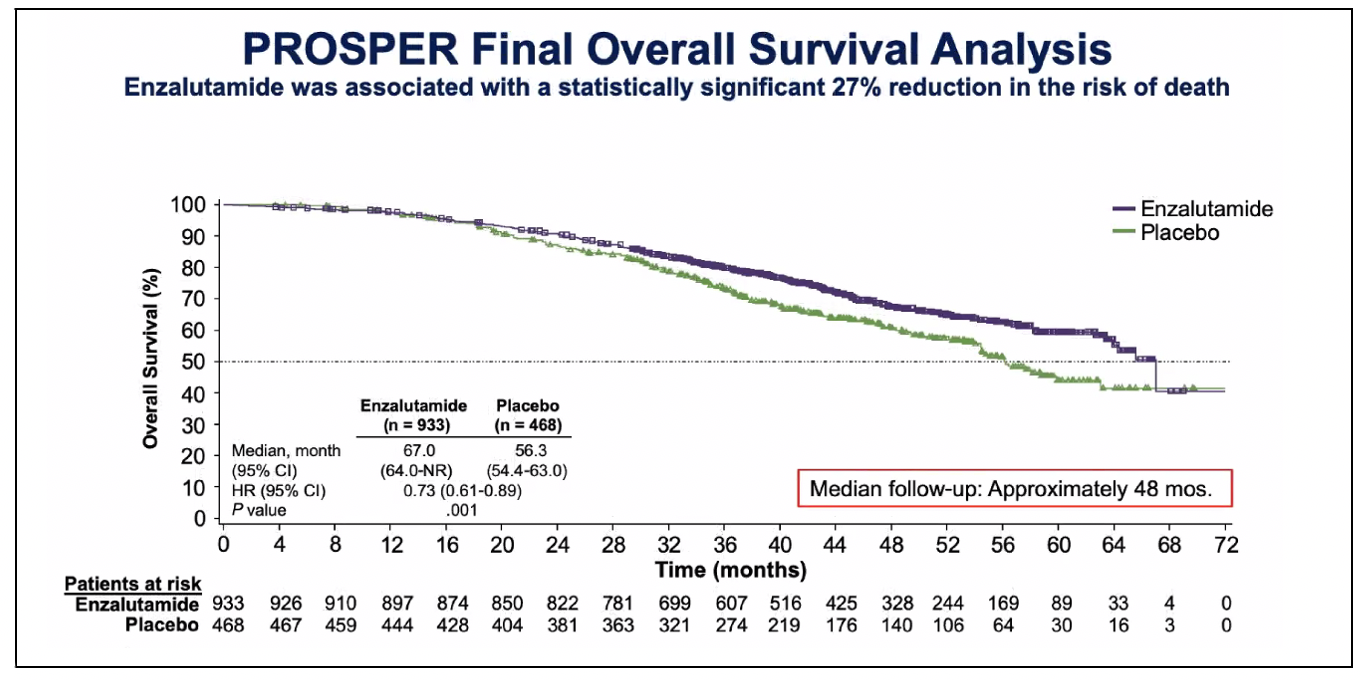 This is in spite of the fact that subsequent anti-neoplastic treatments were commonly employed in the control arm with 84% of patients receiving some therapy, abiraterone being the most common.

Further, subgroup analyses demonstrated that, with respect to overall survival, the efficacy of enzalutamide was consistent across nearly every subgroup. Dr. Sternberg did note potentially discordant results among patients receiving bone targeting agents though emphasized that this represented less than 10% of the study cohort and thus conclusions are hard to draw.

Dr. Sternberg then provided a comparison to the other two key trials in nmCRPC, SPARTAN (assessing apalutamide), A Study of Apalutamide (ARN-509) in Men With Non-Metastatic Castration-Resistant Prostate Cancer (SPARTAN), and ARAMIS (assessing darolutamide), Efficacy and Safety Study of Darolutamide (ODM-201) in Men With High-risk Nonmetastatic Castration-resistant Prostate Cancer (ARAMIS).

Methodologically, these trials are very similar apparent from minor differences in inclusion criteria and while they appear to have similar efficacy, no direct head-to-head trials have been performed.