BERKELEY, CA (UroToday.com) - The natural history of patients with renal cell carcinoma (RCC) and metastases at diagnosis (mRCC) is extremely heterogeneous.[1] To date, only 30% of patients undergo cytoreductive nephrectomy (CNT) as primary approach or part of a multimodal therapy 2. In this context, two ongoing phase 3 studies will address the importance of CNT in the targeted therapy era (CARMENA, "Randomized Phase III Trial Evaluating the Importance of Nephrectomy in Patients Presenting With Metastatic Renal Cell Carcinoma Treated With Sunitinib" and EORTC, "Randomized Phase III Trial Comparing Presurgical Sunitinib Followed by Nephrectomy and Sunitinib Versus Nephrectomy Followed by Sunitinib in Patients with Synchronous Metastatic Renal Cell Carcinoma").[3, 4] While preliminary data from those trials are awaited, it is currently clear that the mRCC population cannot be considered a homogeneous cohort of patients due to extremely divergent natural histories among individuals.

The findings have several implications for daily clinical practice. Firstly, according to the current results, data coming from the CARMENA trial and the EORTC trial will also be implicitly applicable to patients with brain metastases, exclusive bone metastases, or multiple metastases at one single organ. Those characteristics, excluded from the CARMENA and EORTC trials, affected roughly 57% of mRCC candidates for surgery in the current paper. Secondly, the current findings strongly affect prognosis evaluation and the indication for adjuvant medical therapy. Specifically, patients with a single organ affected, regardless of unifocality vs multifocality of metastases, and patients with multiple organs affected by single metastases showed the same risk of midterm cancer-specific mortality. Conversely, patients with multiple organs affected by multifocal metastases should be considered at a significantly higher risk of early progression. Finally, the location of metastases, except for feasibility aspects, should not be considered a primary reason for endorsing or dismissing adjuvant treatments. 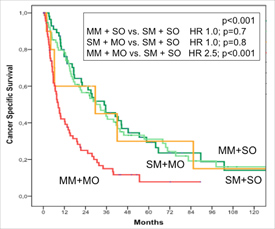 Written by:
Umberto Capitanio, MD as part of Beyond the Abstract on UroToday.com. This initiative offers a method of publishing for the professional urology community. Authors are given an opportunity to expand on the circumstances, limitations etc... of their research by referencing the published abstract.

Effect of number and location of distant metastases on renal cell carcinoma mortality in candidates for cytoreductive nephrectomy: Implications for multimodal therapy - Abstract