BERKELEY, CA (UroToday.com) - Prostate cancer (PCa) is a leading cause of cancer-related death in men and remains incurable when metastasis to distant tissues occurs. Despite the initial response to androgen deprivation therapy, PCa gradually progresses to an unresponsive stage. When this occurs, it is known as castration-resistant prostate cancer (CRPC). A hallmark of CRPC is the high levels of Bcl-2, Bcl-xL, and Mcl-1 proteins that block cell death or apoptosis and protect CRPC cells from the first line treatment with the antimitotic drug docetaxel. Therefore, chemotherapy strategies that counteract the protective effects of Bcl-2, Bcl-xL, and Mcl-1 proteins should improve docetaxel treatment. 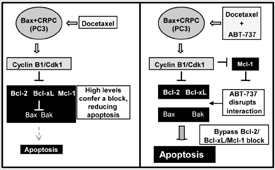 ABT-737 is a small molecule antagonist of Bcl-2 and Bcl-xL, but, unfortunately, not of Mcl-2. Numerous reports demonstrate that cancer cells become resistant to ABT-737 by increasing Mcl-1. The work presented in this publication describes the detailed mechanisms of how the combination of ABT-737 with antimitotic drugs (docetaxel and a new agent ENMD-1198) increases apoptotic cell death in PCa and CRPC cells. Our results show that the pro-apoptotic protein Bax (which binds to Bcl-2 and Bcl-xL when inactive) is a more important factor compared to Mcl-1 in conferring sensitivity to the ABT-737 plus docetaxel/1198 combination. Therefore, we believe that determining the percentage of Bax-positive cells in human PCa specimens will provide a useful biomarker for identifying patients who respond to ABT-737 treatment.

Once CRPC patients fail docetaxel chemotherapy, only the docetaxel derivative cabazitaxel confers a slightly longer overall survival. To further improve overall survival of CRPC patients, a better mechanistic understanding of docetaxel-induced CRPC cell death is required in order to develop more effective combinatorial treatments. Antimitotc drugs such as docetaxel function by binding microtubules and blocking the progression of mitosis. During a normal mitosis, there is a dramatic increase in the protein cyclin B1, which then activates its partner cyclin dependent kinase 1 (Cdk1) to modify many proteins, including Bcl-2, Bcl-xL, and Mcl-1. To complete mitosis, the levels of cyclin B1 and Cdk1 activity must decrease before chromosomes can separate towards newly divided cells. Antimitotic drugs such as docetaxel prevent the degradation of cyclin B1, resulting in Cdk1 hyperactivity, inactivation of Bcl-2/Bcl-xL, and reduction of Mcl-1, a major mechanism linking mitotic arrest to the induction of apoptosis in PCa cells. Overall, our data suggests that the high levels of anti-apoptotic proteins in Bax-expressing CRPC cells can be overcome by targeting Bcl-2/Bcl-xL with ABT-737 and Mcl-1 with antimitotics.

Navitoclax, previously known as ABT-263, is an orally bioavailable analog of ABT-737, with identical function, that is currently in Phase II trials for refractory lymphoid malignancies and solid tumors and appears to be a promising agent for use in combination with docetaxel. Our results provide a strong mechanistic rationale for combining targeted chemotherapy against Bcl2/Bcl-xL, as with navitoclax, with the currently approved drug for CRPC (docetaxel), which targets the destruction of Mcl-1, a navitoclax resistance factor. With the addition of cabazitaxel to help in the treatment of patients who develop docetaxel-resistance, it is also likely that the combination of cabazitaxel and navitoclax will further improve overall survival.

Written by:
Carlos Perez-Stable, PhD as part of Beyond the Abstract on UroToday.com. This initiative offers a method of publishing for the professional urology community. Authors are given an opportunity to expand on the circumstances, limitations etc... of their research by referencing the published abstract.