BERKELEY, CA (UroToday.com) - In this recent study by Ju, et al., mRNA-based diagnostic and prognostic tests were developed and used to interrogate two retrospective clinical studies.[1] This diagnostic prostate cancer signature showed an ability to distinguish normal from cancerous prostate glands in men who had several elevated PSA blood tests. The new diagnostic test demonstrated a predictive value for prostate cancer of 98-99%. The new prognostic test was used in a blinded study to sub-stratify patients, and identified a group of patients with a substantially reduced recurrence- free survival by Kaplan-Meier analysis (Figure 1). These diagnostic and prognostic tests may represent an advance in management of patients with prostate cancer.

Traditional screening for prostate cancer has included serial serum PSA testing and digital rectal examinations with prostate biopsy mandated for a definitive diagnosis. Overall, PSA testing has a positive predictive value of only 30%.[2] Recent investigations to improve the accuracy of PSA-based screening have included other PSA-based blood tests, urine tests including the analyses of shed prostate epithelial cells, and genomic information from the prostate cancer tissue for risk assessment. The total prostate-specific antigen (PSA), the “standard” clinical laboratory test is measured by immune assays and includes a number of isoforms of PSA including inactive and complex forms. PSA derivatives, including free PSA (FPSA), complex PSA (cPSA bound to α1 anti-trypsin) and the latest approved PSA-based test is known as the “phi” or Prostate Health Index that relies on a calculation based on pro-PSA (p2PSA), an isoform cleaved to free PSA. Additional PSA test modifications include PSA velocity or PSA doubling time, PSA density, age adjusted PSA and several other PSA isoforms. However, these have not yet provided a consistent or generally adopted use in PSA-based testing. Further, the ideal cut-off values for many of the PSA-based assays are unclear. A number of factors can interfere with the normal range of PSA, including local inflammation or infection and a variety of medications, most prominently 5 alpha reductase inhibitors, and others such as non-steroidal anti-inflammatories and statins may reduce PSA levels. Typically, Caucasians have lower PSA levels when compared with African Americans. Recommendations on PSA screening vary between authoritative organizations and the risk and benefits of prostate cancer screening are often controversial.[3] A variety of groups have recently updated their recommendations and guidelines for prostate cancer screening such as the American College of Preventive Medicine, American Cancer Society, American Urological Association, European Association of Urology, National Comprehensive Cancer Network and the United States Preventive Services Task Force (summarized in Table 1, adapted from Roobol and Carlsson [4]).

Urine markers derived either from RNA, DNA or proteins, are being developed as diagnostic and prognostic tests. RNA-based urine biomarkers include Prostate Cancer Antigen 3 (PCA3), the TMPRSS2-ERG gene fusion, and transcript expression levels of SPINK1 and GOLPH2. PCA-3 is currently FDA approved for determining prostate cancer risk in men with a previous negative biopsy. Meta-analysis of 14 clinical studies using the PCA3 urine test have demonstrated a sensitivity of 46.9-82.3% and a specificity of ~56-89%. Without a consensus on the appropriate cutoff level, a comparison of PSA and PCA3 were used to generate area under the curve (AUC) values of 0.58 and 0.64 for PSA and PCA3, respectively. Current prostate cancer data relating to other urine biomarkers, such as annexin 3, matrix metalloproteinases, and urinary-to-serum PSA ratios have provided contradictory conclusions on the utility of these tests and warrant further analysis. DNA-based urine markers have focused on panels of genes that are hyper-methylated in prostate cancer, including GSTP1, however larger clinical studies are needed to validate its utility.

Several commonly used “risk calculators” have served as useful complimentary tools in the management decision making process and in patients with prostate cancer. Risk calculators which consider patient age, PSA levels family history, digital rectal exam findings and the results of prior prostate biopsies have been shown to improve the risk estimations of PSA alone.[4]

Recently reported genomic assays that are tissue-derived are primarily used to assess risk of cancer progression and provide prognostic information and are not approved for initial diagnosis. Advances are needed in the detection and discrimination of aggressive prostate cancer, the leading cancer in men in the US.

Recently, analyses of mRNA from the prostates of patients have been used to determine gene expression signatures that either predict patient outcome (prognostic test) or discriminate benign from malignant prostate tissue in patients with serially elevated PSA (diagnostic test). These studies include a 12-gene signature model,[5] a 4-gene signature,[6] a 32-gene prognostic index,[7] a 7-gene signature,[8] and the diagnostic and prognostic tests described by Ju et al..[1] The gene expression signatures in most of these studies were developed using the clinical samples to both derive the signature and to test its predictive value. In contrast, the studies by Ju et al.,[1]derived an oncogene signature by comparing isogenic oncogene transformed cell lines with non-transformed prostate epithelium, then using the signature derived thereby to define two distinct patient groups and interrogate clinical outcome.

We therefore conducted an analysis in order to compare the predictive value of these tests, we analyzed the Myc-induced 14-gene “ProstaGene” prognostic signature for an association with recurrence free survival in datasets GSE25136 and GSE21032, as previously described.[1] To provide a direct comparison with a previously published 7-gene signature that was analyzed in a 42-sample subset of the GSE25136 dataset,.[8] the Myc signature was reanalyzed in the identical subset of 42 samples. Differences in survival among favorable and unfavorable outcome groups were evaluated using Kaplan Meier plots and hazard ratios, and tested for significance using the log rank p value.

Results for the Myc-induced prognostic signature were compared against the performance of previously published 12-gene model,[1] 7-gene signature,[8] and a 4-gene signature.[6] Both the 12-gene model and 7-gene signatures were evaluated as prognostic indicators of recurrence-free survival using normalized data from GEO accession GSE25136 at the time of their original publication. In this review, these two signatures were adapted for analysis in an additional dataset, GEO accession GSE21032.[9] Classification based on the 12-gene model in dataset GSE25136 was originally performed using unsupervised hierarchical clustering, which segregated patient samples into two distinct population clusters. This classification scheme was generalized by mean-centering the 12 genes and averaging the sample profiles within each of the two clusters, to create cluster centroids representing both favorable and unfavorable outcomes. The GSE21032 dataset was centered on mean expression for the 12 genes and samples were identified with favorable or unfavorable outcomes with a nearest-centroid classifier using the spearman correlation among the 12 genes as a distance metric.

Full details on the 7-gene signature prognostic algorithm were not provided in the original publication, but tumor/normal fold change values are available and were adapted for analysis in the GSE21032 dataset and reanalysis of the GSE25136 dataset. The Spearman correlation coefficient, computed for each sample against the log2 fold change values for the 7 genes, was used as a prognostic index. This approach was found to perform slightly better than the original algorithm when evaluated in the GSE25136 dataset, so it was also applied to the GSE21032 dataset. A threshold for dividing favorable and unfavorable outcomes in this dataset was selected to maximize the hazard ratio. An alternative, more naïve approach was applied by simply using the average expression of the seven genes to represent a prognostic score.

A comparison was made of the prognostic signature, (a “Prostagene prognostic signature”) developed by Ju et al. to the prognostic tests described in prior publications by Bismar et al., Chen et al., and Ding et al.[5, 6, 8] The ability of each signature to differentiate poor clinical outcome patients from favorable clinical outcome patients was evaluated in clinical data sets from the studies of Taylor[9] and of Goodison[10] and compared using hazard ratios and log-rank p-values, as shown in Table 2. The hazard ratio represents the rate of recurrence in the poor outcome group (Figure 1; red curves) vs. the rate of recurrence in the favorable outcome group (Figure 1; blue curves), where a higher hazard ratio indicates better discrimination between poor and favorable outcome groups. Results in these datasets demonstrate the ability of the prognostic test developed by Ju et al.[1] to discriminate two distinct patient outcome populations with greater significance when compared to previously developed diagnostic signatures (p-values in Table 2).

In summary, a number of distinct gene expression based prognostic signatures have been defined and used to define patient subgroups with distinct clinical outcomes. The comparisons conducted herein suggest a gradual improvement in the discriminative value of these genomic tests. Further studies will be required to compare the robustness of these signatures. It will be of value to conduct further retrospective and prospective studies directly comparing each of the currently reported expression signatures.

Although at this time tests based on mRNA profiling of the primary prostate tissue have shown high discriminative value for prostate cancer, the transition of these diagnostic tests to a clinical setting will require less invasive approach, such as a urine-based mRNA profiling technique. Such a transition would potentially reduce the substantial morbidity and cost of unnecessary prostate biopsy conducted each year, due to the false positive rate of PSA tests. 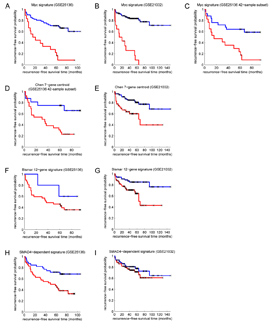 Figure 1. (A-C) The 14 gene oncogene-mediated “prostagene” signature of Ju et al. was analyzed for an association with recurrence-free survival in datasets GSE25136 and GSE21032 with comparison made to (D,E) the gene signature developed by Chen et al. (F,G) the 12 gene signature of Bismar et al. and (H,I) the 4 gene signature of Ding et al.

Written by:
Adam Ertel,a, c Mathew Casimiro,a, c Leonard G. Gomella,b, c Xiaoming Ju,a, c and Richard G. Pestella, c as part of Beyond the Abstract on UroToday.com. This initiative offers a method of publishing for the professional urology community. Authors are given an opportunity to expand on the circumstances, limitations etc... of their research by referencing the published abstract.