BERKELEY, CA (UroToday.com) - The value of sonography combined with color Doppler sonography and power Doppler sonography (PDS) in the detection of prostate cancer has given rise to a great many evaluations. The increasing use of individual screening and the increased number of biopsies has led to the early detection of progressively smaller lesions. In view of these small lesions, the value of the PDS was low since a significant number of sometimes little-differentiated cancers were non-palpable and not visible. The only known value of the PDS was that of directing the biopsies when a suspect area was detected. Among the small lesions thereby detected, some well-differentiated lesions may be qualified as latent, painless, or non-significant. They are at the origin of an over diagnosis involving 40% of patients treated. The risk of over diagnosis and overtreatment of a lesion has, until now, been underestimated, and the active surveillance protocols proposed are probably not adapted to the psychological profile of each patient.

Technical progress in Doppler sonography and a better understanding of its value and limits may help better integrate it into a diagnostic approach. Also the question of the probability of not having an evolving high-risk lesion in prostate biopsies in patients with a normal DRE, a PSA level between 4 and 10 ng/ml, and a prostatic transrectal sonography with a normal PDS examination was asked. A series of 243 consecutive patients with a PSA level less than 10 ng/ml and a DRE without anomaly had PDS-guided biopsies: 12 to 15 samples were systematically taken and echo-guided in the suspect areas. The PDS results were rated from 1 to 4: 1) normal, 2) slightly hypoechogenic avascular area in which the hypo-echogenicity disappears after compression by probe, 3) hypoechogenic avascular area, and 4) hypoechogenicvascularised area with power Doppler Sonography (Figure 1). Patients rated 3 or 4 were considered to be pathological. D’Amico’s criteria were used to assess the risk of a biological recurrence after treatment and those of Dall’Era were used to select the patients who could benefit from active surveillance (AS). The PDS was considered to be a true positive if at least one biopsy was positive in the same sextant as the suspect image. 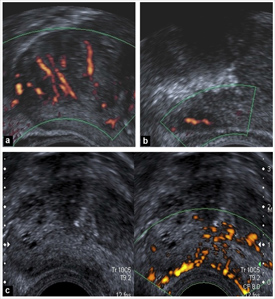 The negative predictive value of the PDS may significantly modify the risk of having or not having an aggressive lesion and may weigh the statistical risk of the PSA level. The negative predictive value of the MRI exceeds 90% -- with an accuracy of 98% -- in the diagnosis of significant cancers, independent of the fact that its high sensitivity also favors the over diagnosis of a great many lesions under 0.5 cc.

D’Amico’s criteria to assess the risks of biological recurrence after treatment have gained a wide consensus .The criteria proposed by Dall’Era (Table 1) are most often used in Europe and have been validated over long periods of time. Studies on cohorts of patients with clinically localized and non-treated prostate cancer have shown that the overall survival of patients with a Gleason score less than 7 is excellent. 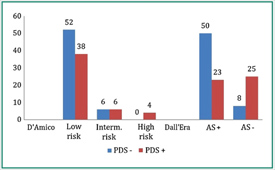 Table 1: One-hundred-six patients with cT1c cancer: Results of the power Doppler sonography (PDS) according to the D’Amico risk criteria and active surveillance (AS) by Dall’Era.

Therefore, after 20 years, the specific survival of the patients ranges from 70 to 90%. Sonography, coupled with the Doppler examination, remains an examination that is easily accessible and inexpensive. Its performance may be improved by the rules of good practice that still have to be determined.

Twenty-eight percent of all cancers diagnosed in our series were T1c cancers where the PSA level did not exceed 10 ng/ml and that were not visible in the PDS. Eighty-nine percent of these cancers involved a low-risk of biological recurrence and 86% of the cases could benefit from active surveillance according to the Dall’Era criteria, after the biopsies. Patients with a PSA level not exceeding 10 ng/ml, without a DRE anomaly, and with a negative PDS (35% of the subjects tested) had less than a 5% risk of having a high-risk cancer. In these patients, the biopsies probably could be differed and carried out on the basis of arguments other than only the initial assay of the PSA level in order to limit the number of unnecesary biopsies and reduce the risks of over diagnosis.

J.-L. Sauvain,* and E. Sauvain** as part of Beyond the Abstract on UroToday.com. This initiative offers a method of publishing for the professional urology community. Authors are given an opportunity to expand on the circumstances, limitations etc... of their research by referencing the published abstract.