Researchers at the University of Michigan Comprehensive Cancer Center have identified a genetic anomaly that may drive the aggressive spread of a rare subset of prostate cancers. 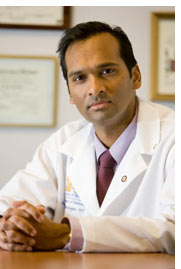 They found mutations of a gene called KRAS, which is known to play a role in numerous cancers but is rarely associated with prostate cancer. The mutation – in which two pieces of the chromosome change places and fuse together – was seen only in metastatic prostate cancer, an advanced form in which the disease has spread to distant parts of the body.

“This study suggests that in a rare subset of prostate cancers, KRAS rearrangement acts as a mechanism that may promote tumor progression. We speculate that prostate cancers with this rearrangement are more aggressive, since we have found them only in metastatic disease,” says senior study author Arul Chinnaiyan, M.D., Ph.D., director of the Michigan Center for Translational Pathology and a Howard Hughes Medical Institute Investigator.

Results of the study appear in Cancer Discovery, a new journal from the American Association for Cancer Research.

In 2005, Chinnaiyan and his team identified a prostate-specific gene called TMPRSS2 that fuses with a cancer-causing gene called ERG. In this new study, the researchers found the KRAS gene fusion occurred only in cells that did not have the more common gene fusion. The team also discovered in 2010 gene fusions that occur in a pathway called RAF.

“This suggests that prostate cancer can find different ways to activate a molecular pathway by creating gene rearrangements in at least these three ways,” says Chinnaiyan, S.P. Hicks Endowed Professor of Pathology at the U-M Medical School.

This implies that, like breast cancer, prostate cancer likely has different subtypes that will need different, targeted treatment strategies. Chinnaiyan estimates the KRAS rearrangement occurs in 1 percent of prostate cancers, but may represent a higher percentage of metastatic prostate cancer.

Prostate cancer statistics: 217,730 Americans will be diagnosed with prostate cancer this year and 32,050 will die from the disease, according to the American Cancer Society

Disclosure: Prostate cancer gene fusions, including the ETS, RAF and RAS fusions, have been licensed to Gen-Probe by the University of Michigan. Chinnaiyan is named as an inventor on those patent applications and serves as a consultant to Gen-Probe.