Researchers at the University of Michigan Comprehensive Cancer Center have identified a potential target to treat an aggressive type of prostate cancer. The target, a gene called SPINK1, could be to prostate cancer what HER2 has become for breast cancer. 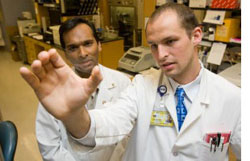 Like HER2, SPINK1 occurs in only a small subset of prostate cancers – about 10 percent. But the gene is an ideal target for a monoclonal antibody, the same type of drug as Herceptin, which is aimed at HER2 and has dramatically improved treatment for this aggressive type of breast cancer.

“Since SPINK1 can be made on the surface of cells, it attracted our attention as a therapeutic target. Here we show that a ‘blocking’ antibody to SPINK1 could slow the growth of prostate tumors in mice that were positive for the SPINK protein,” says study author Arul Chinnaiyan, M.D., Ph.D., director of the Michigan Center for Translational Pathology and a Howard Hughes Medical Institute Investigator.

The study appears in the March 2 issue of Science Translational Medicine.

The researchers additionally found that SPINK1 can bind to a receptor called EGFR. They tested a drug that blocks EGFR, cetuximab, which is already approved by the U.S. Food and Drug Administration, and found that this also reduced the cancerous effects of SPINK1.

Using mice, researchers first tested a monoclonal antibody – a type of targeted treatment designed to go after a specific molecule (in this case, SPINK1). They then tested cetuximab. Tumors treated with the SPINK1 antibody shrunk 60 percent, while tumors treated with cetuximab shrunk 40 percent. By combining the two drugs, tumors were 74 percent smaller.

Previous studies that looked at cetuximab for metastatic prostate cancer have been disappointing, with only 8 percent of patients showing some benefit. The researchers suggest that the poor results may be because the treatment is appropriate only for patients with SPINK1-positive tumors.

“About 10 percent of prostate cancer patients are SPINK1-positive and strategies to block SPINK1 signaling may have utility in this subset of patients. These studies should stimulate the development of antibody-based therapies against SPINK1 or targeting of EGFR in SPINK1-positive cancer patients,” says study author Bushra Ateeq, a research fellow at the U-M Medical School.

“This non-invasive form of screening could be helpful in the molecular categorization of prostate cancer patients and administering therapies in a molecularly guided fashion,” says Chinnaiyan, S.P. Hicks Endowed Professor of Pathology at the U-M Medical School and an American Cancer Society Research Professor.

The study suggests that side effects were limited in mice. Future studies will need to determine whether targeting SPINK1 in humans would affect normal tissue. The researchers will also look to further understand why SPINK1 is elevated in a subset of prostate cancers. Clinical trials testing SPINK1 therapies are not available at this time.

Prostate cancer statistics: 217,730 Americans will be diagnosed with prostate cancer this year and 32,050 will die from the disease, according to the American Cancer Society

Disclosure: The University of Michigan has filed for patents on SPINK1, on which Chinnaiyan and Tomlins are named as inventors. The diagnostic field of use has been licensed to Gen-Probe Inc., who was not involved in the design or funding of these studies.