Recently, a urotensin-II analog ([Pen5,DTrp7,Orn8] urotensin-II(4–11)) named urantide, has been proposed as a selective and potent UTR antagonist. UT-II mRNA has been detected in tumour cell lines of neural origin.[1,2]

Prostate cancer is the most frequently diagnosed malignancy and the second leading cause of cancer-related death for men in industrialized countries. Androgen deprivation and androgen receptor blockade have been the mainstays of treatment for prostate cancer. Although initially effective, hormone therapy fails for the majority of initial responders, as subpopulations of tumor cells undergo mutations and gain capacity to proliferate in an androgen-deprived environment. [1] The range of severity in prostate cancer is highly variable, ranging from indolent to highly aggressive disease. Clinicians have limited ability to estimate survival in patients with newly diagnosed prostate cancer, and uncertainty exists about optimal treatment decisions,[3] especially for men with localized disease. Current clinical strategies [4] for evaluating prognosis in prostate cancer at the time of diagnosis include the determination of anatomical extent, histologic grade (Gleason score), and serum levels of prostate-specific antigen (PSA). The Gleason score is a widely accepted score system able to predict the aggressiveness of prostate cancer.[5] However, Gleason score interpretation is subjective and is left to the pathologist’s experience and background. Therefore, searching for homogenous criteria of evaluation is of paramount importance. Another concern linked to Gleason score evaluation is poor predictor potency in the subgroup of patients with Gleason score more or less 7 that has pushed on the finding of molecular markers predictive of response. Consequently, as a novel approach, definite molecular markers able to predict prognosis are potentially relevant prognostic factors.

We have evaluated the correlation between UTR expression and prognosis of human prostate adenocarcinoma and the involvement of this receptor in the regulation of biological properties on both in vivo and in vitro androgen-dependent and -independent prostate cancer models.

UTR mRNAs and protein, evaluated by real time PCR and western blotting respectively, were expressed at high levels only on androgen-dependent LNCaP cells. Moreover, urantide inhibited both cell motility and invasion of LNCaP cells whose characteristic amoeboid movement seems to be advantageous for their malignancy. These effects were paralleled by downregulating the autophosphorylation of FAK and the integrin surface expression on LNCaP cells. UTR downregulation caused by the specific shRNA induced biological effects similar to those triggered by the addition of the antagonist, even if it did not potentiate the effects of the latter, demonstrating that UTR is involved in both motility and invasion of human androgen-dependent prostate cancer cells. The effects on cell motility and invasion were likely due to the inhibition of RhoA activity induced by both urantide and shRNA UTR.

In order to investigate UTR changes occurring in human prostate tumorigenesis, we have also evaluated the expression of UTR in vivo in human prostate tissue samples collected from patients who underwent core biopsy or radical prostatectomy for prostate adenocarcinoma and the results were correlated with other available clinical-pathological parameters. UTR was always expressed at low intensity in hyperplastic tissues and at high intensity in well-differentiated carcinoma (Gleason 2-3). In these human prostate cancers, UTR expression was lost in 10% of tumors and a reduced expression of the protein was significantly associated with higher Gleason score, but not with other clinical-pathological features. Survival analyses by Kaplan-Meier demonstrated that, in univariate analysis, reduced UTR expression was associated with an increased risk of death for disease.

On the other hand, it is noteworthy that reduced UTR expression confirmed to be a negative prognostic indicator of poor survival in the subset of patients with medium and/or high (Gleason score >7) grade tumors. These data demonstrated that UTR staining displayed a significant association with Gleason score, which is an important prognostic factor for prostate cancer patients. Another interesting consideration is that reduced UTR expression confirmed to be an independent prognostic indicator when analyzed in a multivariate model also including Gleason score and tumor stage. A clinical implication of these findings is to establish the prognostic score of patients affected by prostate cancer independently from Gleason score. The definition of the prognosis in these patients is an important and debated issue. In fact, some of these patients continue to have a long-lasting androgen-responsive disease while another group rapidly develops an aggressive and hormone-refractory cancer. Thus, the early definition of the clinical outcome of these patients has important consequences on the choice of the optimal personalized therapeutic and follow-up strategy (see flow chart). Therefore, the research of molecular markers that can be valid alternative and/or additional tools to Gleason score has been widely exploited in the last years,[6] but until now no definitive results have been achieved.

The expression of UTR in the initial Gleason score found in our series supports the role of this receptor in the initial stages of prostate cancer tumorigenesis in which cell movements are important in order to determine the initial invasion of the surrounding parenchyma and the formation of convoluted glands. In the advanced Gleason score, the digestion of the parenchyma by proteases becomes essential for the progression of the cancer that begins to display other phenotypic changes relevant for the spreading in distant organs (lymph nodes and bone). Moreover, the in vitro data suggesting that the function and expression of UTR were closely associated with prostate cancer cell invasion and migration are in agreement with UTR staining which showed a trend of decreasing values with increasing tumor stage. The lack of significance is likely to be attributed to the complex regulation of such phenomenon in vivo. However, the in vivo data further support the role of UTR-dependent pathways in cancer progression in vivo and warrant further studies on this subject that is not the focus of the present manuscript.

In conclusion, we have found a new molecular marker that can be used together with Gleason score in the diagnostic and prognostic definition of prostate cancer patients able to discriminate the patients with good prognosis even within subsets with same Gleason score. Moreover, we have studied the biological role of UTR in prostate adenocarcinoma and obtained data suggesting its involvement in the regulation of cell motility. Overall these data suggest that UTR can be considered a prognostic marker in human prostate adenocarcinoma patients. 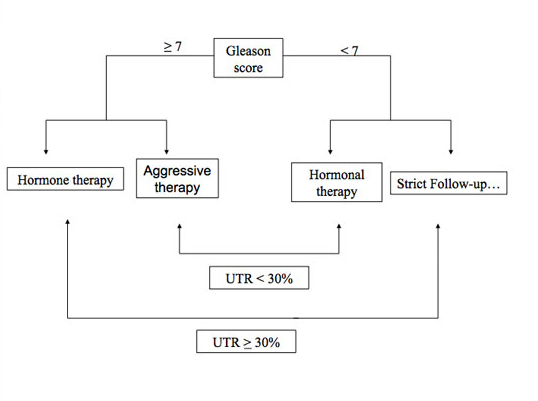 Flow chart legend
The clinical management of the patients could be influenced not only by the Gleason score of the tumours but also by the levels of UTR expression that can have the property to stratify the patients independently from the differentiation grade of their tumours.

Written by:
Michele Caraglia, MD, PhD as part of Beyond the Abstract on UroToday.com. This initiative offers a method of publishing for the professional urology community. Authors are given an opportunity to expand on the circumstances, limitations etc... of their research by referencing the published abstract.

Read other Beyond The Abstract submissions