This website uses cookies to ensure you get the best experience on our website. Privacy Policy
Active surveillance (AS) is increasingly accepted as the preferred initial management strategy for men diagnosed with low-risk prostate cancer. This approach balances the option to defer invasive intervention to preserve the quality of life with the ability to maintain a window for curative therapy should aggressive disease be later detected. How exactly to conduct the periodic follow-up of patients with known cancer remains unknown, particularly with regards to the type of follow-up biopsy, use of imaging, and imaging criteria.

Recently, multiparametric MRI (mpMRI) followed by MRI-US fusion targeted biopsy of those regions of interest has demonstrated potential in monitoring disease progression among patients on AS. However, there is no universally-accepted imaging criteria to define progression of disease, nor is it well understood how fusion biopsy should be used in the context of traditional systematic 12-core biopsy. Therefore, the goal of this study was to investigate the role of serial MRIs/US fusion targeted biopsy among men managed with AS and whether changes in mpMRI could adequately predict pathological disease progression on biopsy.

We identified 122 patients who had at least two serial mpMRIs and underwent MRI-US fusion biopsy, including 29 experienced pathological upgrade on follow-up biopsy. Of these, 38% were identified via systematic biopsy only, 38% were identified by fusion targeted biopsy only, and 24% were identified by both systematic and fusion targeted biopsies. We did not observe an association between changes in mpMRI findings such as doubling of index lesion volume or increase in number of regions of interest and subsequent pathologic upgrade. However, we did observe that PI-RADS score at baseline mpMRI and follow-up mpMRI predicts the presence of cancer in these patients (Figure 1). 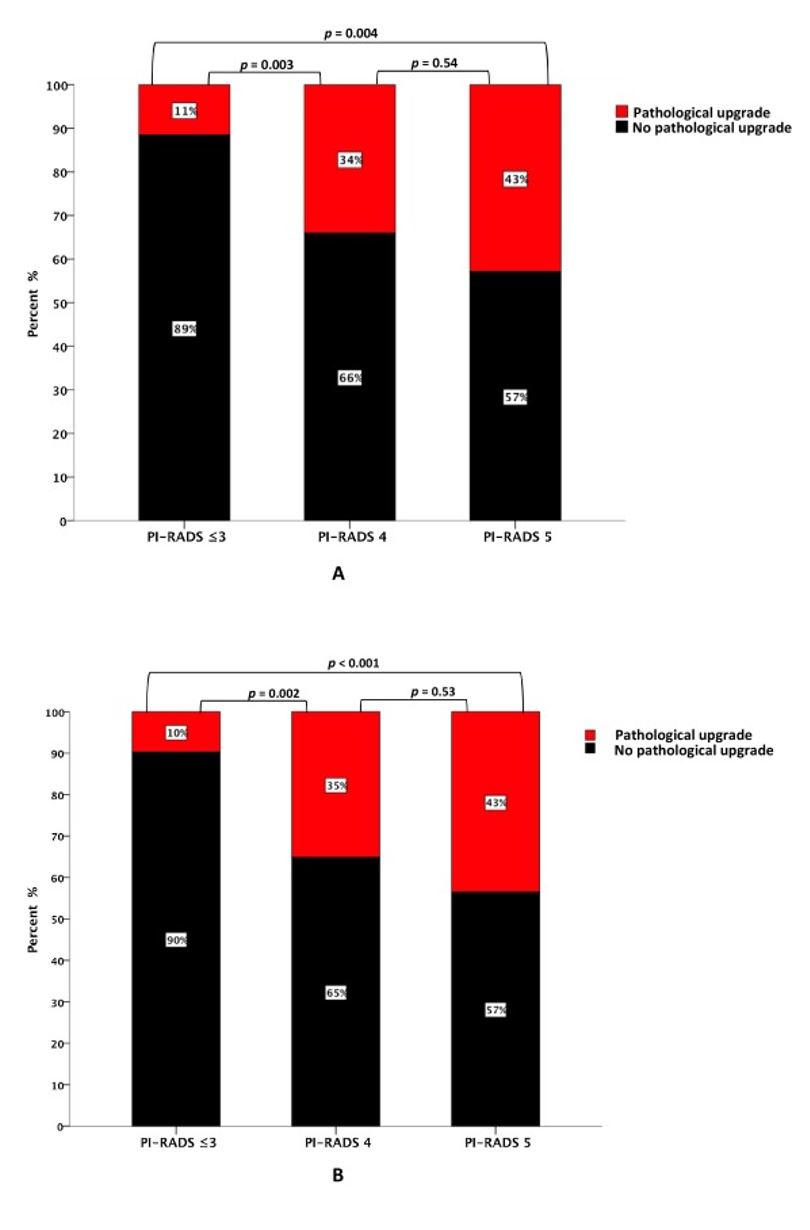 In this study, we did not directly compare the utility of fusion targeted biopsy versus systematic 12-core biopsy. Notably, the recent PRECISION study, a noninferiority trial that evaluated mpMRI and fusion targeted biopsy against standard transrectal ultrasonography-guided biopsy, demonstrated that mpMRI before biopsy and MRI-targeted biopsy was superior to standard biopsy in men who had not undergone biopsy previously.1 In distinction, we aimed to better characterize how mpMRI and subsequent fusion biopsy may be used in current AS management.

We did not identify a significant association between changes in mpMRI and pathologic upgrade. This may be a consequence of the relatively recent integration of MRI-US fusion biopsy, limiting opportunities for longer intervals of assessment. Furthermore, this observation might also relate to the ability of MRI-US fusion to identify and cull out larger lesions prior to enrollment in surveillance.

We also found that PI-RADS score was predictive of detection of higher-grade cancer, supporting the value of this system in an AS population. It should be noted that the PRECISION study specifically evaluated targeted biopsy in men who have never had a prior biopsy. However, in our study, a subsequent targeted biopsy of the same lesion one year later may not capture disease elsewhere in the prostate. Likely, there may be small lesions which do not meet size criteria on MRI for which targeted biopsies are not capturing. Therefore, systematic 12-core biopsies may be detecting these small volume upgrades that are not yet visible on mpMRI.

Ultimately, this study serves to demonstrate the clinical value of both systematic and fusion targeted biopsy to capture disease progression in the early surveillance period. The optimal timing of serial mpMRI and specific imaging characteristics for surveillance has yet to be elucidated. We hope to address these unanswered questions as our study population matures.