This website uses cookies to ensure you get the best experience on our website. Privacy Policy
DALLAS, TX USA (Press Release) - July 1, 2011 - Surgery and all its implications can be scary, especially so for pediatric patients and their parents who dread sometimes disfiguring scars. 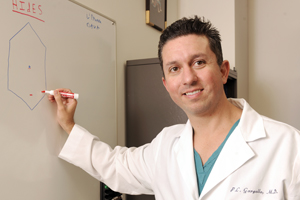 “Currently used incisions, even with minimally invasive surgery, leave the child with up to three scars that are visible any time the abdomen is exposed. The new technique of hidden incision endoscopic surgery (HIdES) eliminates visible scarring,” said Dr. Patricio Gargollo, assistant professor of urology at UT Southwestern and author of a study in a recent issue of the Journal of Urology.

He reports using the procedure for a dozen kidney surgery cases between April and July 2010 with no complications, but believes it has broader applications.

“I envision that this could be used for any upper abdominal procedure that needs to be done laparoscopically, and I currently perform all upper abdominal and some pelvic surgery with this technique,” said Dr. Gargollo, who is also director of pediatric urology minimally invasive and robotic surgery at Children’s Medical Center of Dallas.

HIdES was given the Best New Technique Award at the International Robotic Urology Symposium in 2010.

Minimally invasive techniques such as laparoscopy are often used in kidney surgeries. They leave much less scarring than open surgery, which requires a large incision across the patient’s abdomen. But laparoscopic surgery, in which a tiny camera inserted through a small incision acts as the surgeon’s “eyes,” still leaves noticeable scars, Dr. Gargollo said.

In addition to its cosmetic benefits, the HIdES technique offers surgeons greater technical flexibility than laparoscopic surgery because it uses multiple surgical ports for robotic-assisted surgical equipment and a camera. These ports are hidden below the bikini line, making them invisible if the patient is wearing a bathing suit.

Patients old enough to answer a survey, including older teenagers, and parents of younger children showed greater satisfaction with the HIdES incision scars than those generated by laparoscopic and open surgery, the study reported.