When surgical intervention is indicated for Peyronie’s disease, it is imperative to establish realistic expectations and to select the appropriate approach to help maximize outcomes including providing curvature correction, erections capable of sexual intercourse, and minimizing shortening.

Some experts have declined to offer grafting at all for fear of causing post-operative ED and others only recommend placement of an inflatable prosthesis to guarantee rigidity and curvature correction regardless of the patient’s erectile capacity. In this review of a large surgical experience, we employ a previously published surgical algorithm that prospectively placed patients into three groups: tunica albuginea plication, plaque excision and grafting, or inflatable penile prosthesis placement. We report our results in hopes of further defining outcomes, refining surgical approach, and helping establish realistic post-operative expectations (See Figure 1). Secondarily, we attempt to quantify pre-operative emotional distress and its effect on post-operative satisfaction, by employing two PD surveys. 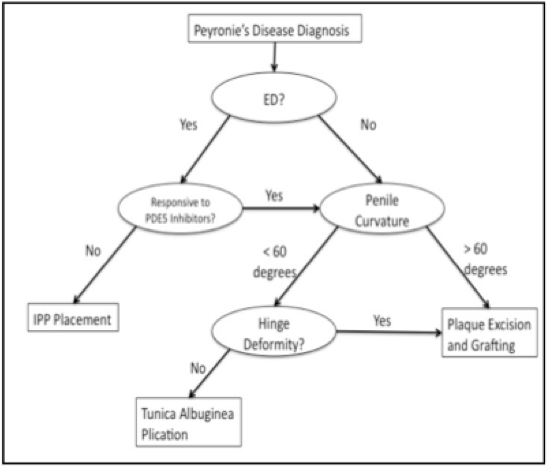 In all, 390 patients underwent penile straightening procedures for PD. The pre-operative survey results suggest that 80% of patients with PD experienced negative emotional effects from their disease, and 69% of men experienced a negative effect on their intimate relationships with similar levels of distress noted in all three groups. Post-operatively, there was no significant difference in penile rigidity, ability to engage in intercourse, or residual bothersome curve. In total, 70.1% of patients were satisfied with penile rigidity (excluding IPPs), 84.9% were satisfied with curvature correction, but up to 89% of patients were able to engage in penetrative sexual intercourse with or without PDE-5 inhibitors.

This study supports the use of our algorithm, in that there was no difference between the groups in post-operative penile rigidity, ability to have intercourse, or residual bothersome curve. By following the selection criteria, we feel that the great majority of men can engage in penetrative sexual intercourse with any of the three surgical approaches when properly selected based upon pre-operative erectile status and severity of deformity. Given the high prevalence of associated emotional and psychological distress, it is imperative to counsel patients that surgery aims to restore sexual functioning but will likely not fully restore pre-disease penile length, rigidity, or shape.