Almost 15% of the couples are infertile globally and the reason of approximately half of the cases is male factor. Common problems in male related infertility are sperm count, motility or structural abnormalities. One of the rare and severe causes of structural abnormality is globozoospermia.

This condition is detected in <0.1% of patients admitted for andrologic screening. The main characteristic defects of this syndrome are lack of acrosome and round-headed nucleus. Furthermore, any other morphologic defects such as deformed tails, abnormal perinuclear cytoskeleton, abnormally arranged mitochondria, vacuoles in nucleus, abnormally condensed nucleus, no postacrosomal sheath and disturbed midpiece may be accompanied.

The pathogenesis of globozoospermia syndrome is not yet clear. However, findings from recent studies suggest disturbance in spermiogenesis, which appears to be induced by a genetic disorder like homozygous deletion in DYP19L2, homozygous missense PICK1 mutation, or mutation in a testis specific gene such as SPATA 16. Spontaneous fertilization in case of total globozoospermic patient has not been reported in the literature. Because spermatozoa without acrosomes are not able to bind to the zona pellucida and fuse with the oocyte membrane. For this reason, many authors suggested that their infertility is overcomed by ICSI. In 1994, the first successful pregnancy in globozoospermic patient using ICSI was reported; however, most studies continued reporting very low fertilization rates for cases in which ICSI was performed on globozoospermic patients. It is suggested that assisted oocyte activation with Ca++ ionophore and electrical or mechanical stimulation might increase fertilization rates.

Our case report detailed the course of treatment and protocol of a patient with type 1 globozoospermia using ICSI and oocyte activation by calcium ionophore, which yielded conception and birth of a healthy baby after six previous unsuccessful attempts, using ICSI alone. The couple was admitted to us with a history of infertility for 17 years. Only one pregnancy had been obtained after five ICSI attempts, one of which resulted in an ectopic tubal pregnancy. During those 17 years, frozen embryos were not obtained because fertilization rate was very low in all ICSI attempts. At the time of initial consult, the female partner was 37 years old. Her physical examination was unremarkable. The male partner’s medical and physical history, which included a urogenital exam was unremarkable. However, total globozoospermia was present in several semen analyses. All of the morphologically assessed spermatozoa had a round head with a wide, long, and irregular neck in phase contrast image (Figure 1). Transmission electron microscopic (TEM) imaging revealed the lack of acrosome, presence of vacuolization in the nucleus, abnormal structure of microtubule, and abnormalities in chromatin condensation with aniline blue staining. Only 82% of the total number of spermatozoa had normal chromatin condensation. Serum hormone levels were as follows: FSH, 6.2 IU/l; LH, 3.5 IU/l; total testosterone, 9.1 ng/ml; inhibin-B, 125 ng/ml. He had normal chromosomal constitution of 46 XY, without a microdeletion of the Y chromosome. ICSI followed by oocyte activation with Ca++ ionophore was offered to the couple.

Following classic long down-regulation priming, which included recombinant FSH and human menopausal gonadotrophins (hMG) injections, the procedure started at a dose of 225 IU/day and 150 IU/day on cycle day 3, respectively. Thirteen metaphase two stage oocytes were collected. On the day of oocyte collection, sperm concentration was 11×106/ml with 25% progressive motility. By using an Olympus IX 71 Inverted Research Microscope (Olympus Corporation, Shibuyaku, Tokyo, Japan), only the spermatozoa having linear, progressive motility, normal structure of the neck, and lacking nuclear vacuoles for ICSI were selected. Following ICSI, oocytes were treated with Ca++ ionophore 7 μl/ml which was extracted from a prepared solution of 10 μl Ca++ ionophore (A23187, Sigma-Aldrich, Istanbul, Turkey) and 1 ml G-IVF (Vitrolife, Istanbul, Turkey) solutions with different durations in compliance with our laboratory protocol. Exposure times with Ca++ ionophore were as follows: 4 oocytes for 7 min, and 5 oocytes for 14 min. In addition, 4 oocytes were not exposed. After exposure to Ca++ ionophore, the oocytes were washed three times with G-IVF (Vitrolife, Istanbul, Turkey) medium and cultured in the same medium at 36.7oC, 5% oxygen, and 6% CO2 concentration. Two oocytes were observed to have 2 PN after being treated with Ca++ ionophore for 7 min as the three oocytes which were treated with Ca++ ionophore for 14 min. Moreover, 2PN was not observed in the four oocytes which had not been treated with Ca++ ionophore. On day 5, two obtained embryos after 14 min of treatment with Ca++ ionophore were implanted under ultrasound guidance. Three obtained blastocysts after 7 min and 14 min were frozen using vitrification technique. Vitrolife GIII series (Istanbul, Turkey) media were used in all steps. Two weeks after the oocyte collection, the serum beta hCG level was 101 IU/l. Clinical pregnancy with a heartbeat was confirmed after two additional weeks. The pregnancy concluded with the live birth delivery of a single, healthy male: 3720 g, 52 cm at delivery.

Globozoospermia, an infrequent type of teratozoospermia, has several genetic causes. Discrepancies in fertilization rates and sperm DNA abnormalities may be revealed by further studies of the genetic causes of globozoospermia. Globozoospermia has usually low fertilization and pregnancy rate. The majority of authors use assisted oocyte activation with Ca++ ionophore to solve this issue in ICSI cycles. Also, in this difficult case was obtained a successful and healthy childbirth in ICSI with assisted oocyte activation with Ca++ ionophore.    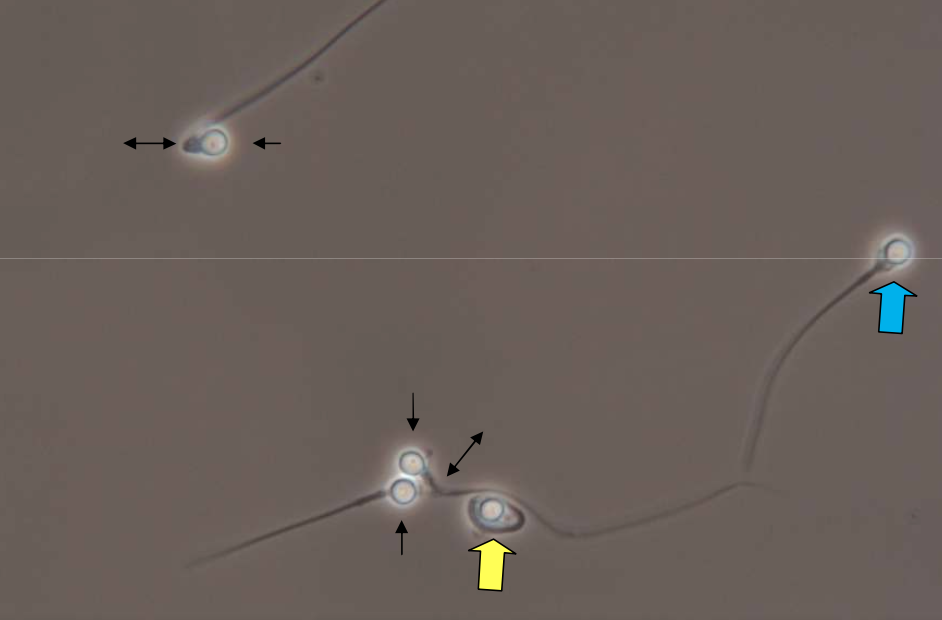 Figure legend: Photomicrographs of the sample with phase contrast microscopy, in which spermatozoa with a round head (arrow), wide (blue arrow) and broken neck (double arrow) are observed. Also it is include that spermatozoa with dag defect (yellow arrow).