Urologists devoted to the area of sexual dysfunctions are used to saying that what we treat represents just the tip of the iceberg of the bulk of the men affected with andrological conditions; consequently, the question arises on how to effectively tackle such problem. Several strategies have been developed over the years, among the others: scientific Societies have devised awareness campaigns with free andrological consultations,1 and educational stages have been offered to general practitioners, diabetologists, cardiologists, pharmacists. With a marginal impact, overall.

Surprisingly, minimal attention has been given by the scientific community to what lay people know of male sexual dysfunctions: specific scientific reports are in fact lacking. This is a potential significant bias when planning actions aimed to promote male sexual health and better access to effective treatments, as we feel it should be known upfront what people know and what do not know, what people expect, fear, wish, in order to target at best specific interventions. Our study addressed this issue: it explored the knowledge of some key aspects of male sexual dysfunctions in a selected population sample, expected to have a knowledge of andrologic problems not inferior to the average general population, being professionals working in the health care area, a very minor part only represented by physicians. We developed an ad hoc questionnaire in two versions, one for each sex, investigating key areas of male sexual and reproductive issues. This paper focuses on the subject’s knowledge of frequency, causes, consequences and treatment modalities/reimbursement for erectile dysfunctions (ED), and attitudes toward penile prosthesis surgery in case of severe ED.

More than 1000 between men and women answered the questionnaire, providing for the first time a view on what a large sample of people think of male sexual dysfunctions and related treatments. The outcomes of our survey show that also in this more-than-average knowledgeable sample there are misconceptions both on the prevalence of organic factors in the etiology of ED and on the implications of ED on ischemic heart disease. When enquiring about the knowledge of available treatments for ED it emerged a scanty awareness of second level treatments. Nonetheless, when confronted also with the most aggressive treatment, i.e. penile prosthesis, the majority of both genders responders would elect to undergo/support this surgery, should it be the only way to solve the erectile problem (see table). 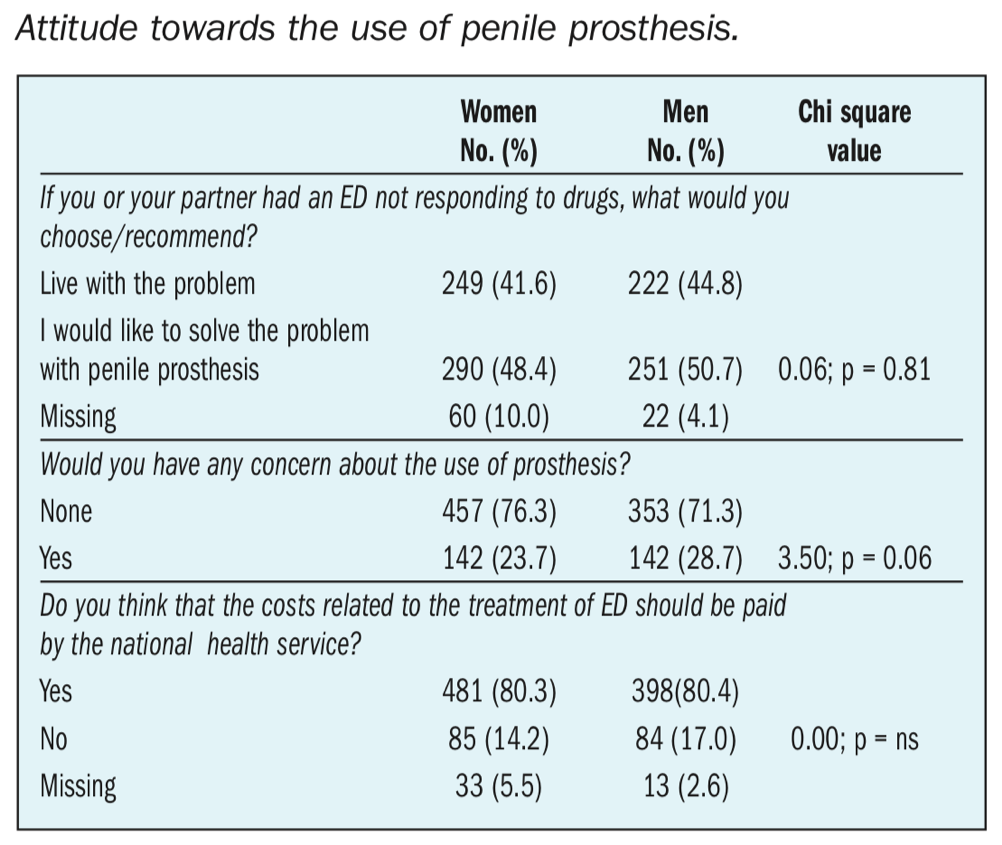 Interestingly, the penile prosthesis option is conceptually accepted by half of the sample of both men and women. Furthermore, a sharp majority of the sample would not foresee any problem/resistance in having intercourse by means of the penile prosthesis. In this perspective, the population appears ready and overall keen to this treatment option, too often not addressed by the majority of the medical community not dedicated to penile surgery despite its key role in treating severe ED cases as those resulting from radical prostatectomy, diabetes, Peyronie’s disease.2 Of note, the vast majority of our sample, that we assume largely not affected/involved in sexual dysfunctions, considered that coverage for ED treatment should be provided by the National Health System; this suggests that ED is considered as a significant condition that deserves treatment and that therapies for ED are not perceived as lifestyle issues.

Overall, we feel that our findings underscore the need of educational programs aimed to promote population awareness on both: the real ED risk factors and their tight correlation with cardiovascular conditions, and all available treatment options.