BERKELEY, CA (UroToday.com) - As far back as 1940, testosterone (T) therapy in men with T deficiency (TD), when administered in the physiological range, was deemed beneficial to overall health and had no demonstrable side effects.1, 2 These early observations pointed out that if T treatment was in the physiological range, no harm of T therapy was noted.1, 2 Over the past seven decades a large number of studies were published on T therapy in men with TD. While some of these studies had small numbers of patients, or were of short duration, and others may have been observational in nature, many of these studies have provided a wealth of information on the improvements in the overall health of men with TD. 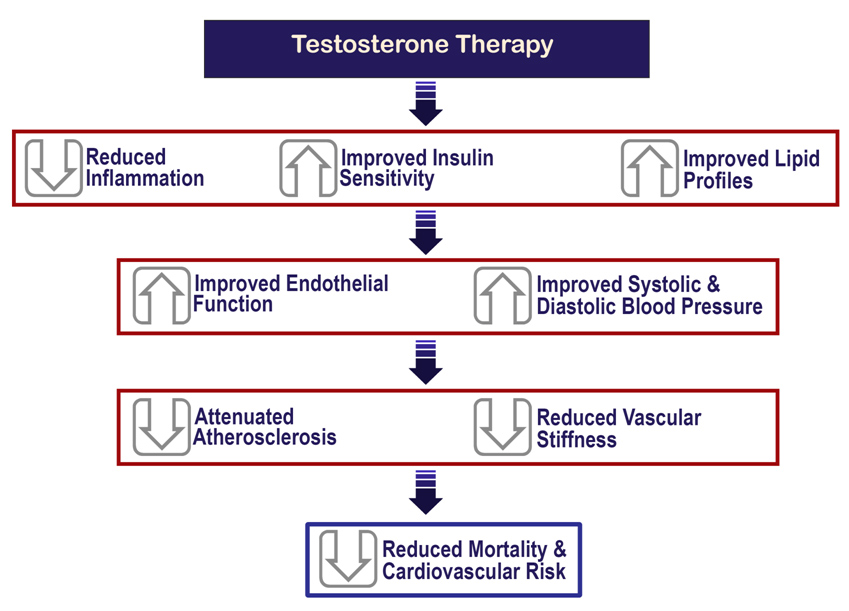 Beneficial Effects of Testosterone Therapy in Men with TD

T therapy in men with TD produced significant decrease in weight, WC, and BMI,3-6 suggesting that T therapy produces improvement in metabolic function and results in lifestyle and behavioral modifications, such as increased energy and motivation and increased physical activity that are translated into changes in body composition, which are accompanied with increases in lean body mass and reduction in fat mass, as discussed previously.3-6 Reduced fat mass and increased lean body mass are the most common reported observations in men with TD treated with T.3-6, 20, 24, 25-43

Long-term T therapy in men with TD is associated with reduced levels of total cholesterol (TC), low-density lipoprotein (LDL), and triglycerides (TGs) coupled with beneficial increase in high-density lipoprotein (HDL).3, 7, 8, 13, 14, 20, 24, 44-53 Thus, T therapy appears to have a favorable impact on the lipid profile in men with TD. Treatment with intramuscular T undecanoate maintained LDL levels low and HDL levels high in men with TD for up to 9.5 years.44 The clinical implication of reduction in LDL and TGs and increased HDL is reduced CVD risk.3-8

Although epidemiological studies have suggested that reduced T levels are associated with greater CVD risk,58 this area of investigation remained controversial.59 Hoyos et al.10 reported that T treatment decreased arterial stiffness and decreased the respiratory quotient compared with placebo. T therapy in men with TD reduced CVD risk factors with concomitant improvement in insulin sensitivity and glycemic control, even in studies of shorter duration.60, 61 Further, a marked decrease in visceral fat mass and circulating inflammatory cytokines concomitant with improvement in endothelial cell function have been reported.48, 62 T is well known to regulate a host of metabolic functions in liver, adipose tissue, muscles, coronary arteries, and the heart. Thus, it is not surprising that T therapy reduces the risk of CVD. An inverse relationship exists between T and obesity and TD is associated with dyslipidaemia, atherosclerosis, cardiovascular diseases, metabolic syndrome (MetS) and diabetes.63, 64, 65

Two recent studies demonstrated reduced mortality in men with TD who were treated with T.66, 67 Shores et al.66 demonstrated that mortality in T-treated men was 10.3% compared with 20.7% in untreated men (P < 0.0001). Muraleedharan et al.67 demonstrated increased mortality of 19.2% versus 9.0% in men with normal T and in men with low T receiving T therapy, mortality was reduced to 8.4%, compared with 19.2% in untreated men (P=0.002). These findings are consistent with several studies.34, 58, 68-87 CV benefits of T therapy have been shown in interventional studies, including benefits of in men with congestive heart failure (CHF), cardiac ischemia/angina, and reduced carotid intima media thickness (CIMT).59, 60, 61, 87-99 Most studies identified an inverse association between serum T concentration and all-cause or cardiovascular mortality.

T therapy in men with TD increases vigor and vitality.21 This, together with improvement in quality of life, explains, in part, the noted increase in physical activity subsequent to T treatment. Furthermore, the increased motivation, level of energy, and vigor associated with T treatment may explain the marked reduction in BW attributed to increased energy expenditure. Similar observations were made by Tong et al.,100 who examined the effect of long-acting T undecanoate therapy on quality of life in men with TD. After 48 weeks, the QoL of men treated with T improved significantly in five out of the eight domains on SF-12. The mental health composite scores also improved in the T group. After adjusting for baseline differences, significant improvement was observed only in mental health composite scores. Erectile dysfunction (ED) is thought to be one of the relevant signs and symptoms of TD deficiency. The role of T in erectile physiology has been the subject of a recent comprehensive review and it is clear that androgens play critical role in erections.101 The readers are advised to consult this review.101 For brevity’s sake, we will not elaborate on the relationship between erectile dysfunction and TD, since this topic is covered in detail in this current review.101

Written by:
Abdulmaged M. Traish, PhD, MBA as part of Beyond the Abstract on UroToday.com. This initiative offers a method of publishing for the professional urology community. Authors are given an opportunity to expand on the circumstances, limitations etc... of their research by referencing the published abstract.