This website uses cookies to ensure you get the best experience on our website. Privacy Policy
Abu Dhabi, United Arab Emirates (UAE) (UroToday.com) Dr. Matthew Gettman concluded the “New Technology” Plenary Session this morning at the World Congress of Endourology (WCE) with a presentation discussing advancements in magnetic instrumentation in the field of laparoscopic minimally invasive surgery. He mentioned that there are a number of opportunities (or areas of improvement) currently in the field of minimally invasive surgery, including ergonomics (movements and instrumentation angles), efficiency, patient needs (pain and cosmesis), and dedicated ports designed to assist with operations and retract excised tissue.

Dr. Gettman believes that there is a current trend in endourology that is favoring single port over conventional multi-port minimally invasive robotics. However, there are several unanswered questions with single-port and reduced port surgeries that he was quick to discuss. The first question that arises when discussing single-port feasibility is how cases can be performed with the fewest possible number of incisions. He discusses that in the industry’s quest to reduce patient incisions, will other advantages and benefits that come with multi-port surgical procedures be lost? He also begs the question of how urologists and industry leaders can go about addressing the need for assistant ports and, specifically, how retraction can be optimized in such a way that additional ports are not introduced into the practice of conventional minimally invasive surgery. 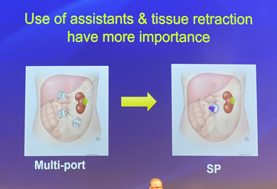 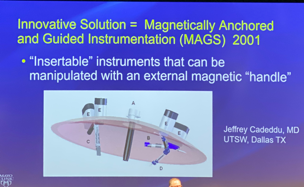 Since this initial study, MAGS has gained traction and has evolved to be introduced in procedures, such as reduced port laparoscopic nephrectomy and NOTES nephrectomy. MAGS, in large part, is based on a platform that champions innovative tools such as a retractor, camera, and cautery dissector that are all operated using a collapsible instrument design. 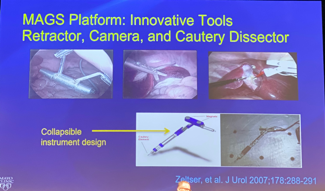 In the year 2019, magnetic instrumentation has made significant improvements to its applications in minimally invasive surgery from the time of its initial introduction at the start of the century. Updated series focusing on magnetic-assisted robotic surgery with reduced port reverse address resolution protocol (RARP) have shown impressive advancements in this technology. Steinberg et al. 2019 out of the University of Texas, Southwestern, demonstrated the ability to eliminate the fourth arm during robotic surgery and higher effectiveness of magnet retractors, all the while showing no intraoperative or postoperative complications for patients. Similarly, Diaz et al. 2019 verified these results at the American Urological Association conference last year.

In summary, the role of magnetics in minimally invasive surgery currently demonstrates the ability to perform tissue resection, success in reducing the number of trocar sites, and adjunct for reduced port and single-port laparoscopy. However, there still remains much work to be done to further prove the extent of its benefits in MIS, such as investigating patient-related benefits (pain and cosmesis) and cost.