Abu Dhabi, United Arab Emirates (UroToday.com) Dr. Jens Rassweiler replaced Dr. Ali Serdar Goezen for this presentation as Dr. Goezen was not able to make the World Congress of Endourology this year. Dr. Rassweiler spoke about advancements that are being made in imaging modalities in the field of ureteroscopy, laparoscopy, and minimally invasive robotic surgery.

One of the major limitations in modern-day laparoscopy surgery and visualization is that surgeons are forced to operate on three-dimensional anatomical structures while viewing two-dimensional representations of the surgical field. Aside from the severe hindrance in surgical ease that comes with operating using a two-dimensional representation of a three-dimensional space, several other issues are present in modern laparoscopy, including four degrees of freedom, absence of shadows, stereovision, and movement parallax, impaired hand-eye coordination, and associated mental stress.

Dr. Rassweiler mentioned that one solution to help resolve the issue of viewing a two-dimensional representation of a three-dimensional space on a monitor during surgical intervention is by introducing an active shutter to laparoscopic camera, an innovation that is not currently used in endoscopy. An active shutter would allow for one image to be shown at all times while quickly switching between right and left images on a screen (this switch would be so fast that changes are not visible or noticeable to the human brain). However, a major problem that faces the introduction of the active shutter is that it requires a special set of glasses that are heavy, rather costly, and operate with a high energy expenditure. In addition, there is a high amount of stress that these glasses would cause to the brain, as past studies have shown that surgeons who have utilized these glasses have complained of headaches. 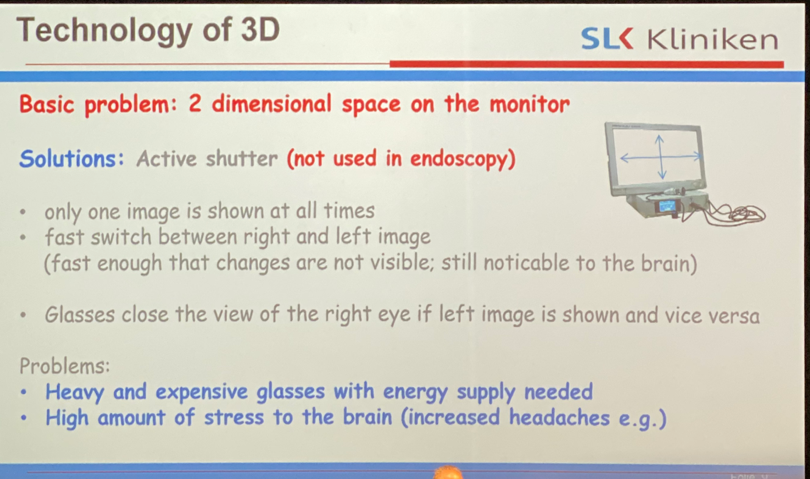 Another potential solution to help advance 3D technology in surgical practice is the introduction of passive polarization, which, unlike the active shutter, is currently used in endoscopy. Passive polarization would allow for 2 panels in the monitor located behind one another and rely on special glasses that only let an image intended for a respective eye pass through a polarization filter. As such, both images would be made available simultaneously but only certain images will reach a respective eye. Dr. Rassweiler explained that this technology has a number of advantages, including the utilization of lightweight glasses that do not rely on an energy supply, lower costs associated with these polarized glasses, and much less stress compared to active shutters, albeit with a darker image. 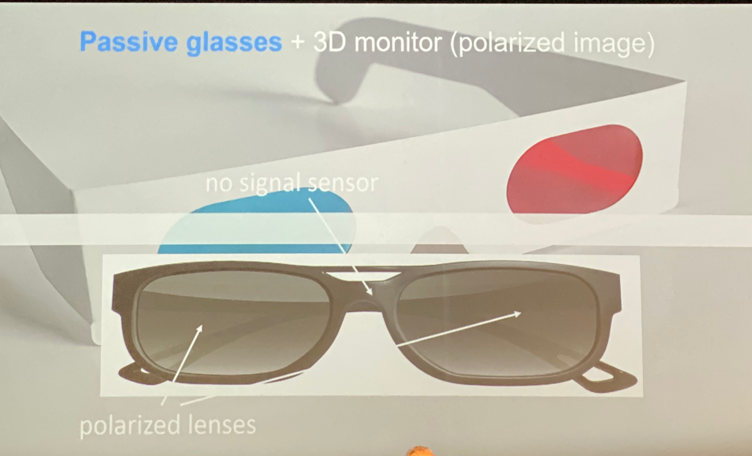 The latest advancements in three-dimensional imaging systems have come in the form of dual channel steroendoscopes, passive polarizing stereoscopic projection, and the ability to generate high quality 3D images during surgery, according to Dr. Rassweiler. Technological devices, such as the Da Vinci surgical robot, have already begun to incorporate stereoscopic vision in visualizing the operating field, thereby eliminating the need for shutter glasses while providing a more comfortable 3D view for surgeons and operating room staff. Furthermore, Dr. Rassweiler alluded to further technological advancements that are on the horizon that will even further improve 3D visualization, such as the deflectable Endoeye Flex 3D, holding Aesculap Einstein Vision, and Wolf Epic 3-chip camera.

In conclusion, Dr. Rassweiler is hopeful that major improvements to three-dimensional surgical imaging are on the horizon in the field of endourology. He believes that their will be major improvements to anatomical orientation and dissection that will come with these advancements, along with new surgical strategies and less expensive surgical options.