This website uses cookies to ensure you get the best experience on our website. Privacy Policy
Abu Dhabi, United Arab Emirates (UroToday.com) It is widely known that bladder cancer is the second most common urological cancer in adults and the seventh most common diagnosis of cancer in males. One of the most conventional methods of treating bladder cancers is with Transurethral Resection of the Bladder Tumor (or TURBT), which aims to surgical remove a bladder tumor from the bladder wall. Unfortunately, there are several morphological difficulties and complications that accompany standard TURBT treatment, often leading to eventual recurrence (in roughly 60-70% of cases) of the cancer such as detrusor muscle presence (30-60%), inability to accurately separate the tumor leading to lamina propria damage, potential tumor seeding, or incomplete resection.

Thulium fiber laser (TFL) technology is has been emerging onto the urological scene in recent years as a new laser modality in prostate ablation. Compared to the traditional Holmium fiber laser (Ho:YAG), the primary advantages of the TFL is its ability to deliver a high energy output from a relatively small fiber core. Thulium fiber lasers operate at wavelengths of 1,908 nm and 1,940 nm, two wavelengths that match more closely with water’s optimal absorption peak as opposed to Holmium lasers that operate at infrared wavelengths exceeding 2,000 nm. This allows for much more precise resections of cancer. Dr. Alim Dymov and his group looked at this laser and its utilization for en bloc resection of non-muscle invasive bladder cancer (NMIBC). What was particularly impressive about the en bloc resection technique was that Dr. Dymov and his team were able to show its high efficacy in cases with difficult tumor locations and abnormal anatomies, such as in cases of bladder dome tumors, tumors located in close proximity to the ureteral orifice, and tumors that cover the ureteral orifice.

His current clinical and laboratory studies focus primarily on improving the morphological diagnostic criteria for NMIBC and comparing the quality of specimen after thulium fiber laser resection and conventional transurethral resection of bladder tumor (cTURBT) methods. 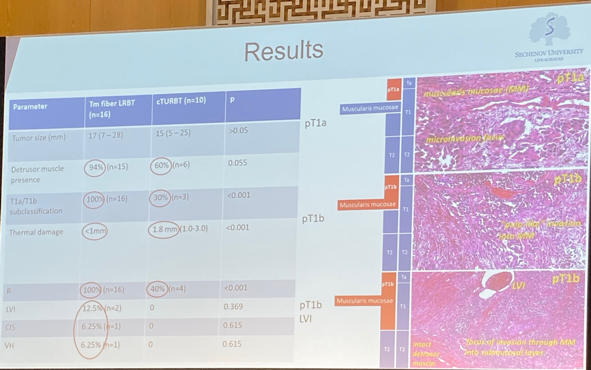 Dr. Dymov’s results demonstrated that the en bloc resection method was able to minimize coagulation of the tumor base and urothelium along resection margins and completely negate any tumor mass coagulation. In addition, Dr. Dymov stressed when all layers are preserved from an intact specimen, this saves the differentiation from the tumor and its base. Overall, Dr. Dymov’s studies with en bloc resection of bladder tumors with a TFL showed a more precise and enhanced means of evaluating lamina propria and muscularis propria invasion for non-muscle invasive bladder cancers. This finding is extremely important as it may allow for choosing a more correct treatment strategy for bladder cancer diagnoses in the future.