Dr. Coleman went on to elaborate on the distinguishing biologic features of UTUC. UTUC is predominantly high-grade at presentation (65% versus 40% in bladder cancer) and variant subtypes are rare in this disease (6.5% versus 20% in bladder cancer). There are also known causative factors that predominate for UTUC:

While genomic studies may provide insight into biologic differences, the caveat remains that UTUC studies are dependent on retrospective, small cohort, institutional databases with rare outcomes and potential biases, whereas as bladder cancer studies are based on large genomic databases such as the TCGA. Case selection with UTUC studies is a key element to consider as concomitant or metachronous cancers act as confounders and cross contamination between upper and lower tracts remains a concern. Thus, Dr. Coleman believes that an adequate comparison requires patients with no prior history of concomitant or metachronous crossover disease. 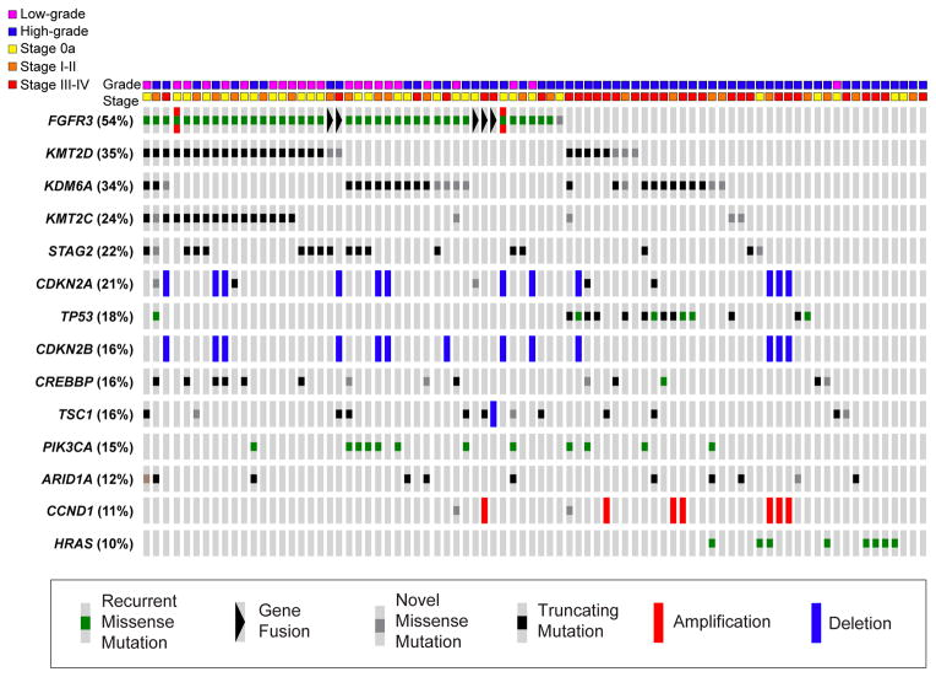 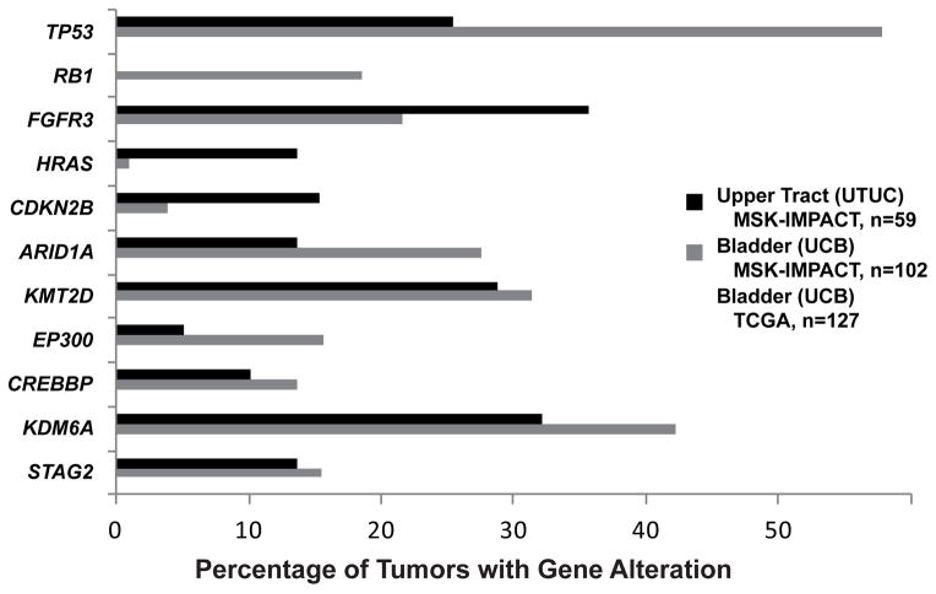 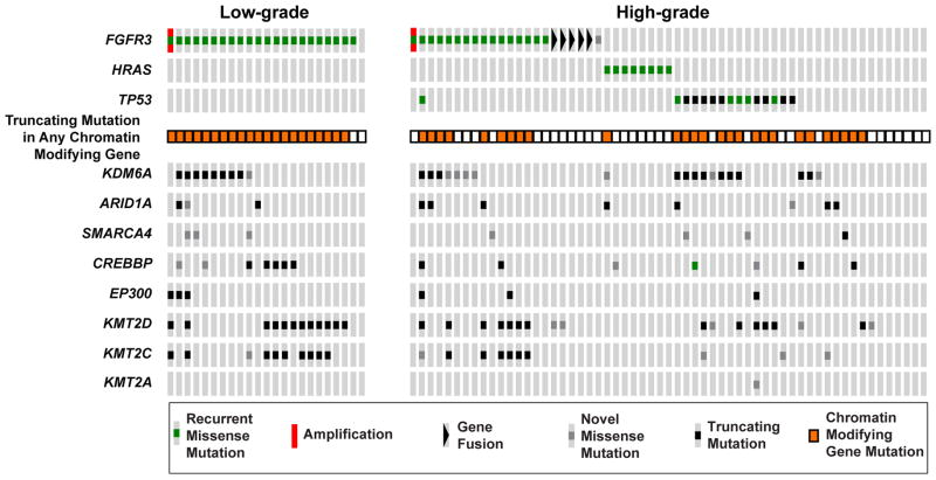 FGFR3 and TP53 have subsequently been used as genomic biomarker scores and were correlated with pathology features as demonstrated in the images below, with FGFR3- patients having more favorable pathologic features compared to TP53/MDM2- patients and superior recurrence free and cancer-specific survivals. 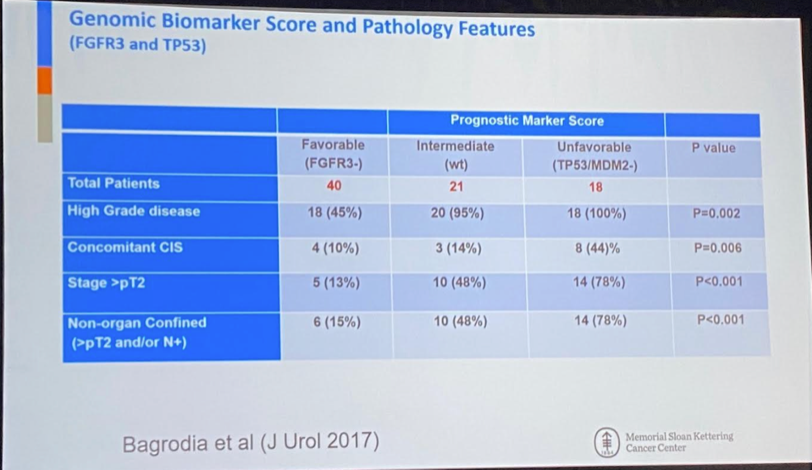 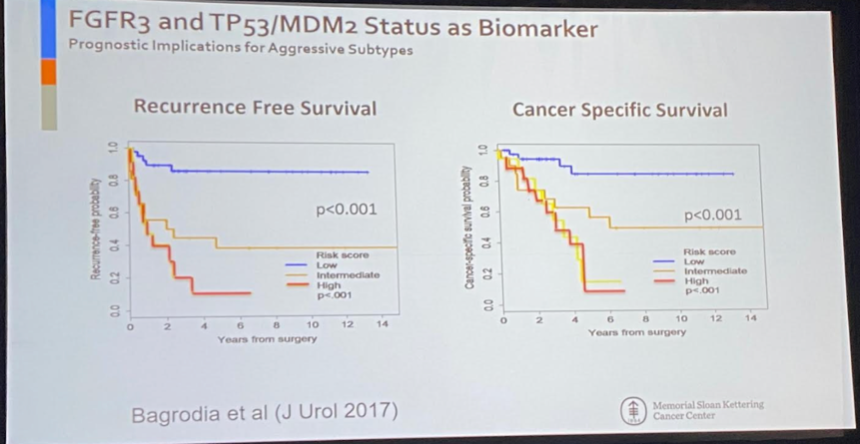 The Drop Down hypothesis was evaluated in a cohort of 195 patients, 29 of whom had UTUC with subsequent bladder cancer. The median time to recurrence in the study was 7.3 months. FGFR3, KDM6A, and CCND1 were associated with bladder recurrence (HR~3), whereas TP53 had a lower risk (HR=0.32). Notably, all UTUC and bladder cancer cases were clonal with bladder tumors reflecting UTUC genetically.3 UTUC is characterized by a high mutational burden and high microsatellite instability is seen mainly in Lynch Syndrome-associated cancers. There remain putative mechanisms involving DNA Damage Response (DDR) genes.

In the MIBC disease space, ERCC2 and DDR mutations have been shown to be favorable prognostic factors for OS in MIBC patients treated  with platinum-based chemotherapy regimens. Similarly, the TCGA bladder cancer transcriptional subtypes has been used to guide treatment strategies. The challenge thus becomes to identify similar prognostic markers in the UTUC space. 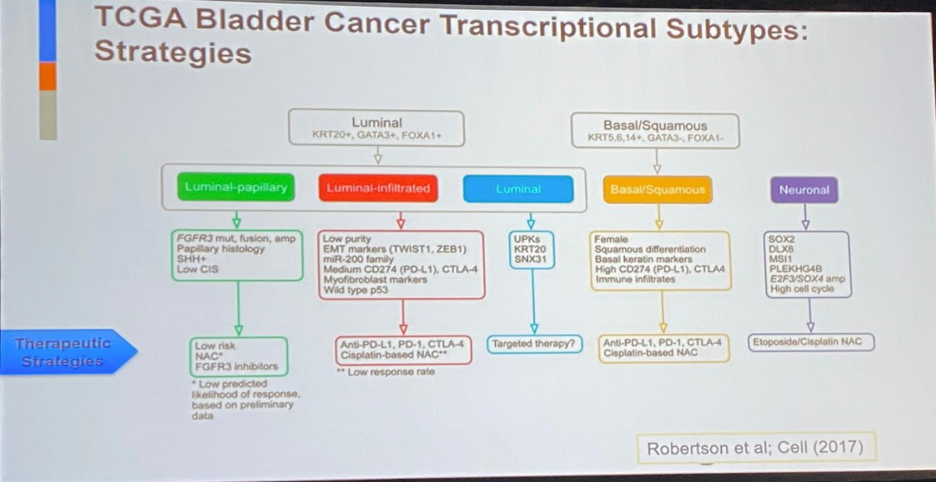 Robinson et al. performed a multicenter integrated analysis of whole-exome and RNA sequencing of 37 UTUC cases4 and demonstrated that:

Five anatomic variations in UTUC genetic profiles have been identified, ranked here from most favorable (hypermutated) to least favorable (triple negative) with regards to disease-specific survival.

Dr. Coleman summarized his talk with the following important points: