Dr. Dreicer began his talk by giving a case presentation of one of his former patients from 1989.  This was a 44-year-old farmer who presented with worsening abdominal pain and gross hematuria, subsequently found to have a 16 cm right renal mass without evidence of metastasis, Hgb 7.8. Chest imaging was negative, and the patient subsequently underwent an open radical nephrectomy with final pathology demonstrating high-grade clear cell renal cell carcinoma (RCC). This patient was referred to Dr. Dreicer 3.5 months post-operatively for consideration of adjuvant treatment given his high risk of disease recurrence. Unfortunately, at that time, there were no adjuvant treatment options for that patient.

With regards to RCC:

Adjuvant trials of tyrosine kinase inhibitors (TKIs): ASSURE, PROTECT, and ATLAS were all negative trials. S-TRAC, a randomized, double-blind, phase 3 trial of 615 patients with locoregional, high-risk clear cell RCC randomized to receive either sunitinib 50 mg every day or placebo on a 4-weeks-on, 2-weeks-off schedule for one year or until disease recurrence demonstrated a disease-free survival (DFS) benefit from 5.6 years in the placebo arm to 6.8 years in the sunitinib arm (HR 0.76, p=0.03). Notably, the ASSURE trial, which also included sunitinib, was a negative trial. The adverse event profile of sunitinib in both trials was ~60% with many patients averse to taking this medication in the metastatic setting, let alone the adjuvant setting.1,2

Does this data translate to the metastatic, no evidence of residual disease (M1NED) space? Multiple retrospective series have reported a benefit compared to alternative management from the pre-immunotherapy era. A randomized phase three trial of one year “adjuvant” pazopanib versus surveillance following metastasectomy paradoxically demonstrated a superior OS in the placebo arm (HR 2.65), clearly proving the futility of this approach.3

This brings us to the KEYNOTE-564 trial that evaluated adjuvant pembrolizumab after nephrectomy in RCC patients. The key eligibility criteria and study design/objectives are illustrated in the image below. Patients were risk-stratified into intermediate-high (86% of total), high (8%), and M1NED risk (6%) subgroups. 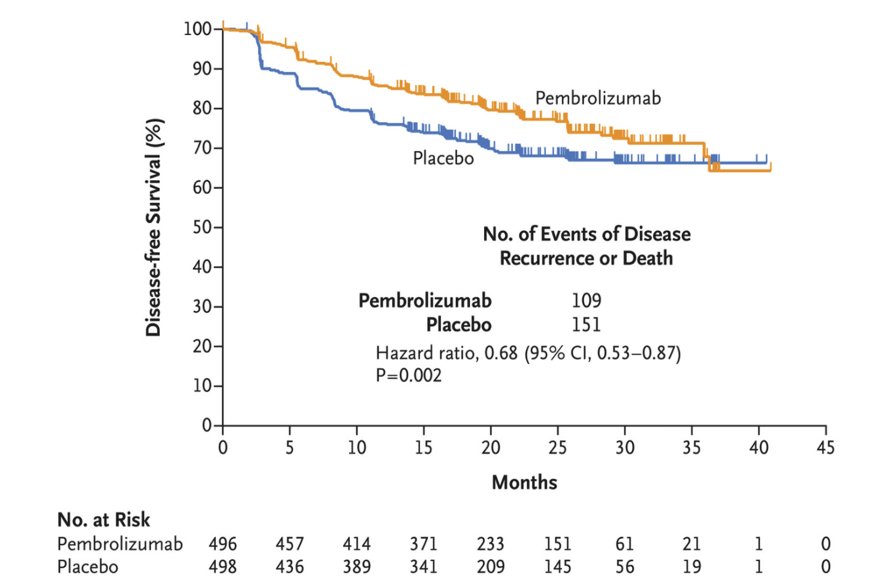 DFS at 24 months was 77% in the pembrolizumab arm compared to 68% in the placebo arm. Twenty percent of patients receiving pembrolizumab had serious adverse reactions with two therapy-related deaths. The discontinuation rate secondary to toxicity (elevated liver function tests, colitis, adrenal insufficiency) was 21%. Twenty-six percent of patients had dose interruptions. As has been previously documented, the FDA granted approval for this drug on November 17, 2021.

What were the strengths and limitations of this study, per Dr. Drecier?

Dr. Dreicer went on to elaborate on the need for markers to predict response to adjuvant therapy with RCC. He drew parallels from the muscle-invasive bladder cancer disease space, whereby although the CheckMate-274 trial demonstrated an OS benefit for adjuvant nivolumab,4 the IMvigor010 trial of adjuvant atezolizumab did not meet its primary endpoint of DFS in the intention to treat population.5 Post-hoc analysis using circulating tumor DNA (cTDNA) however demonstrated that ctDNA positive patients had improved DFS and OS with atezolizumab, clearly discerning a subset of patients to target despite the overall negative results.6 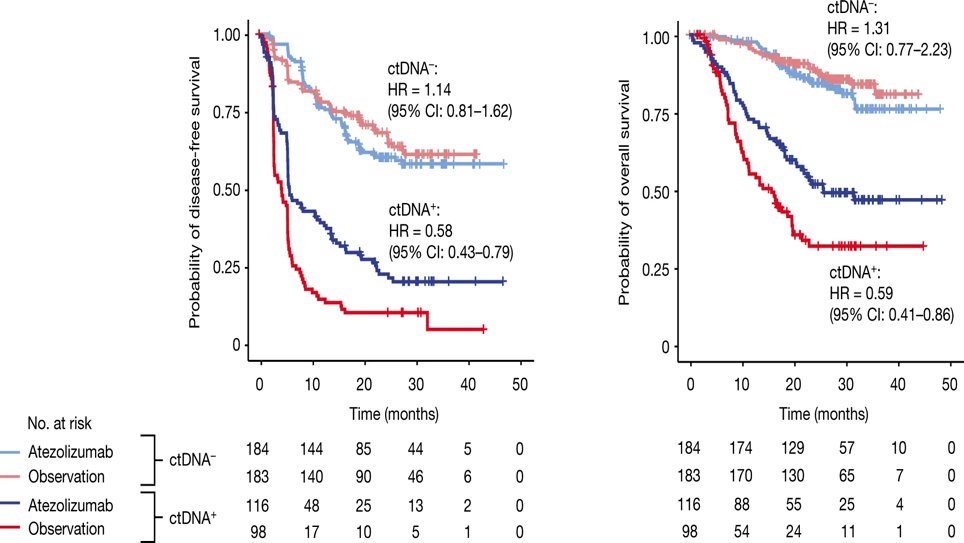 What is the value of ctDNA in RCC?

Dr. Dreicer concluded his talk with the following take-home messages: