(UroToday.com) At the Society of Urologic Oncology (SUO) Annual Meeting, Dr. James Wysock gave an update on the imaging for primary prostate cancer. Dr. Wysock briefly touched on imaging strategies in both the screening and diagnosis of localized prostate cancer.

The poor sensitivity and specificity in the screening and diagnosis of men with prostate cancer is a well-known limitation of our current technologies. Prostate-specific antigen (PSA) directed screening and transrectal ultrasound (TRUS) guided biopsies lead to both the under-sampling of clinically significant prostate cancer as well as the overdetection of indolent prostate cancer. As a result, there has been increasing interest in the use of MRI and MRI targeted biopsies to aid in this diagnostic gap. Dr. Wysock presents data from Kim et al. demonstrating the rapidly increased use of prostate MRI in recent years reflecting this growing reliance on MRI-guided biopsies (Figure 1). 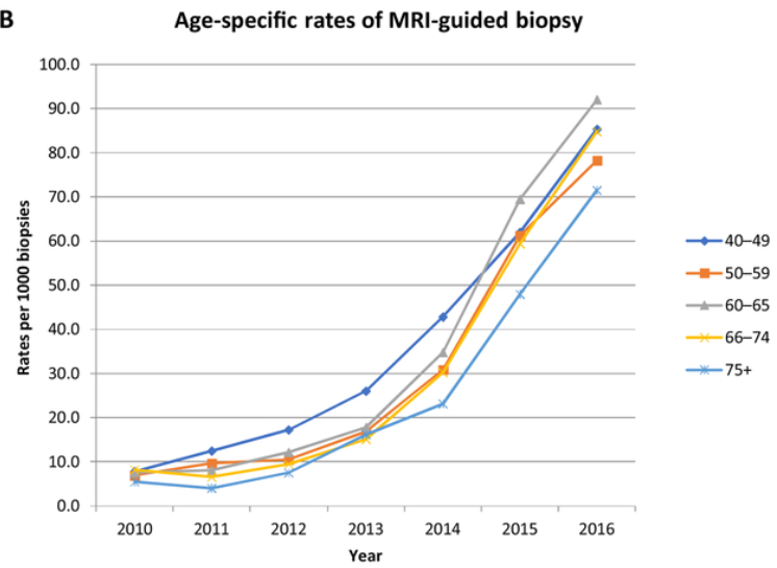 Dr. Wysock briefly discusses the role of MRI as a potential screening tool for prostate cancer, purposing MRI may function in the future similar to mammography for breast cancer or low-dose CT scan lung cancer, two cancer which screening programs rely heavily on imaging modalities. Additionally, 29Mhz high-resolution micro-ultrasound is an emerging technology that may play a role in the screening and detection of clinically significant prostate cancer in the future, although these data are still immature.