This website uses cookies to ensure you get the best experience on our website. Privacy Policy
Scottsdale, Arizona (UroToday.com) This was a chart analysis using EMR for patients across all three Mayo Clinic sites to characterize women that have been seen for urethral diverticula, a complex problem for the female pelvic surgeon, who had International Classification of Diseases codes corresponding to urethral diverticulum (ICD-9 code:599.2; ICD-10 code: N36.1). In addition, a search was performed for those patients that underwent urethral diverticulectomy via CPT code (53235). Data were available for patients that were seen within the Mayo Clinic system from June 1st, 2003, through October 5th, 2018. Patients were classified by age, etiology, presenting symptomatology, location, treatment, pathology, and postoperative outcomes.

There were 447 women who met the initial coding search criteria for urethral diverticula. Of these, 228 women had documented urethral diverticula. The most common presenting complaint in these women were irritative voiding symptoms (93) and infections (92). The most common diagnostic modality was radiographic imaging (198/228) with MRI accounting for 157 cases. The etiology was unknown in the majority of cases (181/228). Of the women that were diagnosed,172 went on to have urethral diverticulectomy. Fifty-one patients had concurrent urethral sling placement at the time of diverticulectomy. The vast majority of patients had benign pathology with only two cases of malignancy identified (one CIS, one adenocarcinoma). Postoperative follow-up ranged from zero months to 15 years (Mean = 1.4 years; Median = 4 months). Forty-three patients had persistent urinary symptoms following diverticulectomy, with incontinence being the most common finding. Fourteen patients had a recurrence of their diverticulum. There were several major reasons why patients did not undergo diverticulectomy following their diagnosis, including the asymptomatic nature of the diverticulum and no further follow-up pursued by the patient.

The authors reported that this was the largest reported series on urethral diverticulum in females, which is a rare yet important entity that requires special consideration. 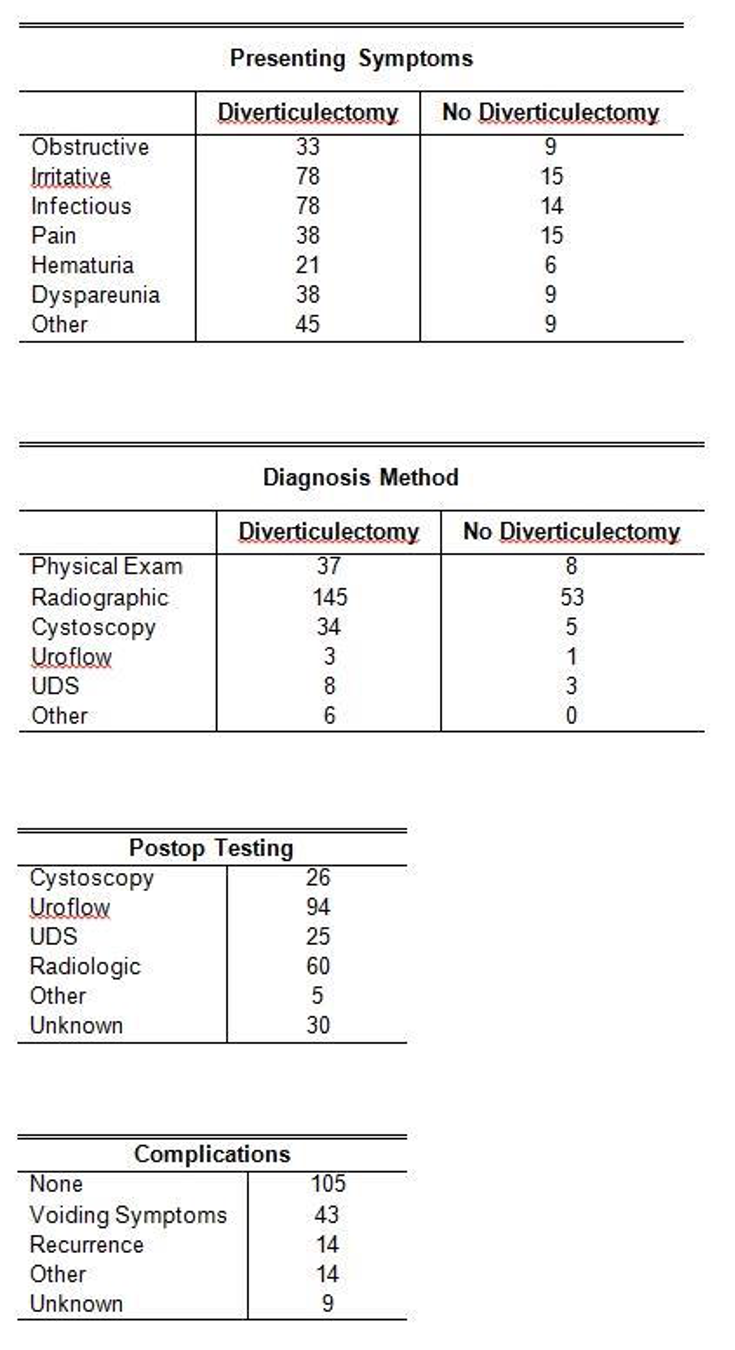