This website uses cookies to ensure you get the best experience on our website. Privacy Policy
Scottsdale, Arizona (UroToday.com) This study investigates changes in nocturia and its relevance to other clinical factors in patients with benign prostatic hyperplasia (BPH), before & after holmium laser enucleation of the prostate (HoLEP). Nocturia is one of many features of BPH and it is known to be one of the most resistant symptoms to improve after surgery.

There were 420 patients enrolled in this study and registered in the prospective BPH registry from September 2016 to November 2018. Evaluation before treatment included pre-operative transrectal ultrasonography (TRUS) and urodynamic studies (UDS). Questionnaires, including the International prostate symptoms score (IPSS), overactive bladder symptom score (OABSS), Nocturia Quality of Life (N-QOL) and Pittsburgh sleep quality index in Korean (PSQI-K), frequency volume chart (FVC), uroflowmetry, and postvoid residual volume were taken pre-operatively as well as post-operatively at two weeks, three months and six months. The relationship between the parameters of nocturia and pre-operative clinical parameters was examined. 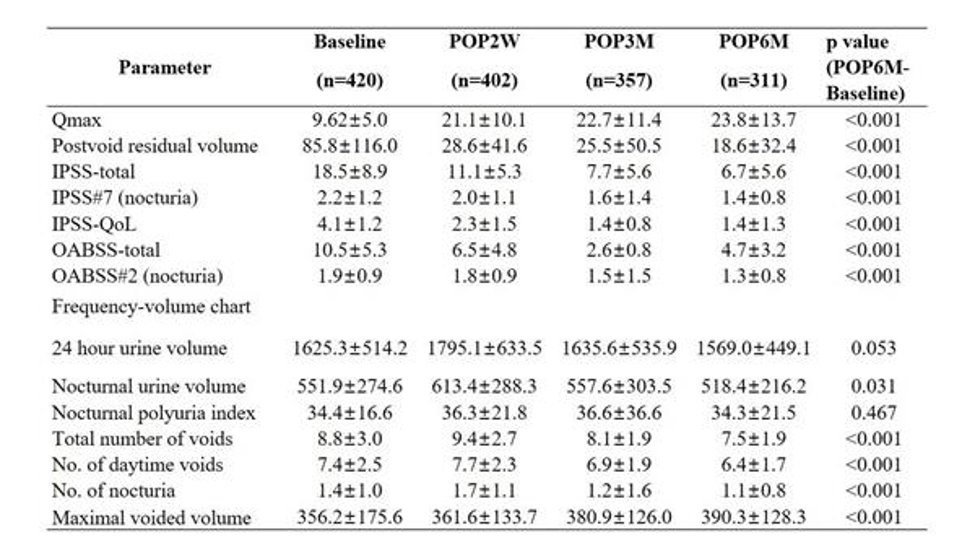