This website uses cookies to ensure you get the best experience on our website. Privacy Policy
Scottsdale, Arizona (UroToday.com) The purpose of this pilot investigation was to develop a novel method to evaluate objective responses to audio-visual urgency triggers using functional near-infrared spectroscopy (fNIRS) of the brain.

The authors recruited healthy participants with minimal urgency and those with overactive bladder (OAB) were recruited based on ICIq-OAB survey scores (question 5a ≤1 or ≥2). Participants completed a trigger survey asking if the sound or sight of running water (0-4 scale) made them feel more likely to rush to the toilet to urinate. Brain fNIRS data was collected using an Artinis Brite 24 head cap during an oral hydration study with simultaneous collection of real-time bladder sensation using a sensation meter on a 0-100% scale. At 50% sensation, a 1.5 min control period was compared to a following-up 3 min period where participants were exposed to an audio-visual video containing scenes of known urgency triggers (restrooms, pouring water, fountains/rain, waterfalls, and swimming). fNIRS oxygenated hemoglobin (O2Hb) data for the receiver located just above the right ear were filtered by a 0.1 Hz low-pass filter to reduce the noise. These data were analyzed to quantify relative changes in neuroexcitation and correlated with changes in participant-reported sensation.

There was a clean fNIRS data with relatively flat control signals were available for three OAB and two healthy participants. Two out of three OAB and two healthy participants demonstrated an increasing trend O2Hb during the trigger video. Figure 1 presents an example for a participant with OAB with relatively flat O2Hb in the control period (top) and an increase in O2Hb during the fountain portion of the trigger video (bottom) that also corresponds with an increase in sensation reported by the participant (bottom, red line).

These findings based on the authors indicate that fNIRS may provide a feasible tool for non-invasive identification of changes in neuroexcitation due to audio-visual triggers of urinary urgency. 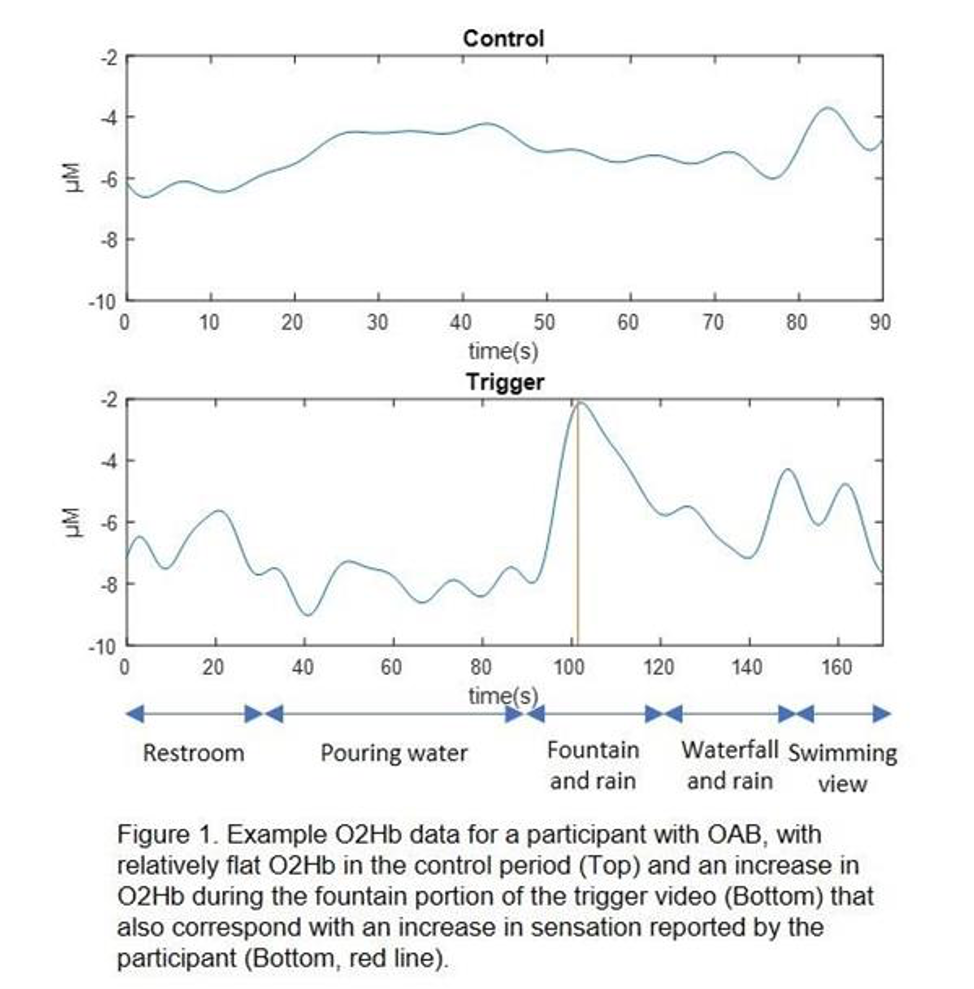