The pivotal phase III trial of radium-223 in mCRPC (ALSYMPCA) randomly assigned 921 patients, to radium-223 or matching placebo in a 2:1 ratio.1 The primary endpoint of this trial was overall survival, which showed at the interim analysis that radium-223 significantly improved overall survival compared to placebo (14.0 months vs 11.2 months; HR 0.70, 95% CI 0.55-0.88). The updated analysis confirmed that radium-223 survival benefit (median, 14.9 months vs. 11.3 months; hazard ratio, 0.70; 95% CI, 0.58 to 0.83). Hematologic and nonhematologic adverse events occurred in at least 5% of patients in either study group. Overall, no clinically meaningful differences in the frequency of grade 3 or 4 adverse events were observed between the study groups. Grade 3 febrile neutropenia was reported in one patient (<1%) in the radium-223 group and in one patient (<1%) in the placebo group. Only one grade 5 hematologic adverse event was considered to be possibly related to the study drug: thrombocytopenia in a patient in the radium-223 group, who died from pneumonia with hypoxemia, with no evidence of bleeding. For serious adverse events that occurred in at least 5% of patients in the radium-223 group or the placebo group, the respective frequencies were as follows: disease progression (11% and 12%), bone pain (10% and 16%), anemia (8% and 9%), and spinal cord compression (4% and 5%).

Previous studies have suggested that PSA is an unreliable marker for radium-223 response. Keizman et al.2 retrospectively evaluated the computed tomography (CT) and bone scintigraphy response of mCRPC patients treated with radium-223, in eight centers in three countries. Among 130 patients that were included, the majority (n=84, 65%) received radium-223 post docetaxel. In patients with available data, a transient increase in bone metastases-related pain was observed in 27% (n=33/124) and an improvement of bone metastases-related pain on treatment with radium-223 was noted in 49% of patients (n=61/124). An increase in PSA occurred in 80% (n=101 of 127 patients with available data) during radium-223 treatment, whereas 20% (n=26) had a decline in PSA (14%, n=18, had a PSA decline of >= 30%): 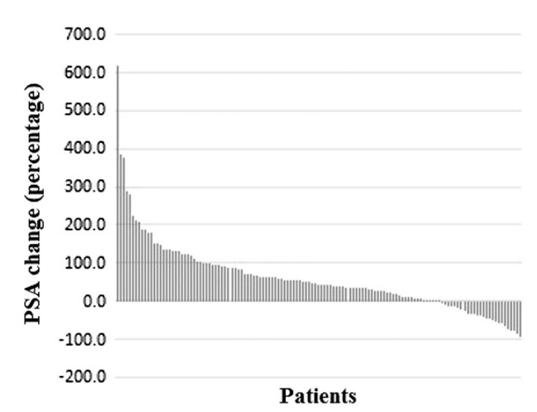 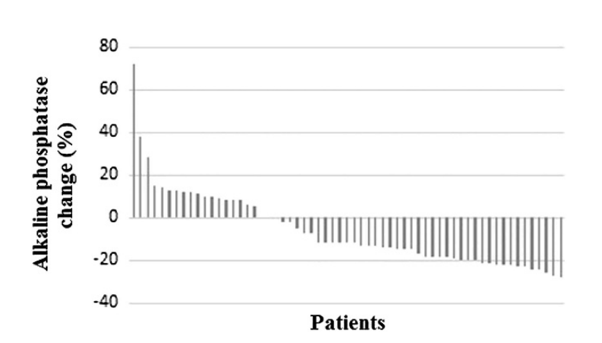 Importantly, imaging may be able to predict response to radium-223 with correlation with bone imaging uptake (MDP and NaF-18) and absorbed dose. Furthermore, bone scan index is a quantitative parameter of bone metastasis burden and may be predictive of response.

How much we can treat with radium-223 has been tested with higher doses, with 250 kBq/kg being well-tolerated in a phase 1 trial. Furthermore, in a phase 2 trial of three dosing regimens, high-dose (88 kBq/kg q4 weeks x 6) was associated with a higher rate of Grade 3 or higher adverse events and discontinuation of participation without significant improvement in outcomes. An extended regimen of 12 injections of standard dose (55 kBq/kg q4 weeks) was also associated with more severe adverse events, discontinuation, and without improved outcomes. Finally, retreatment with a second regimen of six standard dose injections has been reported as well tolerated. It is important to note that radium-223 should not be used in the setting of visceral metastases, concurrent hormonal therapy, chemotherapy, other systemic radionuclide therapy, or hemi-body radiation therapy, or spinal cord compression.

The role of radium-223 in the era of PSMA at this point is probably conjecture, but there is likely a smaller role for radium-223 given that PSMA can also treat soft tissue disease. However, there may be a continuing role in the case of bone only or bone predominant disease and it may continue when used as part of combination regimens. There are many questions that remain unanswered, including earlier use in the course of the disease, combination with other classes of agents, and dosimetry.

Dr. Lee concluded his presentation of the utilization of radium-223 with the following take-home messages: