Athens, Greece (UroToday.com) Dr. Robin Roberts gave an overview of the implementation of early detection of prostate cancer in the Bahamas.

In the Bahamas, 70-80% of patients are present with advanced prostate cancer, which is a staggeringly high number. Unfortunately, all the significant advances in the treatment of advanced prostate cancer in the last 15 years, since the introduction of docetaxel and until the more recent randomized trials of abiraterone, enzalutamide, and apalutamide, have brought treatments which are simply unaffordable in countries such as the Bahamas.

Screening of prostate cancer has been effectively shown to downstage prostate cancer, decrease the rate of diagnosis of metastatic disease, and lower mortality rates.1

A new screening project was formulated in the Bahamas to try and use this relatively “inexpensive” method to decrease the incidence of advanced disease. Four government community clinics were involved, not charging anything from men and performing screening at convenient times, usually in the evening, so that as many men as possible could freely come and be screened. This project was organized by volunteers from the “US TOO” organization and local urologists and residents. Each man who came to the clinic underwent a digital rectal examination (DRE) and prostate-specific antigen (PSA) test, performed by local hospitals at no charge.

Dr. Roberts moved on and presented the results of a ten-year period between 2004 and 2013. Overall, 5098 clinic visits had occurred with mean PSA levels increasing in accordance with age (Figure 1). When adding data up until 2018, a total of 7269 clinic visits involving 3406 men had occurred. In the following months, other islands in the Bahamas also got involved in this project, culminating in the fact that 22% of the male population older than 40 years in the Bahamas had been screened.

Figure 1 – PSA levels among men in the Bahamas screened for prostate cancer: 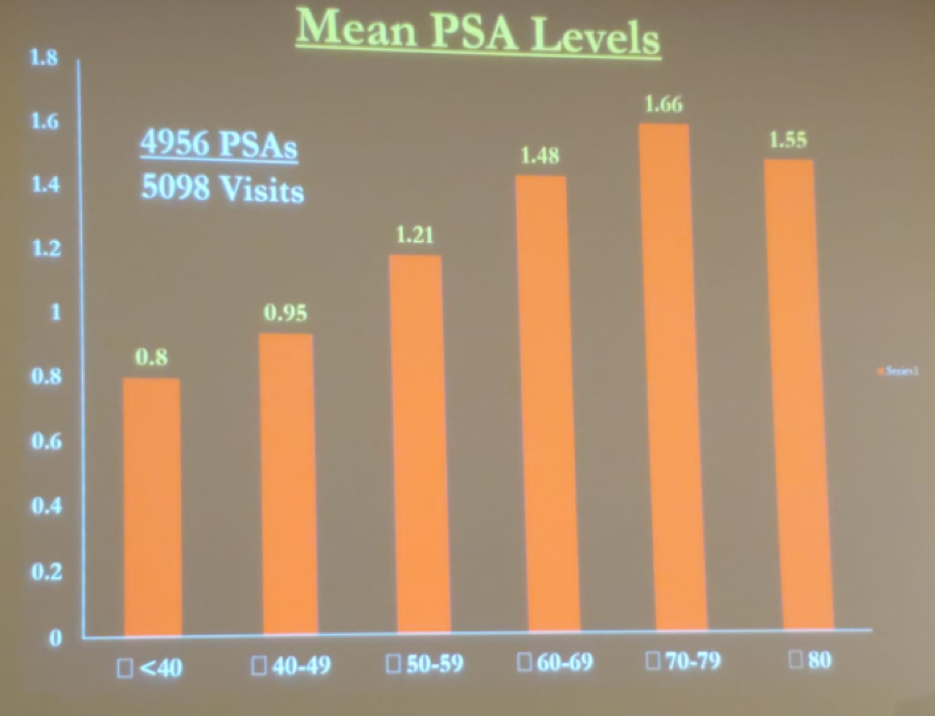 After collecting all data, the following combined criteria were used to refer patients to prostate biopsies:

In total, 45 men were biopsied, and 40/45 out of these men were demonstrated to have prostate cancer (2% of the entire male population that was screened). The positive predictive value was 89% with a mean age of 66.5 years. Of the 40 men who were diagnosed with prostate cancer, 10% had low-risk disease, 40% intermediate disease, and 50% had high-risk disease, according to the D’Amico risk classification. These data were recently published.2

Dr. Roberts emphasized that the compliance shown among the male population was extremely high with huge lineups of men each day, wanting to be screened. This project was utilized to create other health-related projects of lifestyle improvement, and treatment of chronic diseases such as diabetes, hypertension, hyperlipidemia, obesity and more.

Dr. Roberts concluded his presentation, emphasizing the fact that even in resource limited regions, prostate cancer screening can be implemented in an attempt to decrease the incidence rate of advanced disease, and improve prostate cancer-specific mortality.