(UroToday.com) The International Kidney Cancer Symposium 2021 annual hybrid meeting included a role of perioperative therapy in renal cell carcinoma (RCC) session and a presentation by Dr. Raquibul Hannan discussing the role of neoadjuvant stereotactic body radiotherapy in patients with RCC and IVC tumor thrombus. Among patients with newly diagnosed RCC, 4-10% of cases invade the IVC, with invasion ranging from the renal vein all the way to the right atrium (Level I   IV). Inherently, these tumors can be associated with a grave prognosis and fatal complications, including venous congestion, Budd-Chiari syndrome, pulmonary embolism and metastasis. The only potentially curative treatment for patients with an IVC thrombus is surgical resection, which is associated with a 35% rate of high-grade peri-operative morbidity and 5-13 rate of peri- and post-operative mortality. However, there is an increased risk of relapse and metastasis even after curative resection. 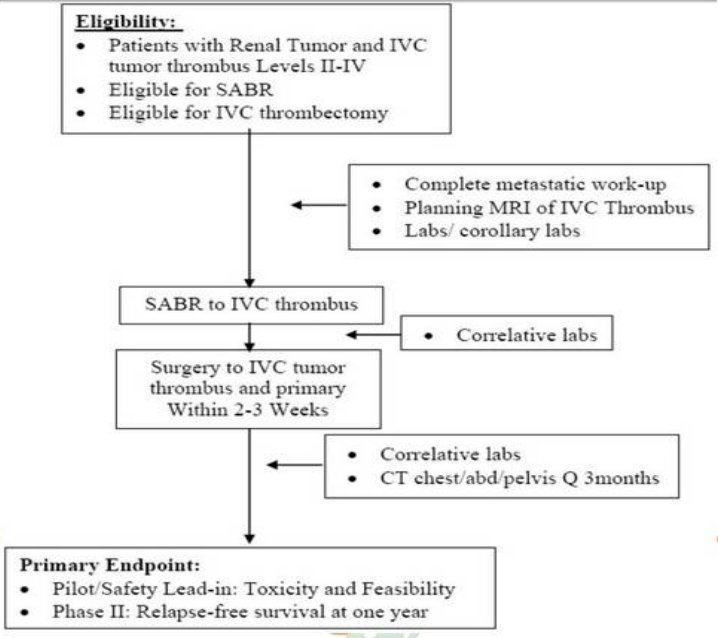 During the lead-in phase of the trial including six patients, there were no grade 4 to 5 adverse events observed [1]. A total of 81 adverse events were reported within 90 days of surgery: 73% (59/81) were grade 1, 23% (19/81) were grade 2, and 4% (3/81) were grade 3. After a median follow-up of 24 months, all patients were alive and one patient developed de novo metastatic disease. Among three patients with metastasis at diagnosis, one had a complete and another had a partial abscopal response without the concurrent use of systemic therapy. With regards to this trial, Dr. Hannan made the following conclusions:

Based on this feasibility analysis, there are several potential indications for stereotactic body radiotherapy including palliation of Budd-Chiari syndrome, treatment of unresectable or recurrent disease after surgery, treatment of refractory tumors to surgery and systemic therapy, cytoreduction (with systemic therapy) to make patients eligible for surgery, treatment of MRI evidence of IVC wall invasion leading to high changes of recurrence and/or positive margins (in either the post-operative or pre-operative setting), and treatment for patients that are eligible for radical nephrectomy but not for a more morbid/extensive vascular surgery for tumor thrombectomy.

Dr. Hannan then discussed several cases utilizing stereotactic body radiotherapy among patients with IVC thrombus RCC. The first case was a 38-year-old female that presented with flank pain and subsequently diagnosed by CT scan with a large infiltrative left renal mass with IVC tumor thrombus extending to the right atrium. An MRI confirmed that the tumor thrombus completely occluded the suprarenal IVC causing Budd-Chiari physiology in the liver due to obstruction of the hepatic venous confluence. Additionally, the right hepatic vein was thrombosed due to tumor. As such, surgical options were limited due to high mortality in the setting of Budd-Chiari; the metastatic work-up was otherwise negative. Subsequently, nivolumab was started, then stereotactic body radiotherapy of 40 Gy in 5 fractions was given, followed by ipilimumab. As follows is the baseline, stereotactic body radiotherapy plan, six weeks post-treatment, and 7 months post-treatment imaging, noting improvement in size and character of the IVC thrombus: 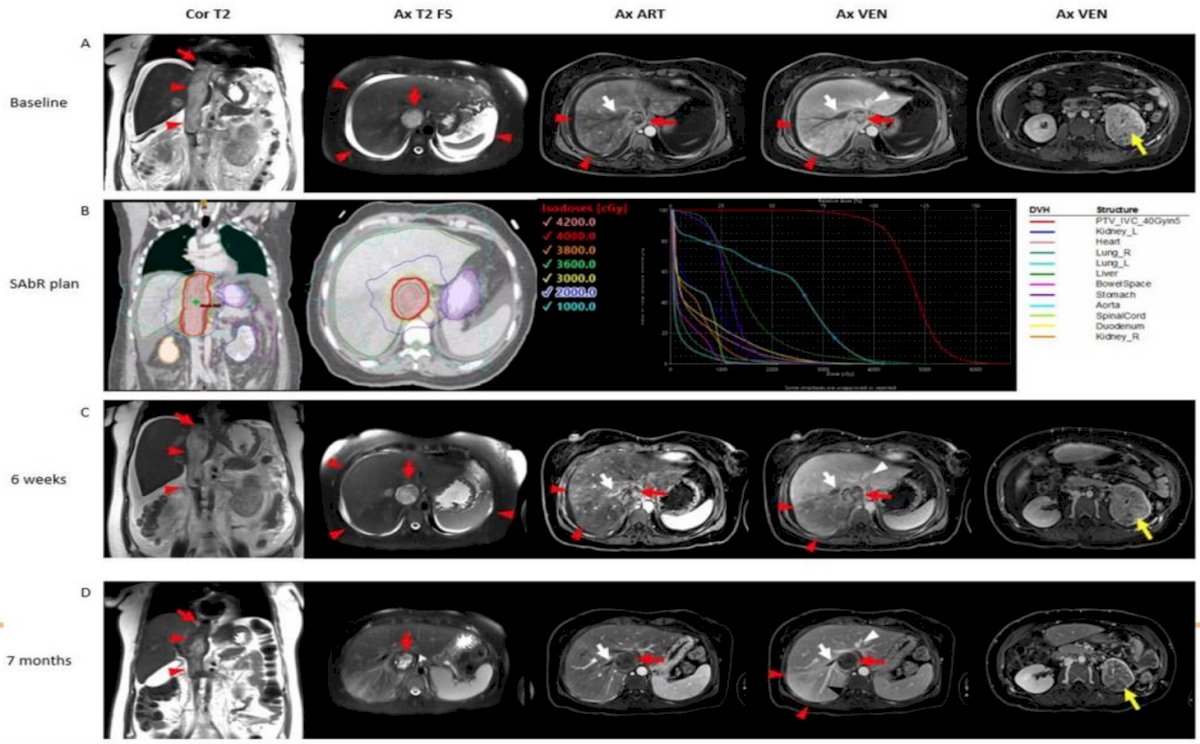 The patient subsequently had a radical nephrectomy and did well post-operatively and in follow-up.

The second patient was a 57-year-old male that presented with a pulmonary embolism in March 2018 and workup showed a cT3 left renal mass with an IVC tumor thrombus along with metastasis to the lung, liver, and lymph nodes. After a biopsy confirming RCC, he was started on nivolumab + ipilimumab followed by nivolumab maintenance and a partial response. He then presented in December 2020 with the only site of progression in his primary and IVC tumor thrombus and stable pulmonary nodules and no other disease. An MRI showed a 9 x 6 cm left kidney lower pole mass invading Gerota’s fascia with the tumor thrombus just below the level of the hepatic veins (level II) in the IVC:

The patient subsequently had a radical nephrectomy and tumor thrombectomy was considered too morbid in the setting of possible IVC wall invasion. The radical nephrectomy was performed in February 2021 and pathology showed ypT3aN0 clear cell RCC grade 3 with otherwise negative margins. Following his surgery, he underwent stereotactic body radiotherapy of the residual IVC tumor thrombus in March 2021 consisting of 36 Gy in 3 fractions. Follow-up scans showed a stable IVC thrombus and he is now doing well off systemic therapy.

The third case was a 60-year-old male who was initially diagnosed with left-sided RCC with a level IV thrombus in 2009. He underwent a left radical nephrectomy in December 2009 that excised a 10.7 cm grade 3 clear cell RCC, grade 3 with a positive renal vein tumor margin and inability to complete the thrombectomy. Following surgery, he was treated with sunitinib from January 2010 to September 2012 after which he underwent IVC thrombectomy (residual level 4) with cardiopulmonary bypass, with pathology showing clear cell RCC tumor thrombus, grade 2 with associated necrosis, fibrosis and adherent blood clot. Following surgery, he was NED on follow-up scans until February 2021, at which point two areas of arterial enhancing mass in the infra-hepatic IVC was consistent with RCC recurrence:

At this point, re-resection was deemed not possible and both sites were treated with stereotactic body radiotherapy comprising 39 Gy in 3 fractions with an excellent response.