(UroToday.com) In a session of the 2021 International Kidney Cancer Symposium (IKCS): North America meeting focused on the role and effects of adjuvant immunotherapy in renal cell carcinoma (RCC) on subsequent first-line therapy, Dr. Choueiri provided an overview of his perspective of the future of adjuvant therapy in this disease space.

Dr. Choueiri began with a historical perspective. The first randomized clinical trial in renal cell carcinoma was published in the British Journal of Urology in 1973, examining the role of radiotherapy. Radiotherapy was tested and found not to have benefit. Subsequently, in the 1980s and 1990s, cytokine therapy became standard of care for the treatment of patients with metastatic renal cell carcinoma (mRCC). Following adoption as a standard of care in mRCC, cytokine therapy was tested as adjuvant treatment. As highlighted in the table below, seven different trials showed no difference in outcome for patients who received adjuvant therapy.

Following these studies, Dr. Choueiri highlighted data published by Dr. Chris Wood examining an adjuvant autologous therapeutic vaccine in a phase III randomized trial among patients with high-risk of recurrence following nephrectomy. While this trial was negative, Dr. Choueiri emphasized that this was, conceptually, an important step forward in our thinking.

Tyrosine kinase inhibitors then became standard of care for patients with mRCC. Following their approval and routine clinical use in this space, they were then examined in adjuvant therapy. Dr. Choueiri described these as “completely negative” studies. However, S-TRAC (the only positive trial) was among the smallest of these studies and included patients with higher risk disease. Further, no sunitinib dose decreases were allowed. While S-TRAC demonstrated improvements in disease-free survival, no overall survival benefit was observed. On the basis of these data, sunitinib was approved by the FDA but not European agencies though is not widely used.

Dr. Choueiri then highlighted data from a secondary analysis of the ASSURE trial, focusing on a high-risk subset defined according to criteria similar to S-TRACT inclusion criteria. This led to a sample size larger than the S-TRAC trial. In this analysis, no benefit was seen with adjuvant tyrosine kinase inhibitor. Additionally, patients who received the highest dose of adjuvant tyrosine kinase inhibitor did not derive substantially greater benefit from the remainder of the sample suggesting that this dosing question did not substantially modify the benefit of adjuvant therapy.

In mRCC, immune checkpoint inhibitors then were examined and rapidly became standard of care. Their demonstrated benefit in the metastatic setting formed the basis for trials of immune checkpoint inhibitors in the adjuvant setting. Currently, there are five large trials of this approach, one of which (KEYNOTE-564) has reported results as of ASCO 2021.

The KEYNOTE-564 trial enrolled patients with confirmed ccRCC who underwent curative intent nephrectomy. Patients could not have had prior systemic therapy and had to have good performance status. Patients were randomized in a 1:1 fashion to receive either 1 year of pembrolizumab 200mg every three weeks or placebo and followed for the primary endpoint of investigator-adjudicated disease-free survival.

Importantly, Dr. Choueiri emphasized that lots of time and effort were expended to determine risk categories and inclusion criteria. He emphasized that nomograms have relatively poor ability to discriminate, and only marginal improvements compared to TNM staging. In the end, the authors included patients in three pre-specified disease risk categories (intermediate-high risk, high risk, and M1 NED).

He further emphasized that M1 NED is “important niche” in which adjuvant tyrosine kinases have failed to show benefit. Among the enrolled patients, the majority of patients (86%) had M0 intermediate-high risk disease.

Dr. Choueiri highlighted that the KEYNOTE-564 trial met the primary endpoint at 24-months, with an approximately 9% absolute difference in disease free survival at this point. Notably, he emphasized that the curves continue to separate even after the cessation of pembrolizumab at 1-year.

He further emphasized that, across all subgroups, hazard ratios were less than 1, though some subgroups were very small leading to wide confidence intervals. 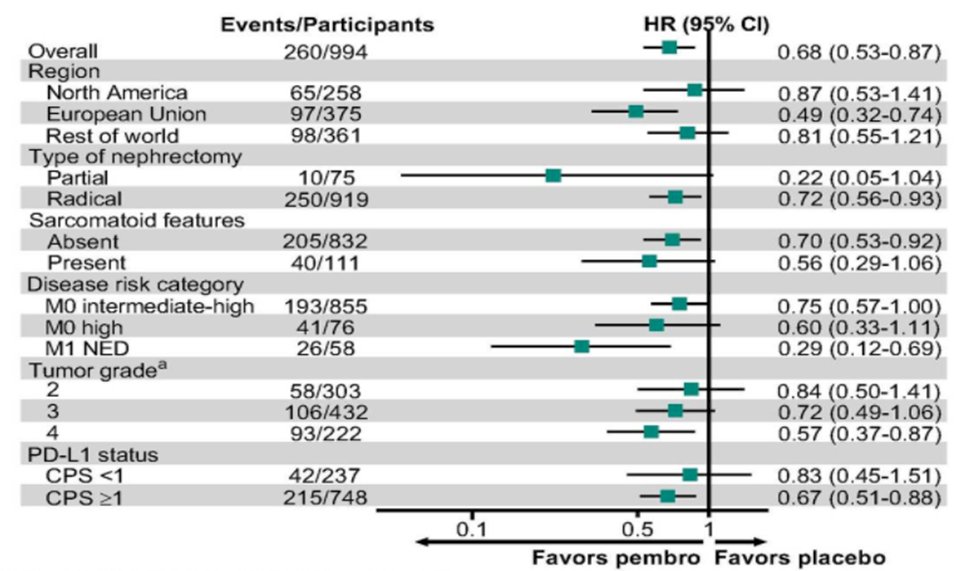 Dr. Choueiri highlighted that, as of the ASCO 2021 presentation, there was an early planned look at OS. Based on the initial study design, 200 overall survival events are required for definitive analysis of which only 51 events have been observed.

As would be expected, compared to a placebo control, adjuvant pembrolizumab was associated with higher toxicity, with an almost double rate of serious all cause AEs (20.5% vs 11.3%). Further, treatment discontinuation was much higher (17.6% vs 0.6%). However, no deaths related to treatment-related adverse events were observed. Many of these were immune-mediate adverse events, the majority of which were hypothyroidism and hyperthyroidism. While there are small numbers for many, some serious immune-related adverse events were observed and 7% of patients required use of high-dose corticosteroids.

He further emphasized that quality of life data, including physical function, have overlapping confidence intervals suggesting no decrease in quality of life for patients receiving adjuvant therapy.

Dr. Choueiri then considered how we many adopt these data, following FDA approval, highlighting two schools of thought: immediate adoption versus a more cautious approach.

In particular, he emphasized that kidney cancer remains first and foremost a surgical disease in the non-metastatic setting. Therefore, adjuvant therapy will always be overtreatment for a subset of patients.

He further considered the validity of investigator-assessed disease-free survival. This has been used for approval in other cancers and in renal cell carcinoma (in the case of S-TRAC). Additionally, the 2003 ODAC consensus highlighted the important clinical benefit of DFS where this outweighs the toxicity of adjuvant therapy. Citing data from Dr. Haas presented at ASCO 2021 using data from SEER, he highlighted evidence that disease-free survival correlates strongly (Kendall’s Tau = 0.7) in patients with non-metastatic intermediate-high or high-risk renal cell carcinoma who underwent nephrectomy. However, correlation does not provide surrogacy and ongoing analyses are underway to assess the surrogacy of DFS in this setting.

He then presented a comparison between the S-TRAC study and KEYNOTE-564. Notably, among patients on the placebo control arm, 2-year DFS rates were similar between the two trials (68% in S-TRAC and 68.1% in KEYNOTE-564). Toxicity higher in S-TRAC with use of sunitinib compared to KEYNOTE-564 with the use of pembrolizumab.

While Signatera testing for bespoke ctDNA testing based on the tumor genetic make-up, worked well in urothelial carcinoma (as highlighted in Dr. Powles work), this approach was relatively poor in renal cell carcinoma. In this setting, sensitivity was 44% and negative predictive value was 55%, limiting its value. He emphasized that this is likely because kidney cancer has the second lowest rate of ctDNA shedding.

Instead, he suggested an approach using cfMeDIP-seq. This approach, in 34 patients with mRCC had a sensitivity of 100% and specificity of 88%. Compared to whole genome bisulfite sequencing, this approach using immunoprecipitation has the advantages of a lower DNA requirement (decreasing the volume of blood required and increasing applicability to banked clinical samples), a lower cost, an ability to enrich for cancer DNA at cancer-specific methylation sites (increasing sensitivity), and the fact that no base modification is needed (allowing an ability to preserve DNA sequences for mutational analysis). Preliminary data using this approach among 41 patients with stage I-IV ccRCC showed an AUC of 0.990. Further work among patients with minimal residual disease and using a urine based assay is underway.

Moving forward, he highlighted that further analyses from the KEYNOTE-564 trial will include central review of disease-free survival, analysis of overall survival, and tissue and blood-based biomarkers. However, there remain many unanswered questions including non-clear cell histologies, the role of adjuvant therapy for other indications (including M1 NED, those with lower risk RCC, and those with positive microscopic margins), and the question of how to de-escalate or escalate care (including the proposed ALLIANCE TAPER/PREPARE trial and the CheckMate-914 trial).


Presented by: Toni K. Choueiri, MD, Director of the Lank Center for Genitourinary (GU) Oncology at Dana-Farber Brigham Cancer Center and the Jerome and Nancy Kohlberg Chair and Professor of Medicine at Harvard Medical School