(UroToday.com) The International Kidney Cancer Symposium 2021 annual hybrid meeting included a non-clear cell renal cell carcinoma (RCC) session and a presentation by Dr. Ivan Pedrosa discussing phenotypic characterization of renal masses by a virtual biopsy approach. Dr. Pedrosa notes that many renal masses are found incidentally, typically by a single-phase ‘total body’ contrast-enhanced CT scan (not a typical renal phase CT scan), and thus may not be completely characterized. The imaging dilemma after a single-phase contrast-enhanced CT scan is that we may not know if the renal mass is a malignancy and the patient requires a pre- and post-contrast CT, an MRI or an ultrasound.

Approximately 70% of kidney cancers are diagnosed as an ‘incidental’ finding on imaging and at early stages at diagnosis. As such, over the last several years, kidney cancer incidence has increased markedly from 7.1/100,000 in 1975 to 14.9/100,000 in 2016, secondary to this increased utilization of abdominal imaging. Several specific examples include 27% of healthy patients undergoing an MRI having renal cysts and 14% of patients undergoing a low-dose unenhanced CT for colon cancer screening having a renal mass. Taking this data into context, Dr. Pedrosa summarized that among 3,000 patients, 420 will have renal masses, 50 (2%) will be indeterminate, and 5 will be RCC (0.2%).

The most recent update (2021) of the AUA guideline on renal masses and localized renal cancer1 emphasizes that the evaluation and diagnosis of a renal mass should include obtaining a high quality, multiphase, cross-sectional abdominal imaging to optimally characterize/stage the renal mass. Based on the presence or absence of fat on the CT scan, Dr. Pedrosa provides the following diagnostic algorithm: 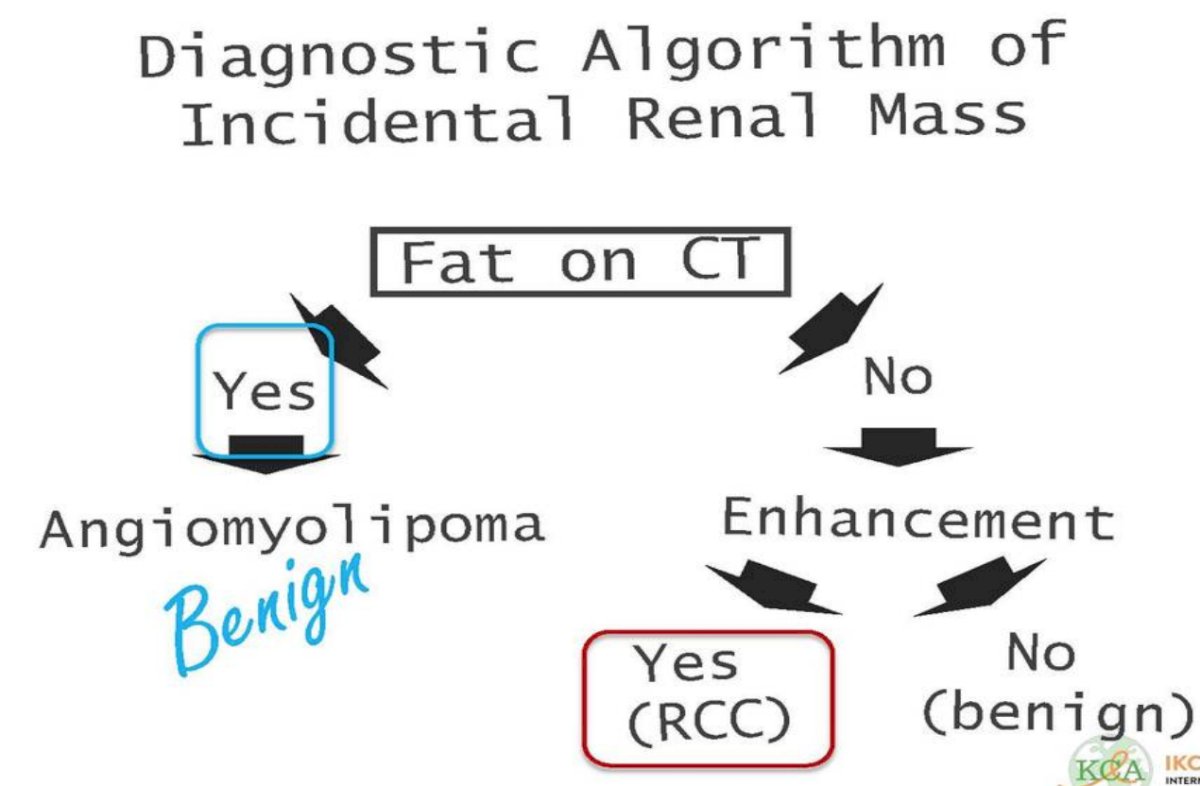 Dr. Pedrosa highlighted that ~20% of T1a (<4 cm) resections are benign, with an 82% increase in surgery for benign disease between 2000-2009. Partial nephrectomy is associated with morbidity (13% of patients having a grade 2-3 complication rate) and rare mortality (0.1%), in addition to nephron loss is associated with increased cardiovascular events and decreased survival. The cost of benign nephrectomies in the US in 2014 was estimated to be $153 million/year ($55,573/individual). As such, benign partial nephrectomies are associated with significant patient burden and health care costs.

There are certainly pros and cons associated with biopsying renal masses, as emphasized by Dr. Pedrosa. Pros of renal mass biopsy include it leading to a definitive diagnosis (sensitivity of 97.5%, specificity of 97.2%, and PPV of 99.8%) and reducing the number of benign nephrectomies. Cons of renal mass biopsy include: (i) it is invasive (patients do not like it, it may have complications such as hemorrhage, pain, and hematuria, as well as increased cost) and (ii) diagnostic performance can be an issue in that it may not be feasible or it may not be able to be performed and/or it may be non-diagnostic. Importantly, 37% of benign biopsies represent malignant disease.

Among small-renal masses (<= 4 cm), clear cell is the most common histology and also the fastest growing while under surveillance: 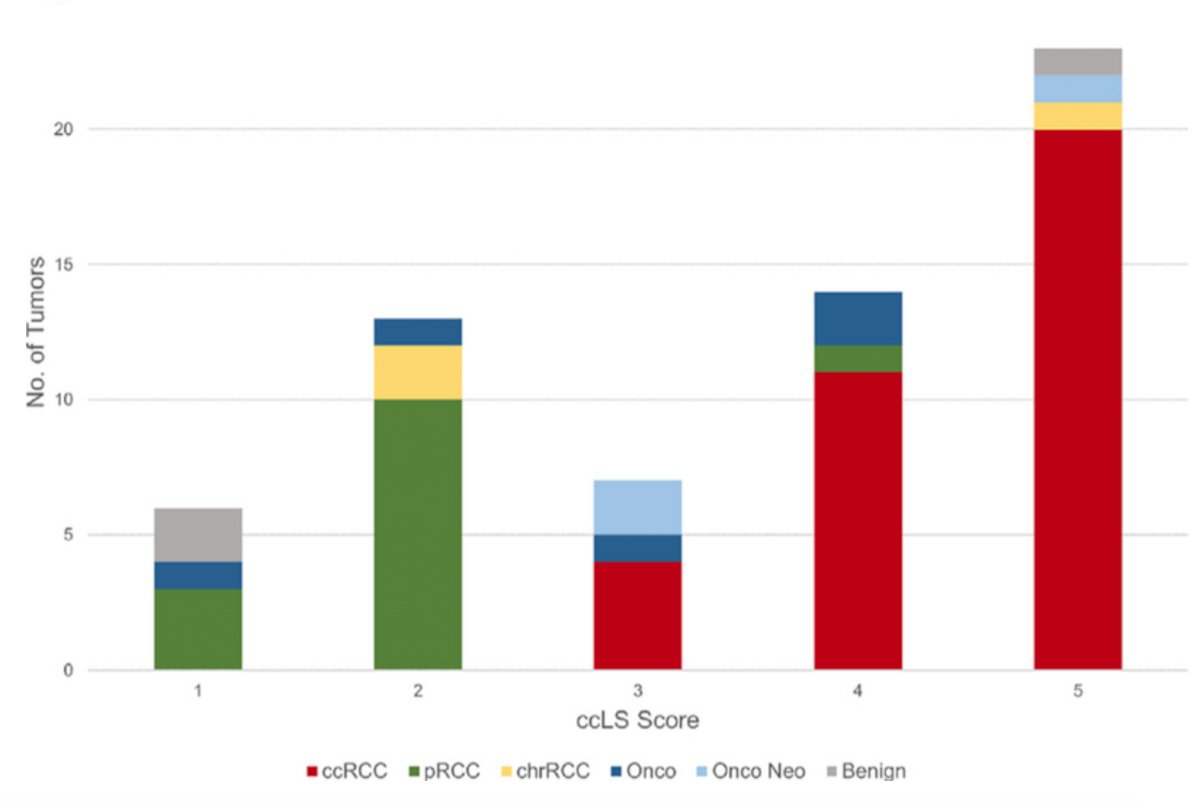 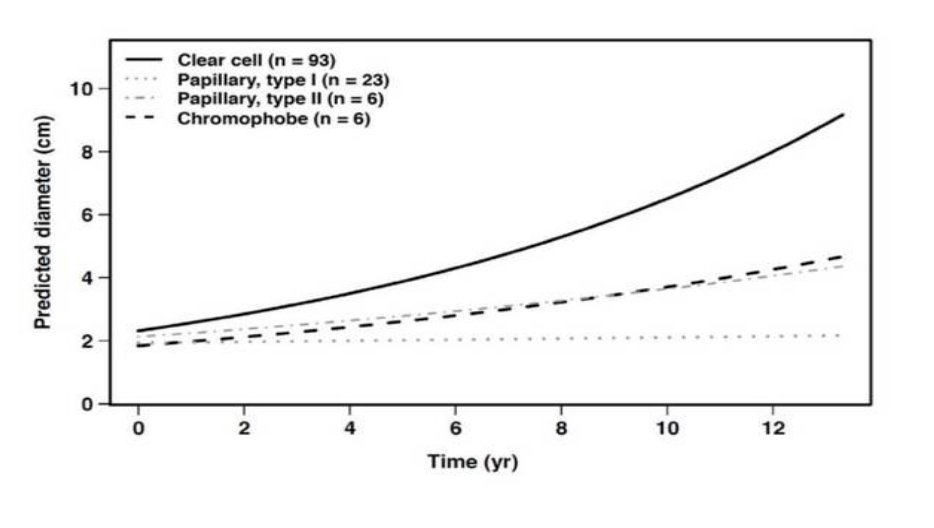 Dr. Pedrosa concluded his presentation of the virtual biopsy for characterizing small renal masses with the following take-home message: