This website uses cookies to ensure you get the best experience on our website. Privacy Policy
(UroToday.com) STAG2, part of cohesin, a complex involved in chromosome organization and DNA repair, has been described as a tumor suppressor gene in bladder cancer.1 While the mechanisms by which STAG2 contributes to bladder carcinogenesis have not been clearly elucidated, it has been proposed that they involve processes different from altered chromosome segregation. STAG2 inactivation is associated with differentiated, luminal tumors that are significantly enriched in the PPARg pathway, a driver of urothelial differentiation.

Drs. Lapi, Real, and colleagues explored the hypothesis of whether STAG2 inactivation alters stemness and differentiation balance in bladder cancer. Using RNAseq data, they demonstrate that loss of STAG2 expression is significantly associated with the luminal subtype of bladder cancer. They noted that spontaneously immortalized NU-1 cells undergo urothelial differentiation upon PPARg activation and EGFR inhibition. In differentiated NU-1 cells, STAG2 localizes predominantly at promoters and enhancers and is important for transcriptional regulation of the associated genes. Integrated ChIPseq and co-IP data indicated that PPARg and STAG2 are present in the same complex and cooperate in the regulation of tissue-specific transcription. They demonstrated that Stag2 knock out urothelial cells had higher clonogenic potential. Concomitant STAG2 loss and urothelial damage lead to hyperplasia, which suggested a role in homeostatic regeneration.

Overall, the data suggest that STAG2 cooperates with PPARg in regulating urothelial differentiation and its loss alters gene expression, priming cells to proliferate (Figure). Accumulation of additional molecular events may then push the cell towards neoplastic transformation. 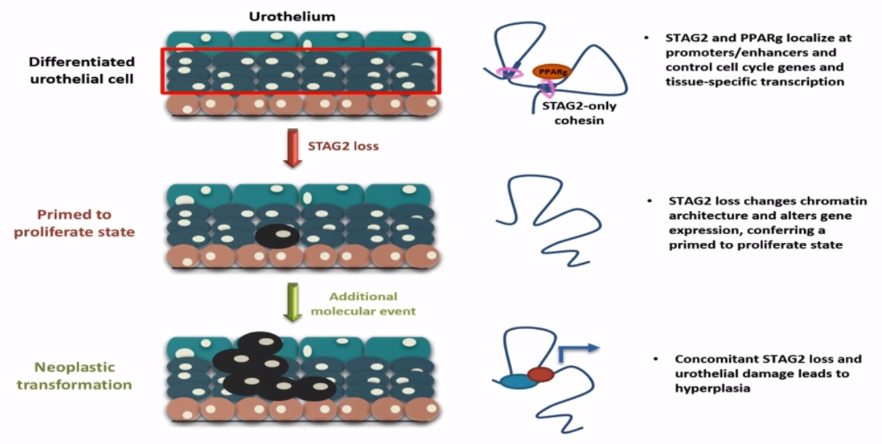