(UroToday.com) In the Controversy session of the European Society for Medical Oncology (ESMO) Annual Congress, Dr. Karim Fizazi and Dr. Ronald De Wit debated the question of whether enhanced androgen signaling inhibition should be the treatment of choice for treatment of metastatic castration sensitive prostate cancer (mCSPC) rather than docetaxel. Presenting second, Dr. de Wit supported the use of docetaxel.

He began by discussing the extent of benefit and quality of life during and after treatment with docetaxel. Highlighting data from both CHAARTED and STAMPEDE, he emphasized the robust and durable responses of docetaxel in both metastatic and non-metastatic castration-sensitive prostate cancer. He further emphasized the updated data from CHAARTED demonstrating that the benefit of docetaxel is focused among men with high-volume disease. However, based on data reported at ESMO 2019, the analysis of STAMPEDE showed a relatively consistent benefit of the addition of docetaxel in both low and high burden diseases.

Further, he emphasized data from Dr. Morgans and colleagues using the CHAARTED dataset who showed that quality of life (measured with the FACT-P) was improved in patients with high volume disease who received docetaxel, compared to those who received ADT alone, given improved disease control. In contrast, in the low-volume patients, there was no detrimental effect but a relative lack of benefit. Dr. de Wit further emphasized that docetaxel can be given with only 18 weeks of treatment.

Dr. de Wit highlighted that there are no direct randomized data comparing these two approaches. However, a non-randomized comparison of patients in the STAMPEDE study who were contemporaneously randomized to either abiraterone acetate or docetaxel provides some data. Notably, these agents work in different ways. In these head-to-head non-randomized data, Dr. de Wit highlighted that there is no evidence of a difference in either cause-specific or overall survival.

Based on this analysis, Dr. de Wit then focused on the differences between these treatment approaches in terms of toxicity. Overall, rates of both Grade 1+ and Grade 3+ adverse events were similar between the two groups. However, he emphasized that both cardiovascular disorders and hepatic disorders were more common in those receiving abiraterone, three- and nine-times higher, respectively. Given the prevalence of cardiovascular disease, he suggested that this may prompt some concerns regarding the use of abiraterone.

He further pointed out that the long-term use of prednisone necessitated with an abiraterone-based treatment approach may dissuade its use. However, he suggested that, based on data from both ARCHES, ENZAMET, and TITAN, we may use enzalutamide or apalutamide instead. However, these agents have their own adverse event profile and he, in particular, noted the rates of fatigue, asthenia, and cognitive effects that may meaningfully affect patient quality of life. Further, highlighting data from TITAN, he showed no evidence of improved health-related quality of life for patients receiving apalutamide in addition to ADT, despite the improved efficacy. Harkening back to data he previously presented from CHAARTED, he reminded us that the use of docetaxel improved FACT-P scores in patients with high volume disease, through tumor control.

He then moved on to outline a number of concerns with the study design of trials supporting the use of androgen signaling inhibitors. First, he emphasized that LATITUDE, ARCHES, and TITAN were all industry-sponsored trials that use radiographic progression-free survival as a co-primary endpoint. Patients continued on their randomized treatment approach until documented radiographic progression. This delayed the initiation of the next line of therapy by up to 6 months in his view. Thus, while androgen signaling inhibitors were approved in mCRPC during the time these studies were conducted, the double-blind nature of the study resulting in the under-utilization of effective life-prolonging therapies when patients progressed. Supporting this, he presented data from LATITUDE showing that utilization of abiraterone or enzalutamide as subsequent life-prolonging therapy was relatively uncommon. 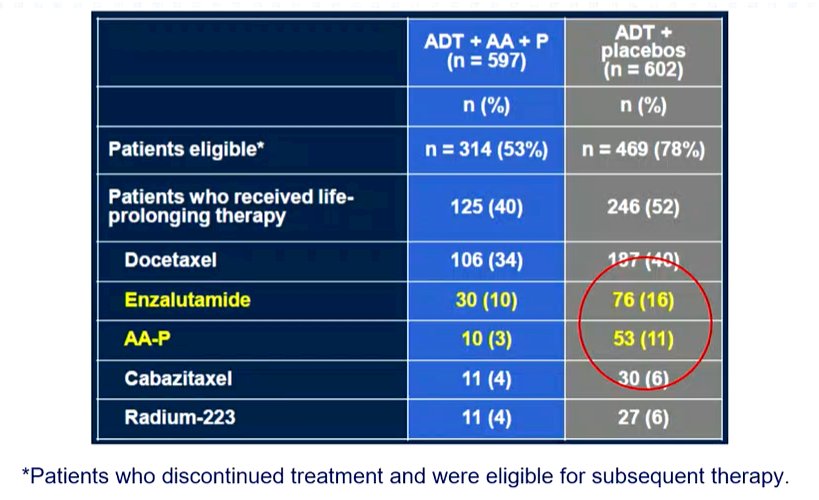 A similar effect is seen in the ARCHES trial and in TITAN. Though absolute rates were somewhat higher in these trials than in LATITUDE, they fall well below the accepted standard of care for patients with mCRPC. While STAMPEDE was open-label, there was under-utilization of abiraterone and enzalutamide among patients who progressed on standard of care due to inconsistent availability. This, therefore, hampers the generalizability of these data to modern practice in which these agents would be routinely used for patients with mCRPC who had not previously received an advanced androgen targeting approach.

Finally, he considered the question of cost. Citing data from the Georges Pompidou Medical Center in Paris, France, he emphasized that the total cost of care for a patient treated with abiraterone is nearly 10x higher than a patient receiving docetaxel.

While this will likely improve over time as abiraterone becomes generic, the costs associated with use of enzalutamide and apalutamide in this disease space are likely to remain stable.