(UroToday.com) In this presentation, Dr. Toni Choueiri discussed patient reported outcomes (PROs) from KEYNOTE-564, a randomized phase 3 study of adjuvant Pembrolizumab versus placebo in patients with renal cell carcinoma (RCC). Results of the KEYNOTE-564 trial, initially presented at the ASCO 2021 Annual Meeting and recently published in the New England Journal of Medicine, demonstrated an improvement in disease-free survival at 24 months for patients randomized to receive adjuvant Pembrolizumab (77.3%) versus placebo (68.1%) (HR 0.68, 95% CI 0.53-0.87; P = 0.002).1 Overall survival data was immature and did not cross the pre-specified statistical threshold for this preliminary analysis, but at 24 month trended towards improvement for patients on the Pembrolizumab (96.6%) compared to the placebo (93.5%) arm (HR 0.54, 95% CI 0.30-0.96; P = 0.0164).

The two PRO assessment instruments evaluated in this study were FKSI-DRS and EORTC QLQ-C30. FKS-DRS evaluates the most important symptoms associated with advanced kidney cancer. EORTC QLQ-C30 is a broader assessment that includes five functional scales, three symptom scales, and a global health status / quality of life scale. Based on prior literature, the threshold for a clinically meaningful change from baseline was 3 points for the FKSI-DRS and 10 points for EORTC QLQ-C30.

The first PRO discussed was change from baseline at 52 weeks, which was a pre-specified secondary endpoint. FKSI-DRS scores were minimally decreased on both arms, but did not meet the threshold for meaningful change in either trial arm. Further, the confidence intervals for the two arms overlapped, indicating no significant decrease in symptoms during the year of adjuvant treatment. Likewise, for the symptom scale scores and health-related quality of life (HRQoL) scores included in the EORTC QLQ-C30, there was no clinically meaningful change from baseline on either study arm at 52 weeks. 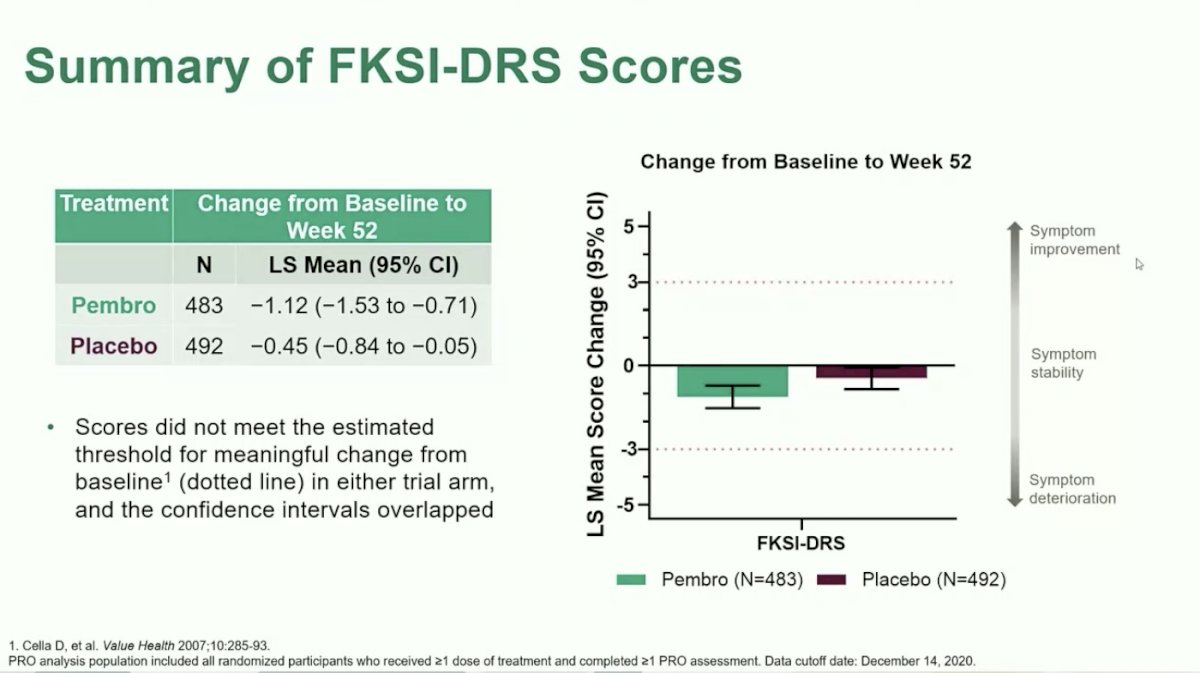 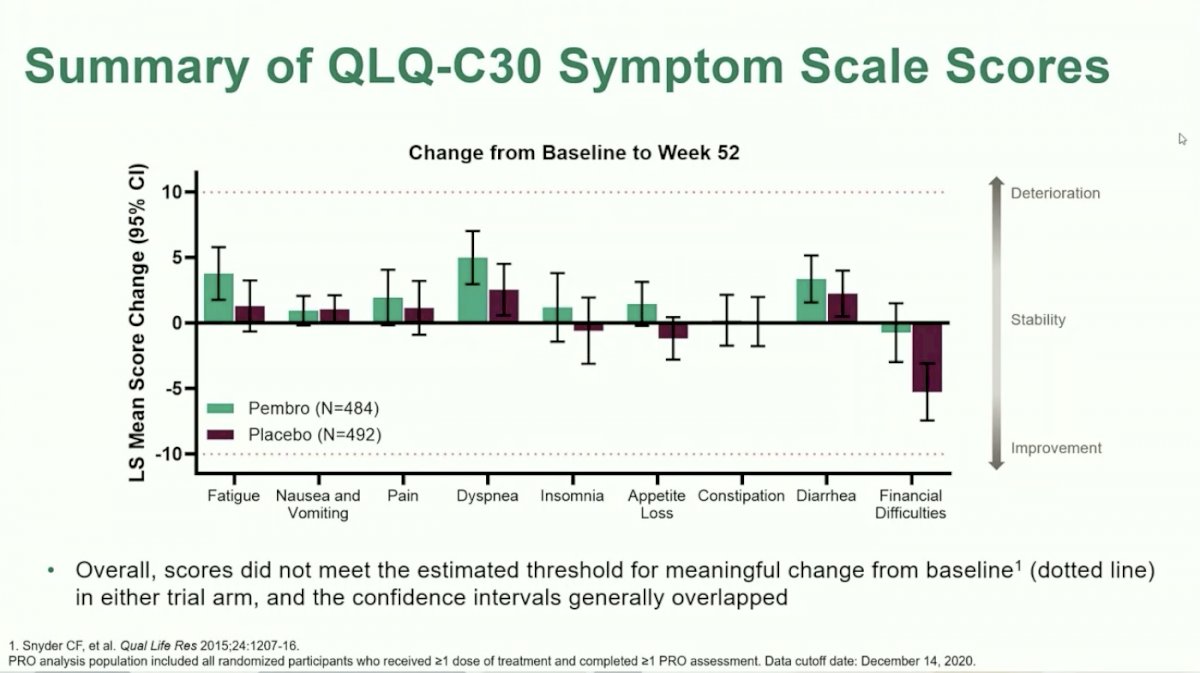 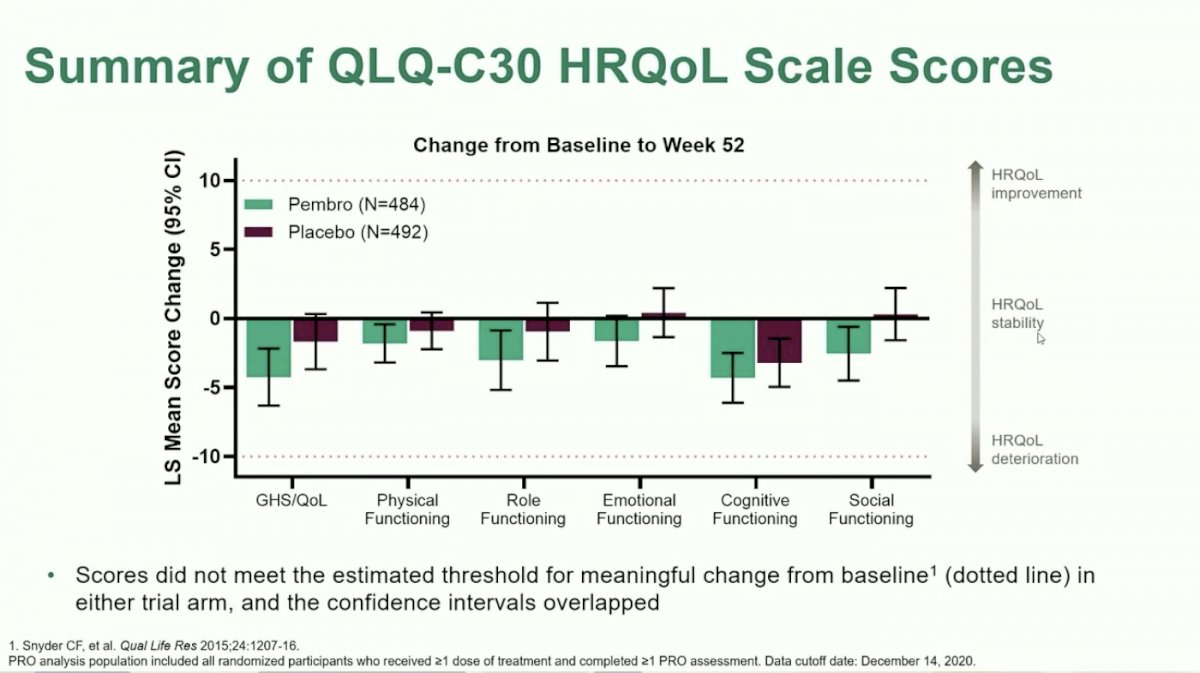 Dr. Choueiri moved on to discuss the first of two exploratory analyses: line plots for mean change from baseline over time. PRO scores were consistently numerically lower for patients treated with Pembrolizumab versus placebo over time, however, mean changes from baseline were not clinically significant. Likewise, there were no significant differences between arms. 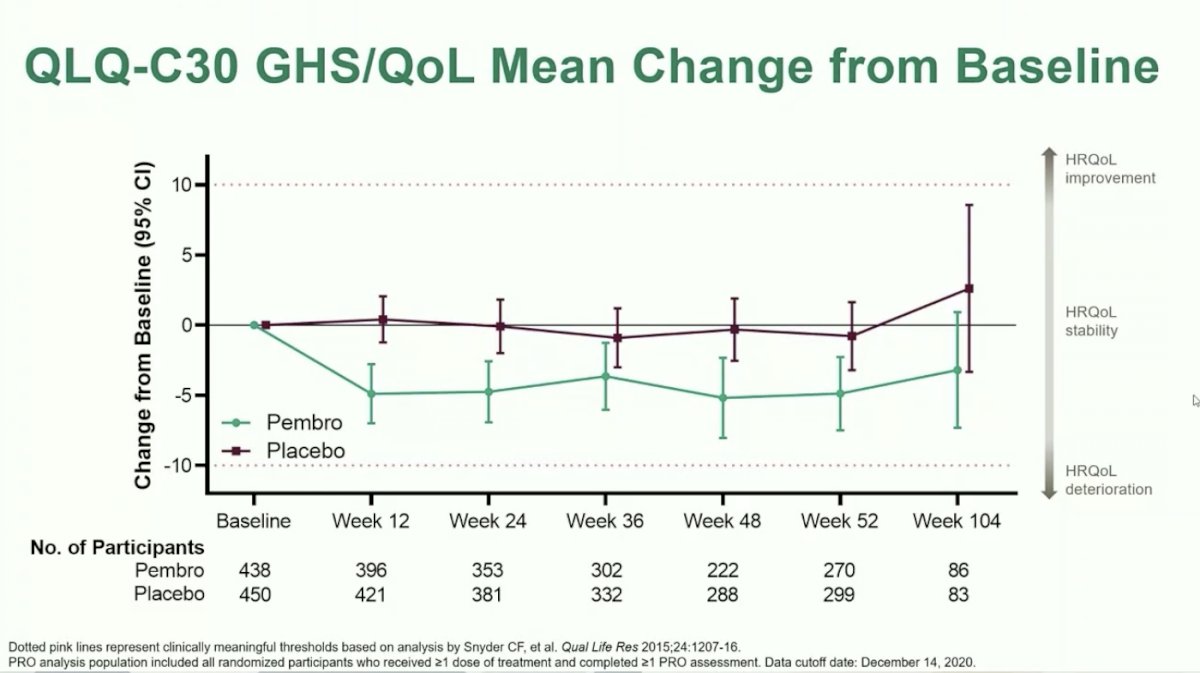 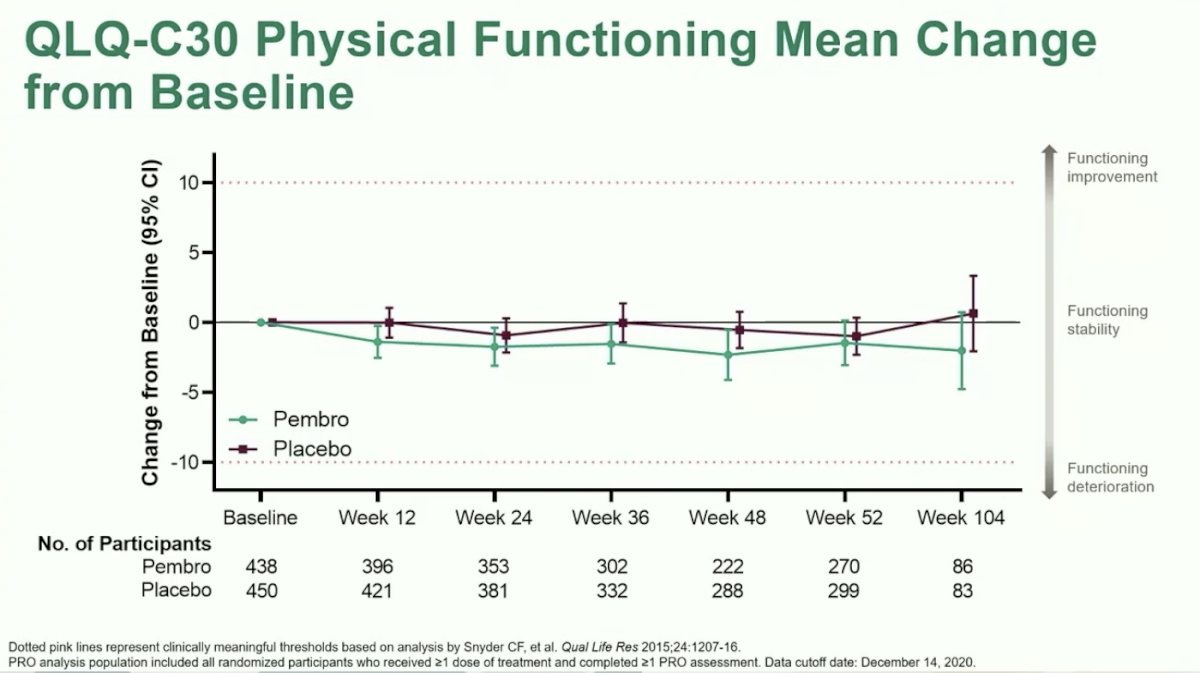 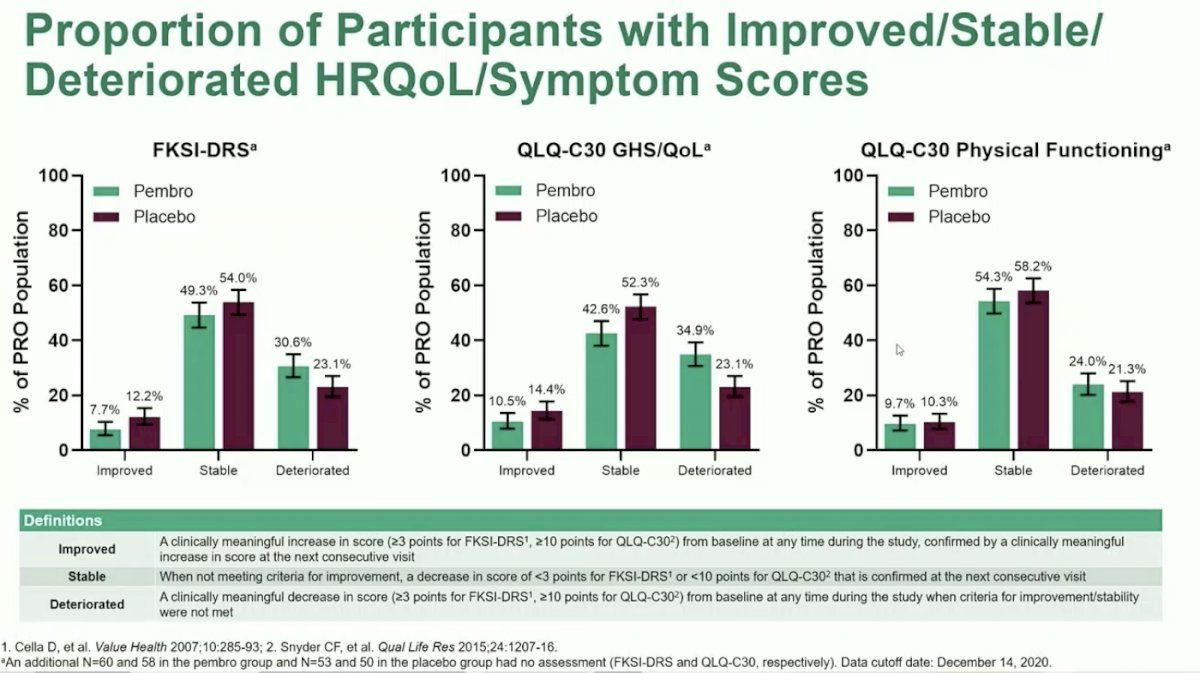 Dr. Choueiri concluded by emphasizing that in KEYNOTE-564, the first positive phase 3 study of adjuvant immunotherapy in RCC, there was no clinically meaningful difference in HRQoL or symptom scores for patients treated with Pembrolizumab compared to placebo. Scores on both treatment arms remained stable over the reported study period and disease-related symptoms were rarely severe at this disease stage. In summary, PROs from the KEYNOTE-564 study support the reported efficacy and safety findings from the first pre-specified analysis and establish Pembrolizumab as a potential new standard of care for patients with RCC in the adjuvant setting.