(UroToday.com) Following presentations from Dr. Sadeghi on the role of pembrolizumab and sEphB4-HAS in patients with previously treated metastatic urothelial carcinoma and from Dr. Pfister on the role of ddMVAC as neoadjuvant chemotherapy in those with muscle-invasive disease, Dr. Enrique Grande provided an invited discussion to contextualize these papers in the Proffered Paper session of the European Society for Medical Oncology (ESMO) Annual Congress focusing on non-prostate cancer genitourinary tumors.

Dr. Grande began by highlighting that these data represent potentially practice-changing results (from VESPER) and the introduction of a new therapeutic paradigm (with EphrinB2 targeting).

Beginning with the VESPER trial, Dr. Grande emphasized that there are numerous key questions in the perioperative management of patients with muscle invasive urothelial carcinoma. In particular, the question of whether neoadjuvant or adjuvant is preferred remains outstanding as does the optimal regime (ddMVAC vs gemcitabine-cisplatin), the duration of treatment, the role of radiotherapy, the utility of biomarkers, treatment options in those who are cisplatin-ineligible, and the role of immunotherapy and targeted agents. 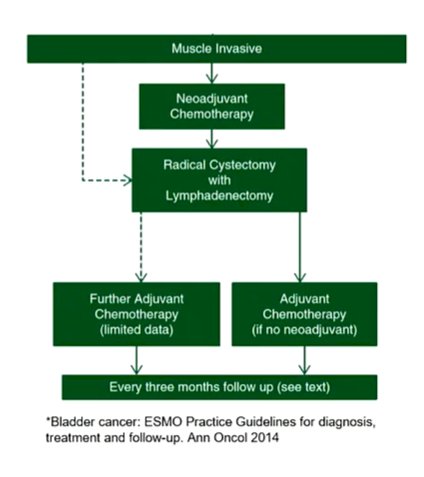 He emphasized that VESPER is a phase III trial including patients with urothelial bladder cancer who were eligible to receive cisplatin. Patients were randomized to ddMVAC or gemcitabine-cisplatin. 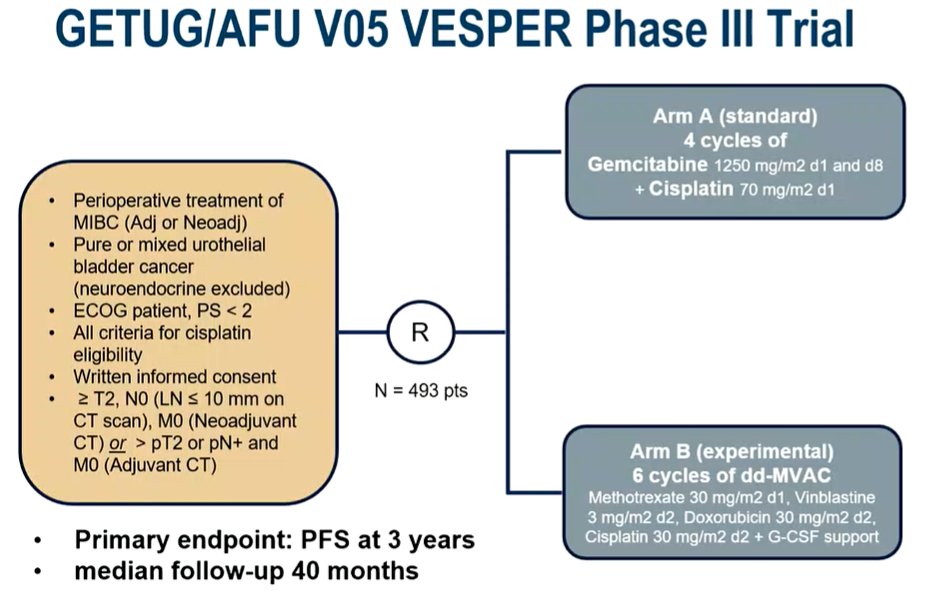 Methodologically speaking, this trial did not meet its stated primary endpoint as progression-free survival did not differ in a statistically significant fashion. However, Dr. Grande emphasized that a number of factors still support this as a practice-changing trial. He emphasized that the vast majority of patients received neoadjuvant therapy and therefore we should consider this subset of included patients preferentially. Additionally, he emphasized that three-year progression-free survival is more useful than previously utilized pathologic endpoints in the NAC setting. Additionally, he highlighted that 6 cycles of dd-MVAC were used, compared to a historical standard of four cycles, suggesting that this is an intensified treatment approach. Finally, overall survival data remain immature with a median follow-up of only 40 months. The final analysis is planned for five years of follow-up.

Dr. Grande implied that potentially the number of cycles of dd-MVAC is influential for pathological complete response rates. Compared to single-armed trials examining combinations of neoadjuvant therapy that include checkpoint inhibition, the dd-MVAC regime used in VESPER seems very similar.

The issue, as Dr. Grande raises, is the toxicity associated with dd-MVAC. Only 60% of patients randomized to the dd-MVAC arm were able to complete treatment as planned while 84% of those randomized to GC received their planned 4 cycles of therapy. However, this didn’t translate into differences in the proportion of patients who proceeded to radical cystectomy (91% vs 90%).

Dr. Grande concluded that the VESPER trial addresses three of the key questions in perioperative care for patients with MIBC. In particular, it supports dd-MVAC in the neoadjuvant setting and supports a 6 cycle regime. He raised the question of whether ongoing phase III trials assessing the role of immunotherapy in this disease space need to reconsider the control arm utilized.

Moving next to discuss the second trial, a phase II analysis of Ephrin2 inhibition in urothelial carcinoma, Dr. Grande emphasizes that the Eph receptor tyrosine and the ephrin ligands are present in cancer cells and participate in bidirectional signaling. Based on work from the TCGA, it has been known that the presence of these is associated with a poor prognosis. SEphB4-HSA is a fusion protein combining soluble EphB4 and albumin that can bind to EphinB2. Such binding blocks pathway activation. In this trial, patients with platinum-refractory disease who are naïve to immune checkpoint inhibition. Approximately two-thirds of patients were considered to express EphrinB2, based on the utilized threshold of 1%. Up to 52% of patients had a response, of whom nearly 24% achieved a complete response. Further, EphrinB2 status appears to be a predictive biomarker of response.

While these are promising data that remain to be validated, Dr. Grande highlighted that these results suggested among the highest observed response rates in this disease space and may suggest a potentially very beneficial, biomarker-directed treatment approach.

These data, however, remain to be assessed in a phase III randomized trial. In the meantime, FDA has granted breakthrough designation for this approach in the EphrinB2 positive cohort. Dr. Grande cited a word of caution, however. When first reported in 2014, phase I data of atezolizumab in PD-L1 positive disease had a response rate of 43%. Concluding his summary of this trial, Dr. Grande emphasized that there remain main important outstanding questions following the presentation of these phase II results. These include the prognostic value of EphrinB2 staining, the association between treatment activity and levels of EphrinB2 expression, potential insights into the role of chemotherapy or novel antibody-drug conjugates in EphrinB2 expressing disease, whether there is a correlation between EphrinB2 expression and PD-L1 expression, and potential next steps for this treatment regime, including across the spectrum of the disease space. To this end, these data come from an immunotherapy naïve salvage setting, a decreasingly relevant disease space given recent data from JAVELIN Bladder 100 supporting the role of switch maintenance of avelumab.