(UroToday.com) At this year’s European Society of Medical Oncology (ESMO) 2020 Virtual Congress, following a number of abstracts assessing the role of immunotherapy in advanced urothelial carcinoma, Dr. Kilian Gust provided an invited discussion regarding the future of immunotherapy in this disease with a focus on how to combine and sequence therapies.

To begin, he highlighted the current state of treatment and where we’ve come from. As most will know, platinum-based cytotoxic chemotherapy has been the standard of care based on improved survival compared to placebo. However, objective response rates are at best 50% and median overall survival is relatively poor at less than 18 months. This has driven the rationale for additional approaches. 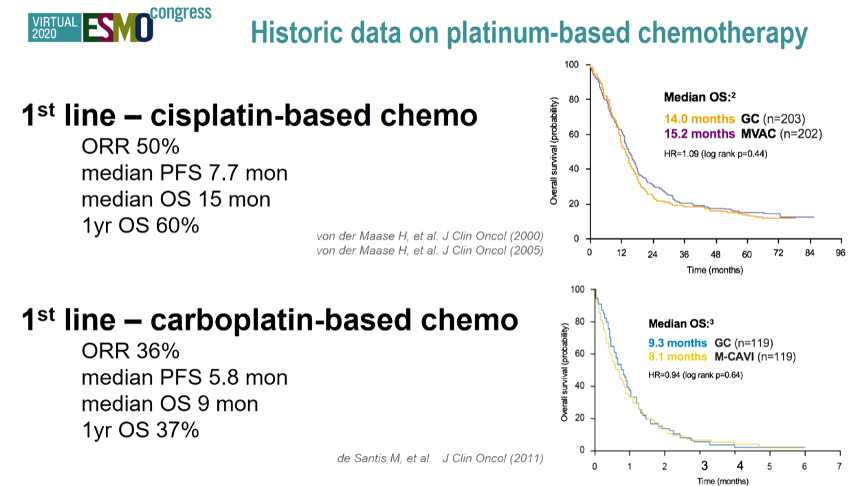 Following relatively little progress in this disease space between the late 1970s and 2000, there has been relatively rapid progress in the last five years with a number of immunotherapy and targeted therapy based approaches demonstrating clinical benefits and subsequently receiving approval.

Despite all of these advances, first line therapy for those who are cisplatin eligible remains cytotoxic chemotherapy. For patients who are not cisplatin eligible, treatment approaches depend on the PD-L1 status given a differential response to immune checkpoint blockade based on this tumor biomarker.

However, even for patients receiving guideline-concordant best care, outcomes for patients with advanced urothelial carcinoma remain poor. Thus, there is interest in augmenting response including the use of combination and sequential therapy. Conceptually, when we combine agents, we may hope for a synergistic response or at least an additive benefit, but it is worthwhile to consider that an antagonistic effect is also possible.

The rationale for combination therapy is a hoped improvement in overall survival with good tolerability.

In patients who are cisplatin-ineligible, checkpoint inhibitors have proven benefit for those with PD-L1 positive tumors. However, based on IMvigor210 and KEYNOTE-052, Dr. Gust highlighted that it is important to remember that approximately only one in five patients derive benefit from this approach. However, there is some data that the use of checkpoint inhibitors followed by cytotoxic chemotherapy may augment response to subsequent chemotherapy.

Interestingly, in the first six weeks of therapy (during the avelumab induction phase), patients in the combination therapy approach had higher rates of disease progression, a difference which could not be caught up later on. Nearly 1 in 4 patients in the combination arm progressed during this time. Thus, Dr. Gust concluded that short term upfront IO seems ineffective and can’t be recommended.

A similar early underperformance of checkpoint inhibitor monotherapy has previously been seen in the comparison of Arm B and C from the IMvigor130 trial in which patients on atezolizumab monotherapy had worse early progression compared to those receiving chemotherapy. In this trial, this was driven by patients with PD-L1 negative disease.

In summary, highlighting these data and the recently published IMvigor130 data, Dr. Gust suggested that there is little evidence of a clinically relevant benefit by using the upfront combination of chemotherapy and immunotherapy, as compared to using these in sequence as first and second-line agents. Notably, while not published, he highlighted that KEYNOTE-361 has been reported to have failed the co-primary endpoints.

In contrast with combination therapy, sequencing has been examined in JAVELIN Bladder 100 in which patients with response or stability on chemotherapy were randomized to best supportive care with or without avelumab maintenance therapy. 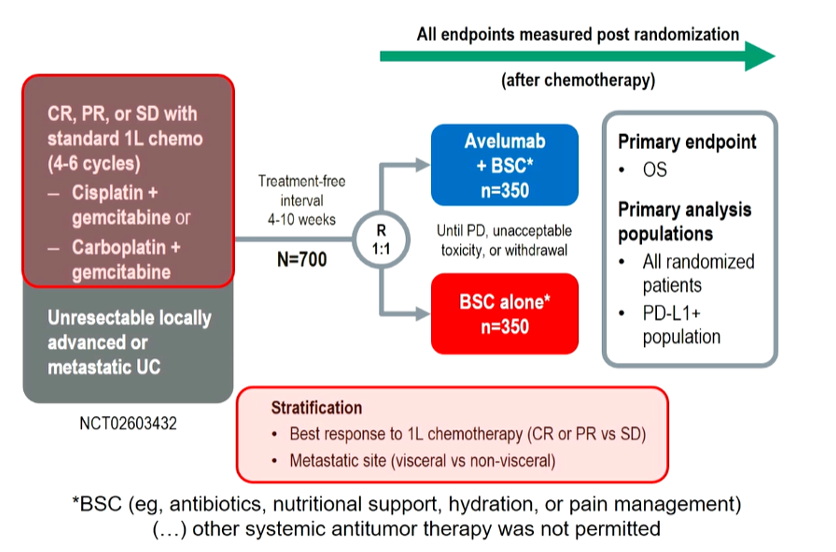 Dr. Gust highlighted that this trial was designed at a time when there were no approved checkpoint inhibitors in the second-line disease space. In contrast, today, due to results from the KEYNOTE-045 trial, pembrolizumab is approved as second-line therapy for patients following chemotherapy. In subgroup analyses of the JAVELIN Bladder 100 trial, there is a benefit to avelumab maintenance regardless of initial chemotherapy regime. However, Dr. Gust highlighted that this benefit appears to be driven by those who had a partial response or stable disease while on chemotherapy with little benefit among those with a complete response. Notably, more than half of patients who progressed in this trial received checkpoint inhibitors at the time of tumor progression. Dr. Gust pointed out that it would be interesting to compare outcomes for patients who had immediate avelumab maintenance as compared to those who received immune checkpoint inhibitors at the time of disease progression.

Finally, despite good initial outcomes, resistance to checkpoint inhibitors is common. Targets other than PD-L1/PD-1 and CTLA-4 are appealing to combat this. Many of these relate to the tumor microenvironment, rather than the tumor itself.

One such approach is to use sitravatinib. This approach, combined with nivolumab, has been assessed in advanced renal cell carcinoma in data presented at the 2020 ASCO Genitourinary Cancers Symposium. In mini-oral presentation 705, the authors assessed the combination of sitravatinib and nivolumab in patients with advanced urothelial cancer. Objective response rates of 37% and clinical benefit rate of 73% was demonstrated highlighting that this is a promising approach.