Barcelona, Spain (UroToday.com) Patients with metastatic castration-resistant prostate cancer (mCRPC) and disease progression after androgen receptor (AR) targeted therapy and taxane-based chemotherapy have a poor prognosis and few options for treatment. Preliminary evidence suggests that PARP inhibition is effective for patients with mCRPC and DNA repair defects (DRD). Niraparib is a highly selective PARP inhibitor with activity against the PARP-1 and PARP-2 DNA-repair polymerases and is approved as maintenance therapy for recurrent ovarian cancer.

GALAHAD is an ongoing open-label phase 2 study assessing niraparib (300 mg daily) in patients with mCRPC and DRD with disease progression on androgen receptor (AR) targeted therapy and taxane-based chemotherapy. DRD status was evaluated by a plasma or tissue-based test and defined as having biallelic alterations in BRCA1/2 (BRCA), ATM, FANCA, PALB2, CHEK2, BRIP1, or HDAC2. The primary endpoint was objective response rate (ORR) by RECIST 1.1 with no evidence of bone progression as per the prostate cancer working group 3 (PCWG3) criteria. Composite response rate (CRR) was defined as ORR, conversion of circulating tumor cells to < 5/7.5 mL blood, or  ≥  50% decline in PSA. 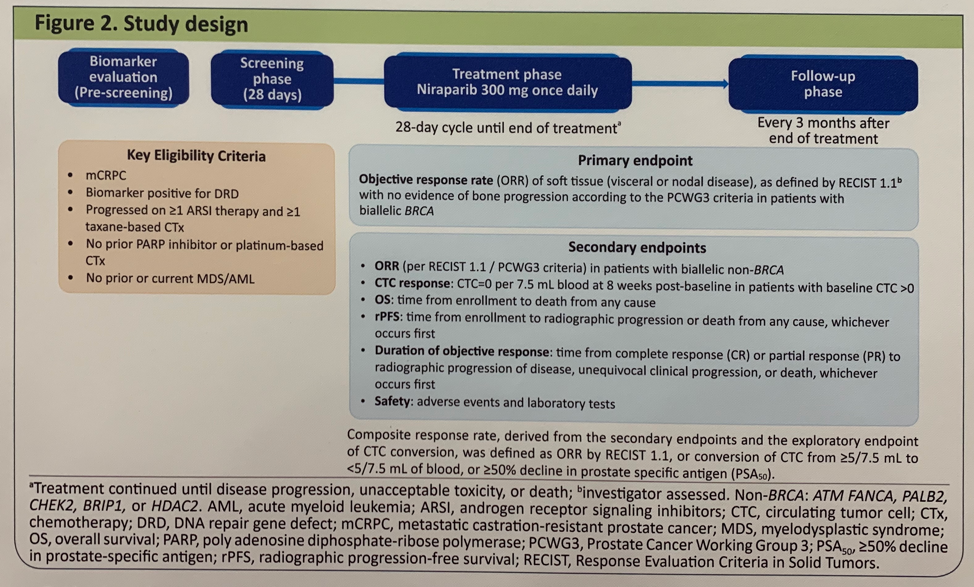 At the data cutoff for this analysis, 223 patients were screened for eligibility and 165 patients with mCRPC and DRD (BRCA or non-BRCA and mono-allelic or bi-allelic) were enrolled. This analysis focuses on the 81 patients with biallelic DRD, 46 with BRCA alterations and 35 with non-BRCA alterations. The median age in this cohort was 68, 81% were ECOG 0-1, and 47% of patients had visceral metastases.

Among mCRPC patients with bi-allelic BRCA alterations treated with niraparib, the ORR was 41% and the CRR was 63%. Median duration of response was 5.6 months and responses were ongoing in 7 of 12 patients. Radiographic progression-free survival (rPFS) of these patients was 8.2 months and overall survival (OS) was 12.6 months. In patients with non-BRCA biallelic DRD, ORR was 9% and CRR was 17%. The two non-BRCA responders both had bi-allelic alterations in FANCA. The median rPFS and OS for the bi-allelic non-BRCA DRD patients was 5.3 and 14.0 months, respectively. 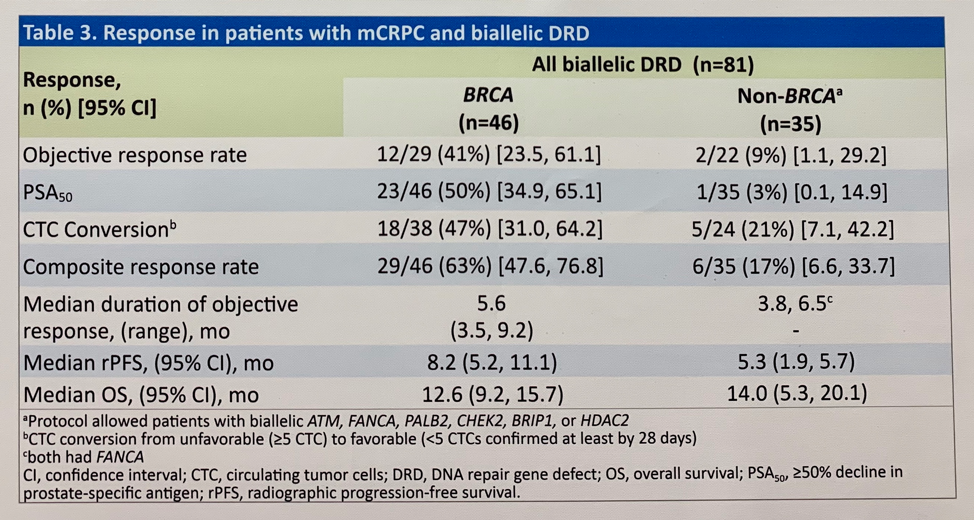 The authors then evaluated individual outcomes in the composite response rate. PSA decline of greater than 50% was observed in 50% of patients with BRCA alterations and 3% of patients with non-BRCA bi-allelic DRD. The secondary endpoint of circulating tumor cell conversion from more than 0 to 0 after 8 weeks of therapy was observed in 44% and 54% of evaluable BRCA and non-BRCA patients.

Of the 35 patients with bi-allelic DDR who responded using the CRR, 29 were BRCA patients. The median treatment duration for responders was 6.7 months (range: 2-27 months) with 8 patients having an ongoing response at the time of data collection. 66% of patients had a duration of response greater than 6 months. 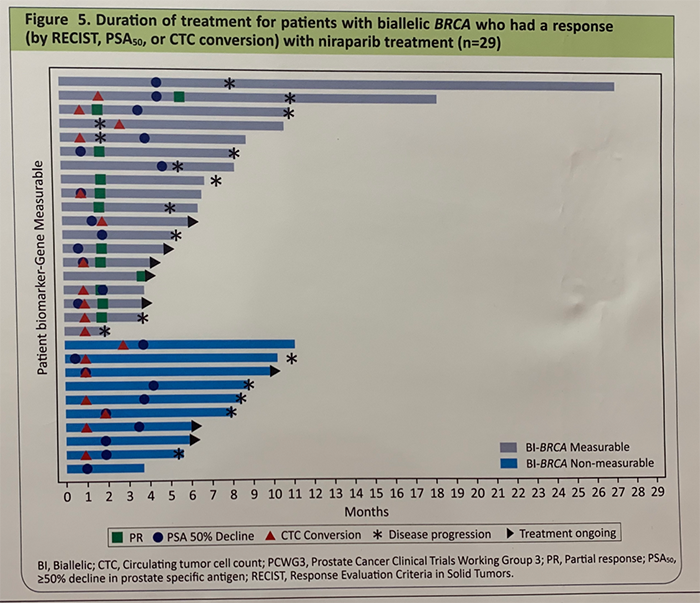 Safety was evaluated in the entire 165 patient population who received niraparib. Treatment-emergent adverse events (TEAEs) of any grade were observed in 98% of patients. The most frequent Grade 3/4 TEAEs were anemia (29%), thrombocytopenia (15%), and neutropenia (7%). TEAEs resulting in discontinuation were observed in 20% of patients. TEAEs leading to death were observed in 5% of patients (9/165). Two cases with fatal outcomes (seizure and urosepsis) were unexpected and considered by the sponsor to be related to study drug.

In conclusion, results from the pre-specified interim analysis of the GALAHAD study support that niraparib has high clinical activity in patients with bi-allelic BRCA1/2 mutations with an objective response rate of 41%, a median duration of response of 5.6 months, and a median radiographic progression-free survival of 8.2 months. The efficacy and safety of niraparib in patients with mCRPC and DRD will continue to be evaluated in ongoing trials including GALAHAD (NCT02854436), MAGNITUDE (NCT03748641), and QUEST (NCT03431350).