Barcelona, Spain (UroToday.com) First-line therapy for metastatic renal cell carcinoma (mRCC) has rapidly evolved over the past decade. First, VEGF tyrosine kinase inhibitors (TKIs), then immunotherapy (IO), demonstrated a survival benefit in the first-line treatment setting. Most recently VEGF TKI plus IO combination regimens were found to be more effective than VEGF TKI alone. In contrast, few active regimens exist for patients with progressive mRCC after treatment with VEGF TKI and/or IO. Dr. Chung-Han Lee presents results from the ENTRATA trial (NCT03163667), a randomized, double-blind Phase 2 trial designed to evaluate the efficacy and safety of telaglenastat in combination with everolimus versus placebo with everolimus in patients with advanced clear cell RCC who have been treated with at least two prior lines of systemic therapy, including at least one VEGF TKI.

Telaglenastat is a novel glutaminase inhibitor designed to block glutamine consumption in tumor cells. Tumor cells undergo metabolic shifts that result in a dependence on glutamine metabolism, catalyzed by the enzyme glutaminase. In preclinical studies, telaglenastat produced synergistic antitumor effects when used in combination with standard-of-care RCC therapies, including everolimus.

A prior Phase 1b study of telaglenastat plus everolimus in mRCC patients demonstrated a 92% disease control rate and a 5.8 month progression-free survival (PFS). The Phase 2 study presented included patients (N=69) with advanced or metastatic clear cell RCC with at least two prior lines of therapy including at least one prior VEGF TKI, and Karnofsky Performance Status  70%. Patients with treated and/or stable brain metastases were eligible. Patients who had received prior mTOR inhibitor therapy were not eligible. Patients were randomized 2:1 to telaglenastat plus everolimus versus placebo plus everolimus. The study’s primary endpoint is investigator-assessed PFS and the secondary endpoint was overall survival (OS). Additional endpoints include safety, overall response rate (ORR), and quality of life (QOL). 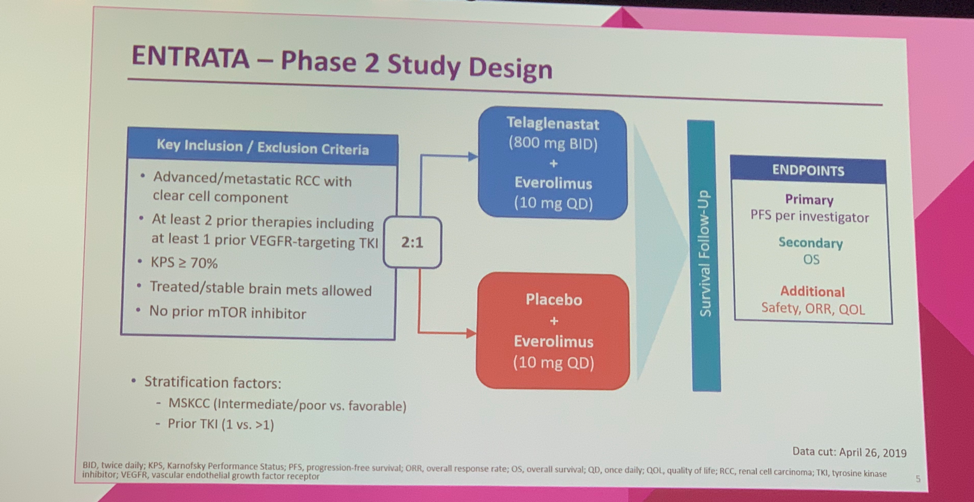 The experimental and control arm were well-balanced by Memorial Sloan Kettering Cancer Center (MSKCC) risk (70% vs 65% with intermediate/poor risk disease), prior lines of therapy (median of 3 in both groups), receipt of  2 prior VEGF TKIs (72% vs 65%), and receipt of prior IO therapy (91% vs 83%). Similar rates of liver metastases were seen in both groups (37% vs 35%). 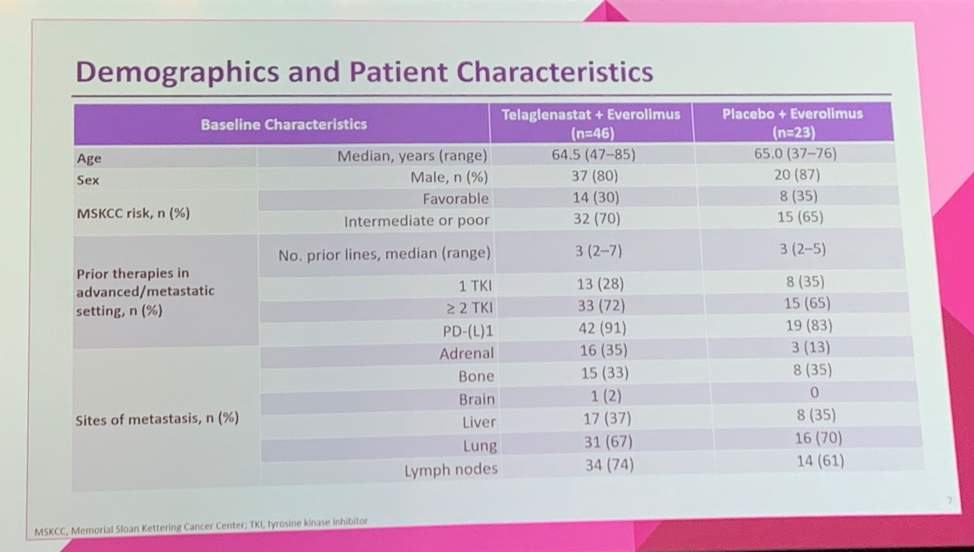 The addition of telaglenastat to everolimus improved PFS from 1.9 months to 3.8 months (HR 0.64, one-sided p = 0.079), which met the primary pre-specified cut-off of one-sided p-value < 0.2. One partial response was observed in a patient receiving telaglenastat. Otherwise, the best observed response was stable disease, which was seen in 56.5% of patients receiving telaglenastat compared to 47.8% treated with placebo. Overall survival data is not yet mature. 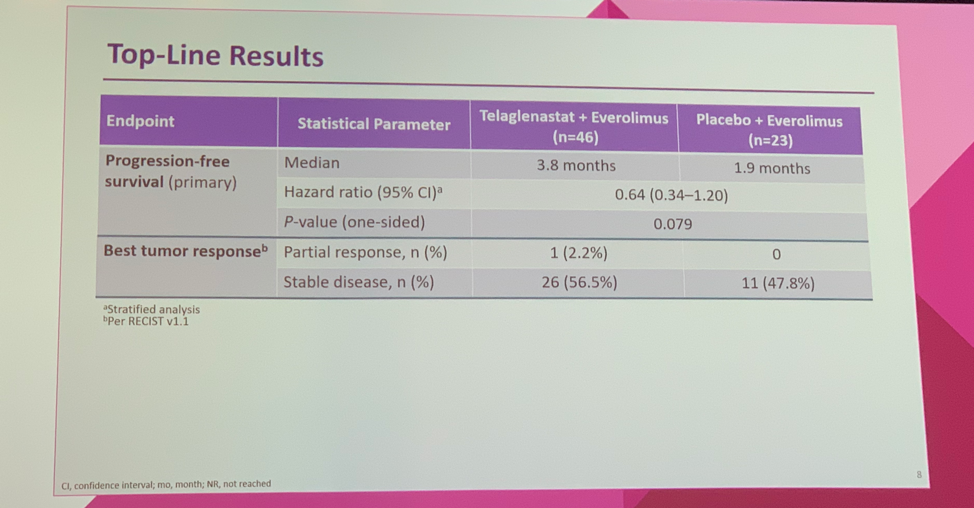 Treatment-emergent adverse events (TEAEs) were similar between the experimental and control arms. More patients receiving telaglenastat experienced a grade 3-4 TEAE (76.1% vs 56.5%), but treatment discontinuation due to TEAEs was similar in the two groups (28.3% vs 30.4%). 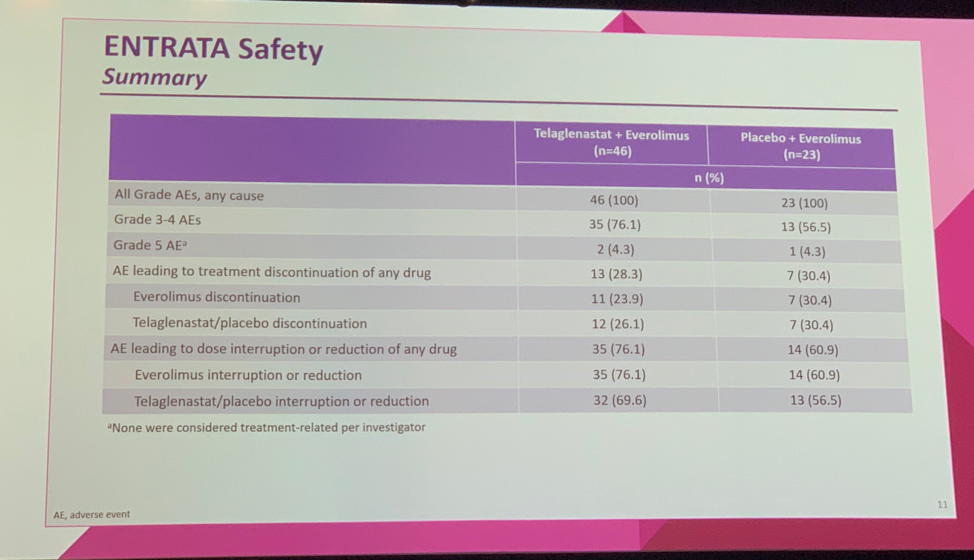 In conclusion, the addition of telaglenastat to everolimus in patients with heavily pre-treated clear cell mRCC, met the pre-specified study primary endpoint of improvement in PFS compared to placebo plus everolimus. Further, telaglenastat plus everolimus demonstrated a tolerable safety profile. Although, the PFS improvement was modest (3.8 months from 1.9 months), this data supports proof-of-concept for glutaminase inhibition as a new therapeutic strategy in mRCC. The ongoing Phase 2 CANTATA study (NCT03428217) is evaluating telaglenastat in combination with cabozantanib in the second- and third-line treatment setting.