(UroToday.com) Yasuyoshi Miyata from Japan presented results of a randomized clinical trial of intravesical mitomycin C plus cytarabine (Ara-C) versus mitomycin C for patients with non-muscle invasive bladder cancer (NMIBC) at the European Association of Urology 2021 annual meeting. Intravesical instillation of mitomycin after transurethral resection of bladder tumor is often performed to suppress the recurrence and progression in NMIBC, however, its anti-cancer effect is not satisfactory. Urine pH is closely associated with anti-cancer effects of mitomycin C, and oral sodium bicarbonate administration has been performed in intravesical mitomycin C therapy for urine alkalization. Ara-C is used as intravesical therapy, and interestingly, the pH of Ara-C solution is 8.0 ~ 9.3. Based on this, Dr. Miyata and colleagues hypothesized that the combination of Ara-C increases the anti-cancer effects of mitomycin C via urine alkalization, and they investigated this hypothesis by a randomized study in patients with NMIBC. 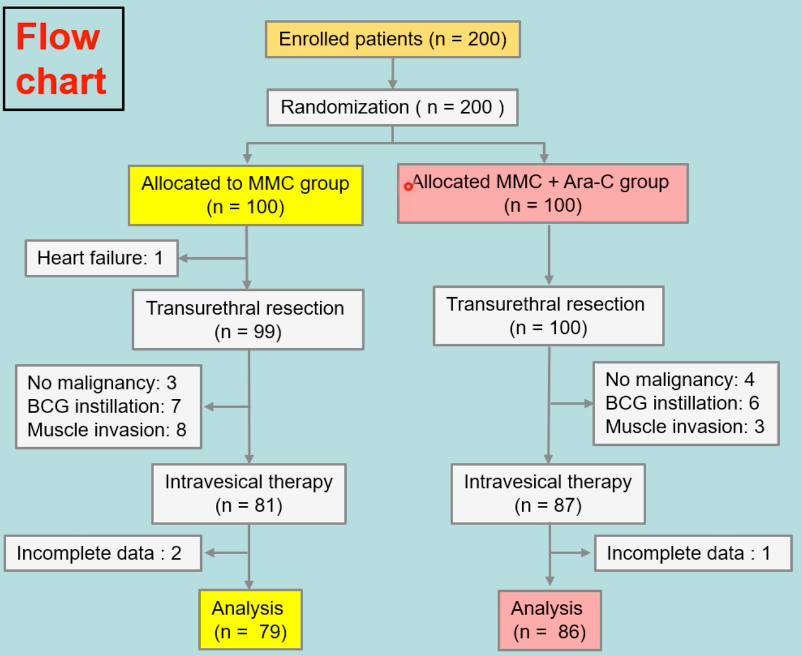 There was no difference in clinicopathological features including grade, pT stage, and frequencies of recurrent and multiple tumors between the two groups. Kaplan-Meier survival curves showed that in the entire cohort recurrence-free survival in mitomycin C + Ara-C group was significantly longer (p=0.018) compared to those in mitomycin C group. This benefit was also significant in patients with intermediate-risk disease (p=0.008), but not in high-risk patients (p=0.315):