(UroToday.com) Outcomes of immunotherapy have been the highlight of meetings over the last decade. At the 2020 European Association of Urology (EAU) Virtual Meeting, Yohann Loriot, MD, PhD, discussed novel treatment options beyond immunotherapy. As noted by Dr. Loriot, the vast majority of trials with new drugs are investigating immunotherapy, but a better understanding of the tumor biology is identifying new targets. Currently, fibroblast growth factor receptors (FGFR) inhibitors and antibody-drug conjugates are the best approaches, and as such precision-medicine should be implemented. In muscle invasive bladder cancer, several genetic alterations are potentially targetable, including FGFR3, HHRm, HER2, components of angiogenesis, and the epigenome.

FGFR3 has been the driver of urothelial cancer since 1999, including overexpression in 10% of cases, rearrangement in 20%, and activating mutations in 70%. Selective FGFR inhibitors have emerged in urothelial cancer, including BGJ398, rogaratinib, and erdafitinib. In the BLC2001 Phase II trial, 99 patients with FGFR alterations were treated with a median of five cycles of erdafitinib.1 Among these patients, 43% had received at least two previous courses of treatment, 79% had visceral metastases, and 53% had a creatinine clearance of < 60 ml/min. The rate of confirmed response to erdafitinib therapy was 40% (3% with a complete response and 37% with a partial response), and among 22 patients who had undergone previous immunotherapy, the confirmed response rate was 59%. The median duration of progression-free survival was 5.5 months, and the median duration of overall survival was 13.8 months. Treatment-related adverse events of grade 3 or higher were reported in 46% of the patients, and 13% of patients discontinued treatment because of adverse events. 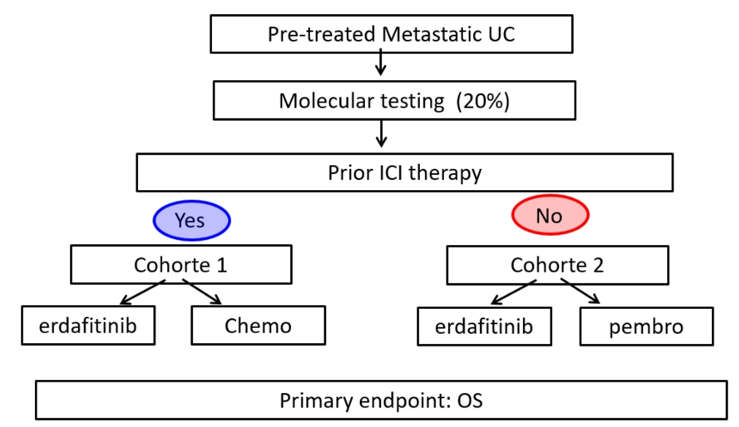 According to Dr. Loriot, the next steps for FGFR inhibitors is to (i) combine these agents with immunotherapy, (ii) investigate early stage of the disease (ie. neoadjuvant and adjuvant setting), (iii) investigate in patients with non-muscle invasive bladder cancer, and (iv) better understand the mechanisms of primary and acquired resistance. Several ongoing trials include the Phase III randomized controlled trial infigratinib versus placebo in the adjuvant setting with a primary endpoint of disease-free survival. The BLC2003 trial is a study in patients with non-muscle invasive bladder cancer, with a primary endpoint of recurrence-free survival and the following trial schema: 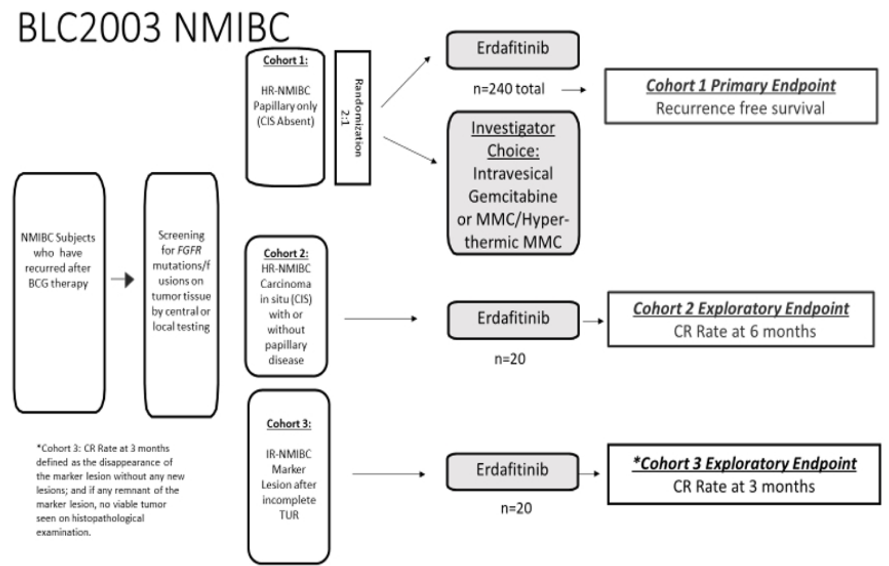 Antibody-drug conjugates allow the recycling of old chemotherapy regimens with new technologies, incorporating a linker, antibody, and payload. One such treatment is enfortumab vedotin which targets nectin 4—expressing urothelial carcinoma. In the EV-101 Phase I dose-escalation/expansion trial, 155 patients with metastatic urothelial carcinoma were treated with enfortumab vedotin.2 Among the 112 patients treated with single-agent enfortumab vedotin 1.25 mg/kg, the investigator-assessed confirmed objective response rate was 43%, and the duration of response was 7.4 months. The median overall survival was 12.3 months, and the survival rate at one year was 51.8%. The EV-301 Phase III trial randomized patients that have previously received prior platinum and immunotherapy to enfortumab vedotin or taxane or vinflunine with a primary outcome of overall survival. This trial has completed enrollment and is awaiting data maturity.

Another antibody-drug conjugate that has been evaluated in clinical trials is sacituzumab govitecan. The TROPHY-U-01 study was initially presented at ESMO 2019 and is an open-label, Phase II trial evaluating the antitumor activity of sacituzumab govitecan (10 mg/kg, days 1, 8 of 21-day cycles) in patients with metastatic urothelial carcinoma with measurable disease, ECOG performance status 0 or 1, and creatinine clearance ≥30 mL/min. There were 74% of patients that had target lesion reduction, and the objective response rate was 25% in patients with liver involvement, and the safety profile was consistent with prior reports.

Angiogenesis in urothelial carcinoma is associated with higher stage disease and poor prognosis. VEGF is a potential mediator of angiogenesis in urothelial carcinoma and preclinical models have suggested that the addition of a VEGF inhibitor to chemotherapy increases antitumor activity. However, as presented at ASCO 2019, unfortunately, bevacizumab did not improve overall survival in combination with chemotherapy.

The RANGE study randomized patients 1:1 to receive docetaxel 75 mg/m2 with ramucirumab 10 mg/kg or placebo on day 1 of a 21-day cycle until disease progression or other discontinuation criteria.3 The primary endpoint was investigator-assessed progression-free survival (PFS). Investigator assessed PFS was significantly prolonged in patients treated with ramucirumab plus docetaxel versus placebo plus docetaxel (median, 4.1 vs 2.8 months; HR, 0.757; 95% CI, 0.607-0.943). A blinded central analysis demonstrated consistent PFS results (hazard ratio [HR], 0.672; 95% confidence interval [CI], 0.536-0.842). Subgroup analyses for PFS favored ramucirumab plus docetaxel for most scenarios. The objective response rate in the first 437 ITT population was 24.5% (95%CI, 18.8-30.3) in the ramucirumab plus docetaxel arm and 14.0% (95% CI, 9.4-18.6) in the placebo plus docetaxel arm. Several ongoing trials are assessing further combinations of angiogenesis inhibitors with immunotherapy: