(UroToday.com) In anticipation of the 2021 American Urological Association (AUA) Annual Meeting which is being held, in a delayed fashion, in September, the AUA hosted a “May Kick-Off Weekend” which highlighted a variety of important topics in both benign urology and urologic oncology. Saturday morning, W. Marston Linehan led a course entitled “Diagnosis and Management of Localized, Locally Advanced and Advanced Kidney Cancer” along with Ramaprasad Srinivasan, David McDermott, and Mark Ball.

Building on the presentations from Dr. Linehan regarding the genetic causes of renal cell carcinoma (RCC) and from Dr. McDermott regarding current and future direction for immunotherapy in RCC, Dr. Srinivasan presented on challenges and emerging strategies for systemic therapy in kidney cancer.

He began by highlighting data, presented previously by Dr. McDermott, that demonstrates the combination approach (either using combination IO-IO therapy or combination IO-TKI therapy) is the new first-line standard of care for patients with advanced clear cell RCC. However, within increasing utilization of combination approaches in the first-line setting, Dr. Srinivasan emphasized that we don’t have good data on how to manage patients who progress. Many of our current second and third-line choices are informed based on patients who progressed following anti-angiogenic therapy. Thus, novel treatment approaches are needed and he emphasized that a return to the mechanisms of renal cell carcinogenesis may allow identification of new targets. 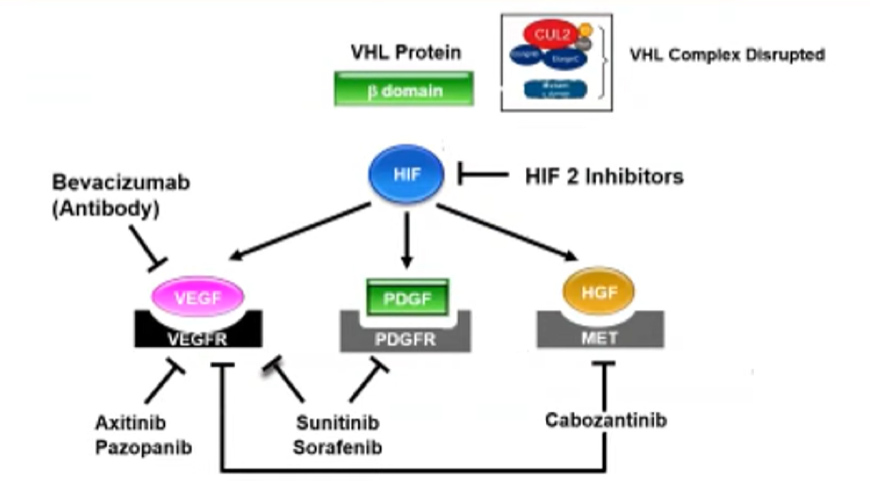 In particular, he highlighted the importance of our understanding of the cellular response to hypoxia. In clear cell RCC, there is data regarding the importance, and clinical utility, of targeting HIF-2α. Dr. Srinivasan emphasized that we may want to target HIF-2alpha directly rather than its downstream consequences. For many years, this has been difficult. However, recently, a small pocket identified which could be blocked using small molecules.

The first generation HIF-2α inhibitor PT2385 was tested in a phase 1 dose-escalation study. White clinical responses were promising (CR in 2%, PR in 12%, and SD in 52%), there was high variability in drug levels between patients and highly variable pharmacokinetics between patients. Patients who have higher levels appeared to derive greater clinical benefit. Thus, further work sought to identify a second generation agent which would provide a more consistent response. The second-generation agent, PT2977 / MK-5482 / belzutifan was subsequently tested in a phase I/II study which demonstrated promising response rates and a reasonably long duration of response among responders. Perhaps most importantly, particularly among patients who have already received a number of prior lines of therapy, belzutifan was well tolerated. Anemia was the most common, and expected, adverse event though it could be well managed with EPO replacement. Notably, there was no cardiovascular toxicity. Overall, the safety profile of belzutifan compared favorably with currently utilized VEGF-TKIs.

This approach is now under study in a phase III study of patients with advanced, pre-treated clear cell RCC, compared to everolimus. 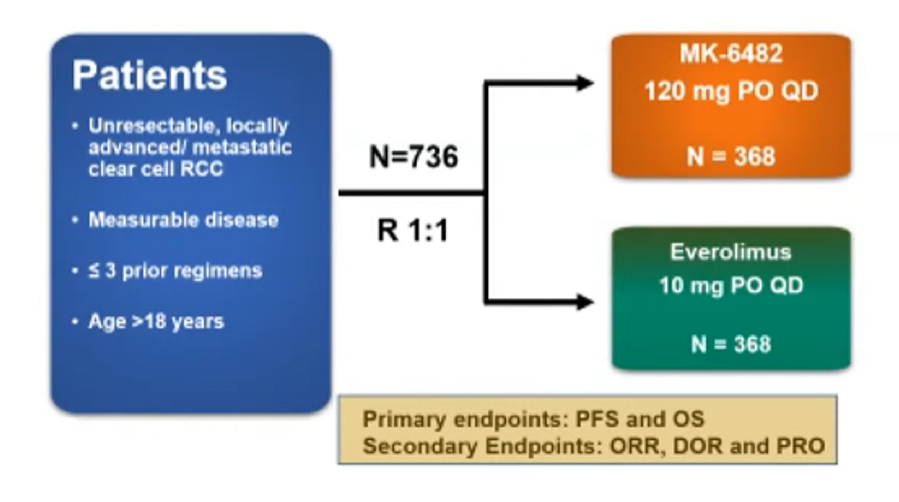 As highlighted previously in Dr. Linehan’s talk, in ccRCC, advances for all patients have been derived from study of patients with VHL. However, ccRCC is not the only clinically relevant manifestation. To date, local control of these other manifestations has been undertaken using surgery and ablative approaches without evidence-based systemic therapy for VHL-specific approaches. As a result, the management of systemic therapy is derived from the standard of care based on sporadic tumors. In contrast, a systemic therapy approach offers the potential to avoid repeated procedures and ongoing risk of recurrence or metachronous development of tumors. VEGF targeting agents have modest activity and prohibitive toxicity. Thus, these approaches are not widely used. However, interest in using HIF-2alpha inhibitors such as belzutifan to target these extra-renal manifestations of VHL.

Preliminary data which has not yet been published suggested a confirmed response of 36% with a further 11-12% unconfirmed response. Nearly all patients had a decrease in tumor size based on the independent central review, with a significant inflection from a relatively rapid tumor group prior to treatment initiation.

In addition to this shrinkage of tumors, treatment effect was also seen in other extra-renal sites, including pancreatic lesions and CNS hemangioblastomas with objective response rates of 64% and 30%, respectively. CNS hemangioblastomas are associated with significant morbidity both from the condition itself and the necessary surgical intervention. Thus, systemic therapy which may control these lesions could dramatically change the care of these patients.

As of July 2020, belzutifan has received FDA Breakthrough Therapy Designation and Orphan Drug Status. Subsequently, in March 2021, the FDA granted Priority Review for the belzutifan NDA in patients with VHL.

Dr. Srinivasan then transitioned to discussing advanced papillary RCC, in which there are very few effective treatments, despite it being the second most common histologic subtype of RCC. In advanced disease, patients with papillary disease have poorer survival outcomes compared to those with ccRCC. Recently, cohort B of the Keynote-427 trial demonstrated promise for pembrolizumab in non-clear cell RCC. Further, the SWOG 1500/PAPMET trial provided a randomized assessment of four TKIs in papillary disease. Dr. Srinivasan emphasized that, while cabozantinib demonstrated superiority to the standard of care sunitinib, overall responses were generally poor with a median PFS of 9 months and an objective response rate of 23%.

Further, he noted that there is significant heterogeneity within the category of papillary RCC (including type 1 vs type 2). Thus, a better understanding the underlying etiology of each of these is likely to offer novel treatment approaches that we may expect would have better response. 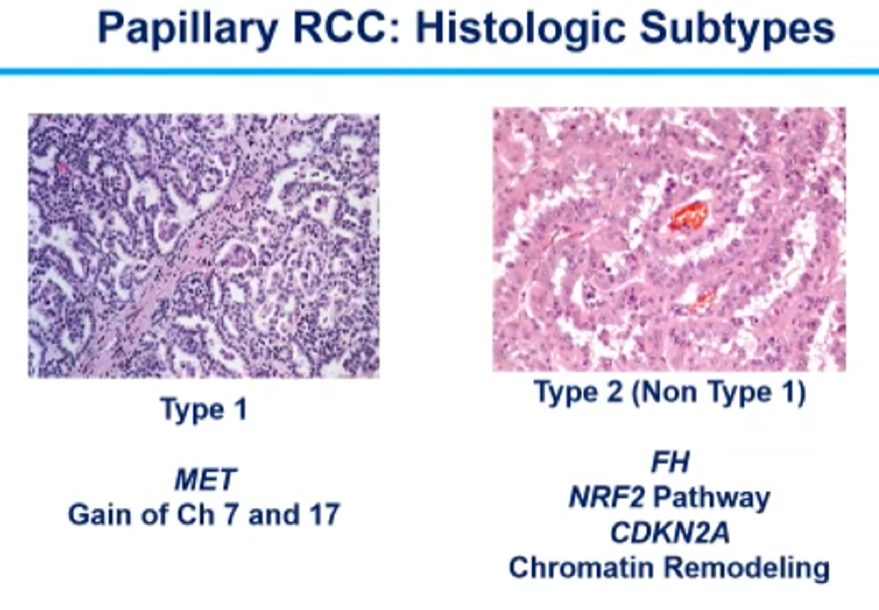 Dr. Srinivasan highlighted that activating mutations in MET are responsible for hereditary type I papillary RCC and may also be found in sporadic tumors. In the phase II trial of the dual MET/VEGFR2 inhibitor foretinib, patients who had germline MET mutations had substantially better objective response rates (50%) than those with other MET alterations (0-5%).

A targeted approach has also been tested for patients with type 2 papillary RCC whether sporadic or associated with Hereditary Leiomyomatosis Renal Cell Carcinoma (HLRCC). This approach, including bevacizumab and erlotinib, was designed to target metabolic consequences of FH loss.

Dr. Srinivasan emphasized that we need to develop new strategies to complement existing therapies. Picking the right patients and matching targets to targeted agents will improve outcomes. In VHL-deficient RCC, he emphasized that HIF-2α is a promising target with the potential to shift the paradigm for patients with VHL. In papillary RCC, it’s important to understand the heterogeneity within this disease and target therapies based on subset-specific mechanisms.