(UroToday.com) The bladder cancer non-invasive session at the American Urological Association, (AUA) included a presentation by Dr. Anirban Mitra discussing the impact of anti-adenoviral antibody levels for predicting nadofaragene firadenovec response in BCG-unresponsive non-muscle invasive bladder cancer (NMIBC). Nadofaragene firadenovec is a recombinant adenoviral vector-based intravesical therapeutic that delivers a copy of human IFNa2b gene to urothelial cells. The recent phase 3 trial in high-grade BCG-unresponsive NMIBC reported a 60% complete response rate in the efficacy population at 3 months, and this response was maintained in 51% of patients at 12 months.1 This analysis examined the value of anti-adenoviral antibody level as a predictor of therapeutic response in patients receiving nadofaragene firadenovec.

There were 157 BCG-unresponsive NMIBC patients treated in the single-arm, open-label phase 3 Instillidrin trial. For treatment, 75 mL of nadofaragene firadenovec (3 x 1011 vp/mL) was instilled intravesically for 1 hour once every 3 months for up to four doses, with additional dosing at the investigator's discretion. Serum antibody levels were assessed 1-24 hours pretreatment at baseline, and 3, 6, 9 and 12 months or at study-withdrawal visit. Assays were performed at laboratories certified per Clinical Laboratory Improvement Amendments (CLIA) standards. Fold change was calculated as the ratio of on-treatment to baseline antibody level. The final treatment response was assessed at 12 months or time of disease recurrence, whichever was earlier.

There were 91 (58%) patients in the treatment population that had evaluable antibody titers and were included in the analysis. Among those included, 57 (63%) patients had carcinoma in situ with or without Ta or T1 (CIS ± Ta/T1) disease. Overall, 47 (52%) patients were high-grade recurrence-free at month 12. On-treatment antibody titers for all patients were at or higher than baseline levels and baseline titers were not associated with response. On-treatment titers >800 were seen in 89% of responders and 59% of nonresponders (p=0.001). 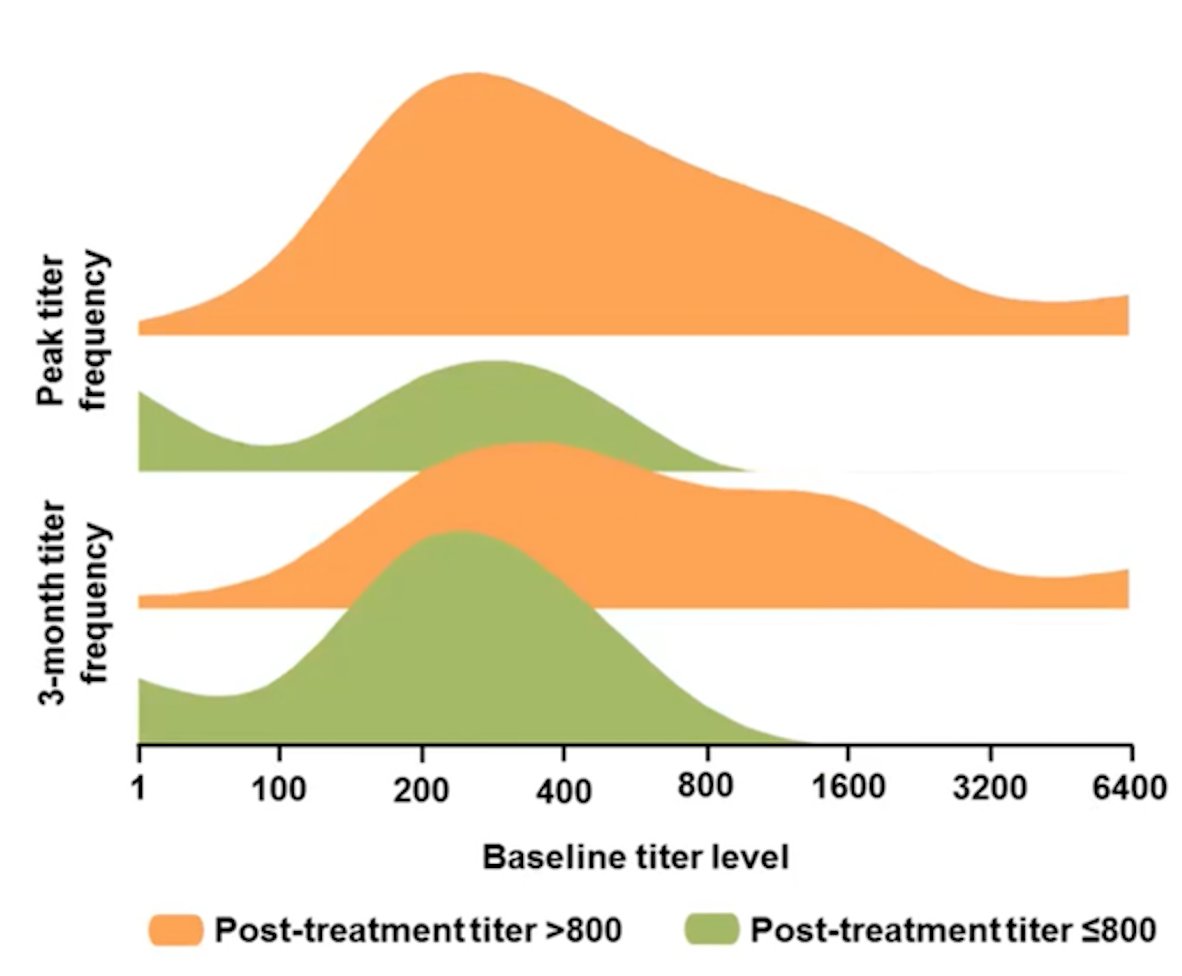 The sensitivity of this test for detecting responders was 89% with a negative predictive value of 78%. On-treatment antibody fold change >8 from baseline was seen in 51% of responders and 27% of non-responders (p=0.02). 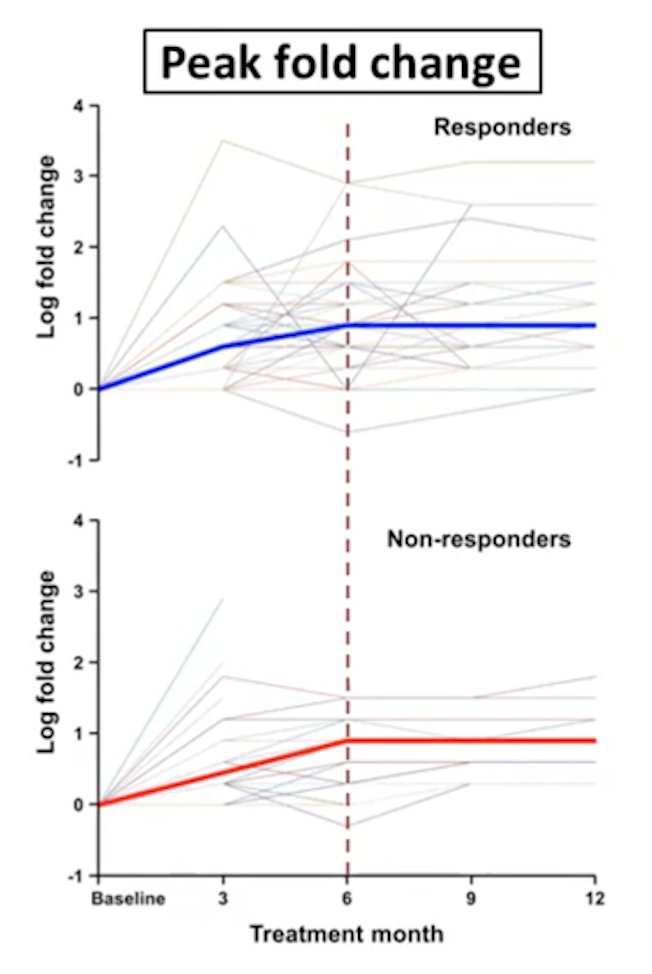 Elevated on-treatment antibody titers and fold change from baseline were noted in 47% of responders and 18% of non-responders (p=0.004). The specificity of the combined test for detecting responders was 82% with a positive predictive value of 73%. 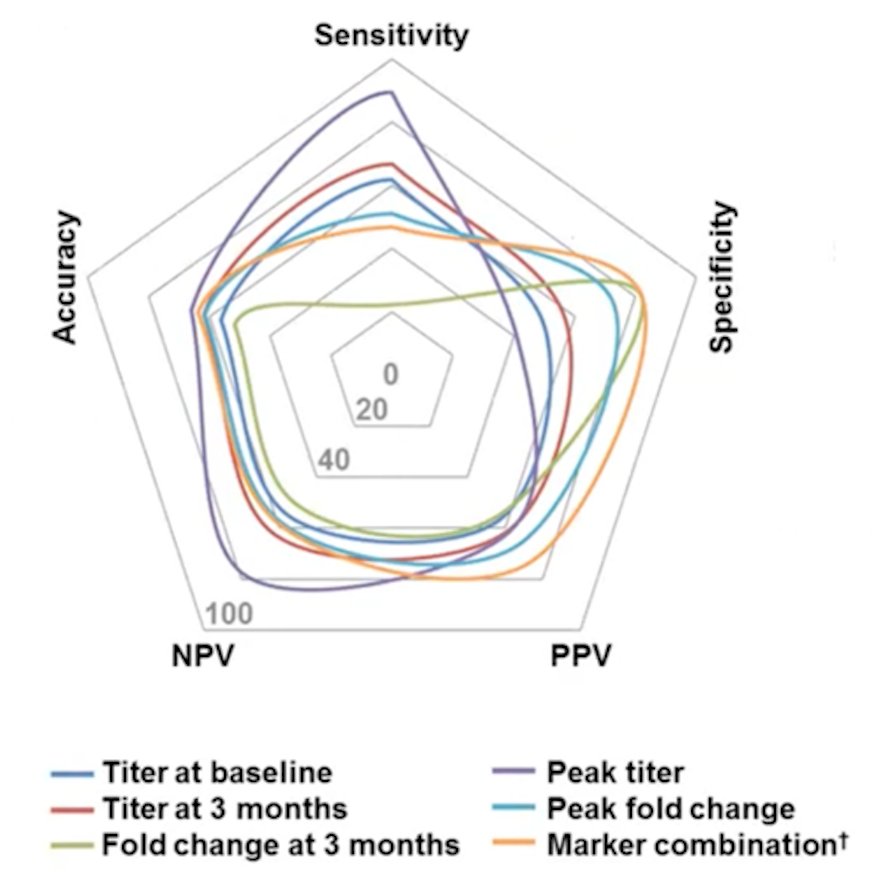 Additionally, these findings were also corroborated in the CIS ± Ta/T1 sub-cohort of patients.