(UroToday.com) Androgen deprivation therapy (ADT) is the mainstay of treatment for advanced prostate cancer. In recent years there has been a rapid increase in therapeutic options for advanced cancers. Many drugs have been approved for the same setting (docetaxel, enzalutamide, abiraterone, darolutamide, apalutamide, and olaparib). Despite the plethora of drugs that have been approved, there has been minimal head to head data assessing clinical efficacy and toxicity profile.

It is known that any hormonal deprivation induces a hypogonadal state with many side effects, including cardiac risk. Cardiac disease is the leading non-cancer cause of death in men with prostate cancer. There are some data suggesting the GnRH agonists and antagonists may have different cardiac risk profiles.1

It currently remains unclear whether abiraterone or enzalutamide confer a similar cardiac risk.

Pharmacovigilance is the collection, detection, assessment, and monitoring of adverse events related to pharmaceutical products.

Vigibase is a World Health Organization's (WHO) global Individual Case Safety Report database that contains individual case safety reports (ICSRs) submitted by the participating member states enrolled under WHO's international drug monitoring program. It is the single largest drug safety data repository in the world. In 2007 it had 3.8 million individual case safety reports, and in 2014 it increased to 10 million, with over 150,000 drug products monitored in 136 countries.

In the presented study, the authors examined the rates of cardiac events for both enzalutamide and abiraterone (including myocardial infarction, heart failure, carditis, valvular dysfunction, arrhythmias, and others). Table 1 demonstrates the number of patients with the various cardiac events that were analyzed. 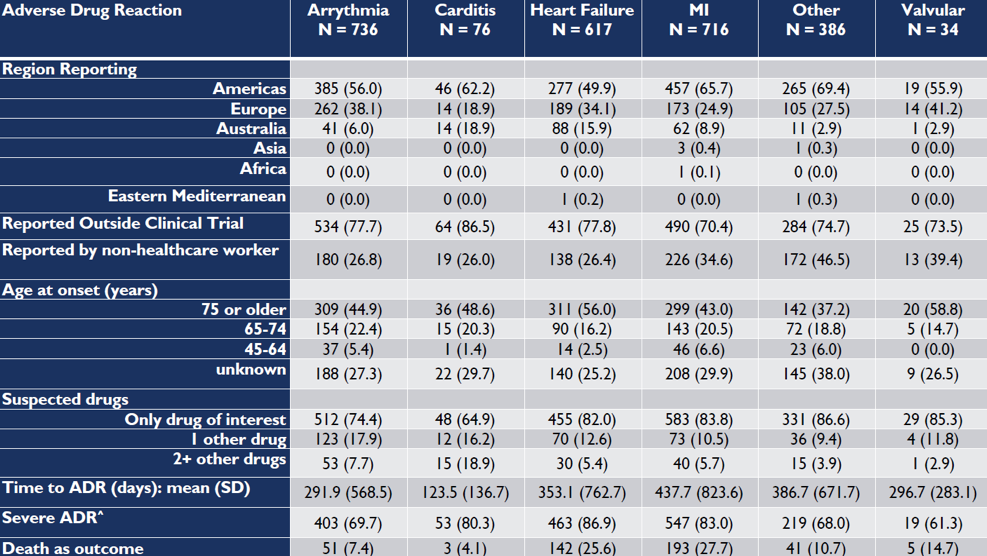 The authors report 2433 cardiac adverse events that were identified with most reported outside a trial (77%). Most patients were older than 65 (66%), and the most frequent events were myocardial infarction and heart failure, which were also the most fatal. The cumulative incidence of time to adverse drug reaction from initiation to treatment can be shown in Figure 1.

The summarized results demonstrating the association of the various drugs to cardiovascular events are shown in Figure 2.

Figure 2 – Association of the various drugs to cardiovascular events: 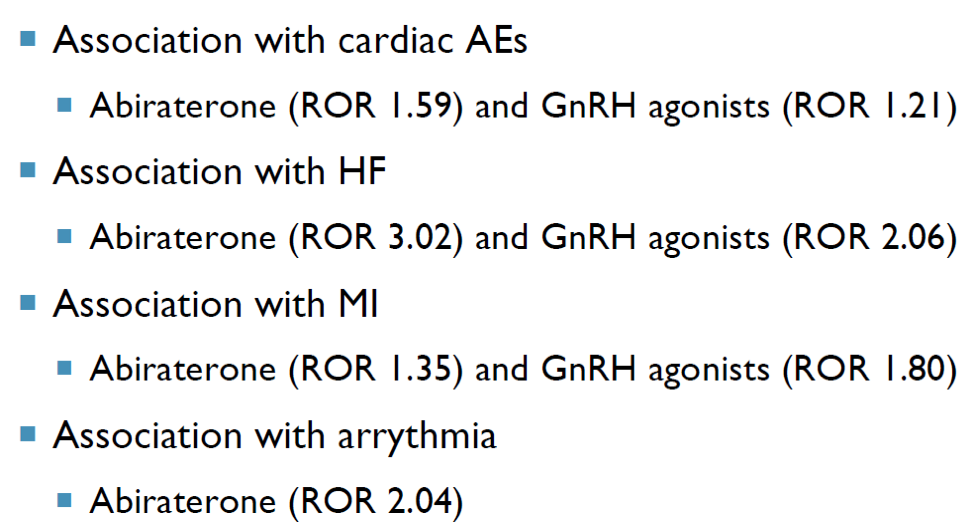 These results show an increased cardiac risk with abiraterone and GnRH agonists, which is in line with previous data. In contrast, enzalutamide had no disproportional association with any cardiac adverse events.

This interesting study has several limitations, including the fact that Vigibase reports data from various different sources, resulting in the probability that an adverse event is drug-related not being similar in all cases. Furthermore, medication sequencing may play an undetected role, and that not all adverse events are capture by Vigibase.

Despite these limitations, the authors concluded that there is an increased risk for cardiac events in patients using GnRH agonists and abiraterone, but not enzalutamide.