San Francisco, CA (UroToday.com) The optimal sequence of cytoreductive nephrectomy (CN) and targeted therapy (TT) for patients with metastatic renal cell carcinoma (mRCC) remains to be established. The authors presented a study comparing overall survival (OS) between patients with mRCC receiving initial CN with or without subsequent TT versus initial TT with or without subsequent CN.

For this study, the National Cancer Database was used to identify patients diagnosed between 2006-2013 with RCC that was metastatic at diagnosis who received either CN, TT, or both. Those with other prior cancer history were excluded. The cumulative incidence of receiving TT after CN and CN after TT were evaluated, with death prior to second treatment as a competing risk. To account for treatment selection bias, inverse probability of treatment weighting (IPTW) was performed based on the propensity to receive initial CN or TT. OS from diagnosis was compared using Cox regression.

The cohort included 15,068 patients, of whom 6,731 underwent initial CN and 8,337 underwent initial TT. At 6 months from diagnosis, the probability of receiving TT after CN was 48.0%, with 15.3% of patients having died after initial CN prior to receiving TT. Meanwhile, the probability at 6 months of undergoing CN after initial TT was 4.7%, with 44.9% of this group having died prior to undergoing CN. In the IPTW analysis, baseline characteristics were balanced (standardized difference <0.1). Initial CN was associated with improved OS compared to initial TT (median 16.5 vs 9.2 months; HR 0.61; 95%CI 0.59-0.64; p<0.001). Findings were similar in all sensitivity analyses (propensity score matching and adjustment; regression adjustment;

Major limitations of this study include its observational design, unmeasured differences between groups, and incomplete capture of subsequent therapies beyond 6 months.

The authors conclude that Initial CN was associated with improved OS versus initial TT in this national dataset. However, initial CN was also associated with delays in, and even death prior to, receipt of TT. As such, while the survival data here support initial CN in appropriate surgical candidates, continued efforts to develop the optimal multimodal approach to these patients are warranted. 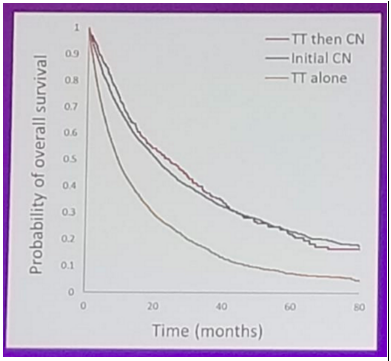