(UroToday.com) The 2022 American Society for Radiation Oncology (ASTRO) Annual Meeting held in San Antonio, TX between October 23rd and 26th, 2022 was host to a State of the Art session for the selection and treatment of localized prostate cancer. Dr. Amar Kishan presented the primary endpoint analysis of MIRAGE: a phase III randomized trial of MRI-guided versus CT-guided stereotactic body radiotherapy for prostate cancer.

The PTV accounts for possible uncertainties in beam alignment, patient positioning, organ motion, and organ deformation. In the context of prostate SBRT, the major contributor to the PTV is prostate motion. The margin for motion is estimated to be at least 3 mm in the anteroposterior and the S/I dimensions with volumetric modulated arc therapy (VMAT). Setup uncertainties can persist due to the intrinsic nature of treatment, but also due to residual error introduced by an MRI-CT fusion.

As such the study hypothesis was that aggressive margin reduction from 4 to 2 mm using MR-guided radiotherapy technology would reduce acute grade 2+ GU toxicity from 29% to 14%. An estimated sample size of 300 patients would have a power of 83.7% to detect this difference using a one-sided z-test at a p-value threshold of 0.025. An interim analysis was stipulated after 100 patients were eligible. The Pocock alpha-spending function was used to divide the alpha allowance between the interim and final analyses.

With regards to treatment volumes and parameters, high-dose CTV to the prostate and proximal 1 cm of the seminal vesicle was performed with a 2 mm margin (MRI-guided) or 4 mm margin (CT-guided) at a dose of 40 Gy. ADT (including 2nd generation agents), pelvic nodal radiotherapy, hydrogel placement, and boosting dominant nodules was allowed per investigator discretion, as detailed below:

Next, Dr. Kishan detailed the IGRT and planning details for each arm:

The study CONSORT diagram is demonstrated below, with 178 patients initially randomized. Two patients (1 in each arm) unfortunately passed away from COVID-related pneumonitis and were not evaluable for study purposes. 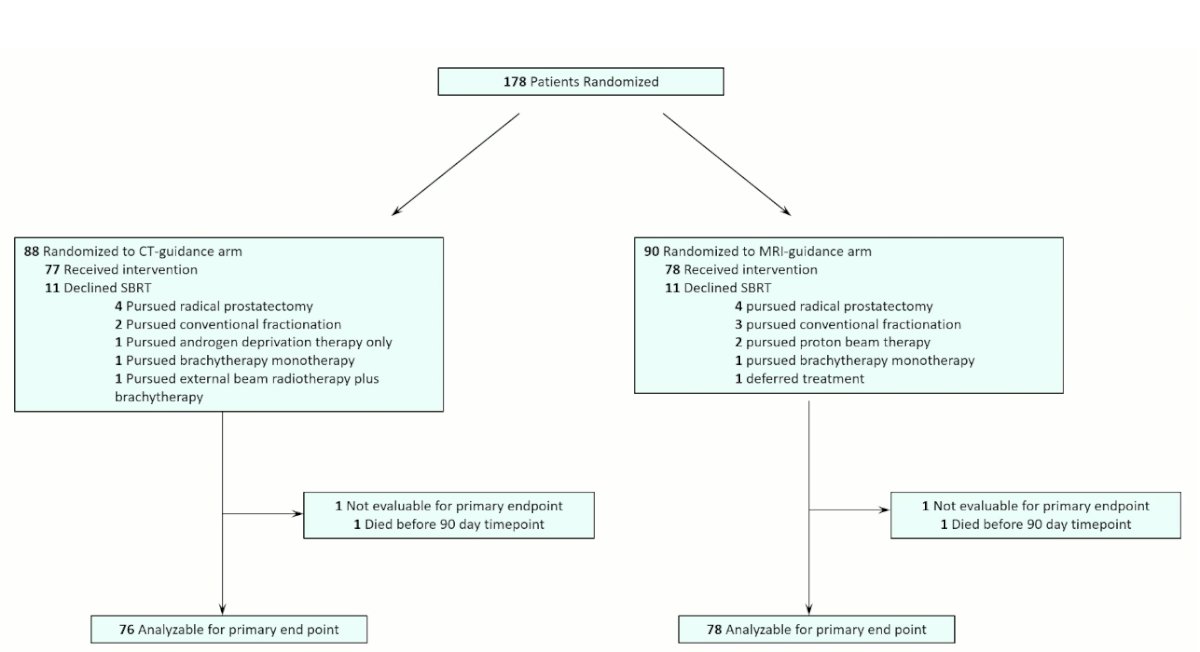 Baseline patient characteristics are demonstrated below. Of note, more than 80% of patients in each arm had either unfavorable intermediate-, high-, or very high-risk prostate cancer. ADT was used in in about 70% of patients, nodal radiation in about 25%, and GTV boost also in about 25% of patients. 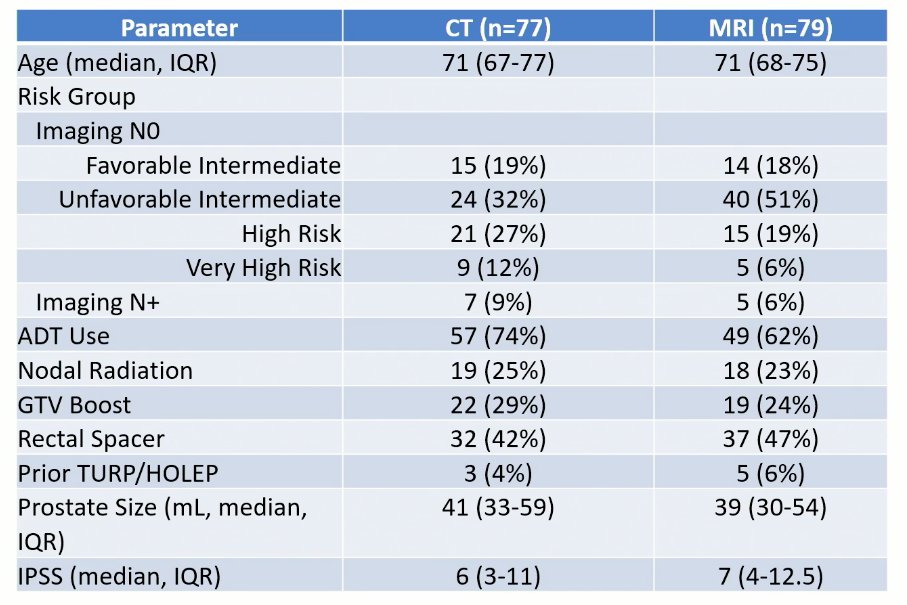 Results of the primary outcome demonstrated that acute grade 2+ GU toxicity was significantly lower in the MRI-guided group (24.4% versus 43.4%, p=0.01). The majority of this difference was driven by urinary frequency and retention adverse events. Notably, the rate of acute grade 2+ GI toxicity was also significantly lower in the MR-guided arm (0% versus 10.5%, p=0.003). The majority of these differences were driven by increased diarrhea and proctitis in the CT-guided arm. Multivariable analysis adjusting for key factors including IPSS, gland volume, and spacer use demonstrated that the MR-guided treatment arm remained associated with a 60% reduction in the odds of grade 2+ GU toxicity (OR: 0.40, 95% CI: 0.19 – 0.84). 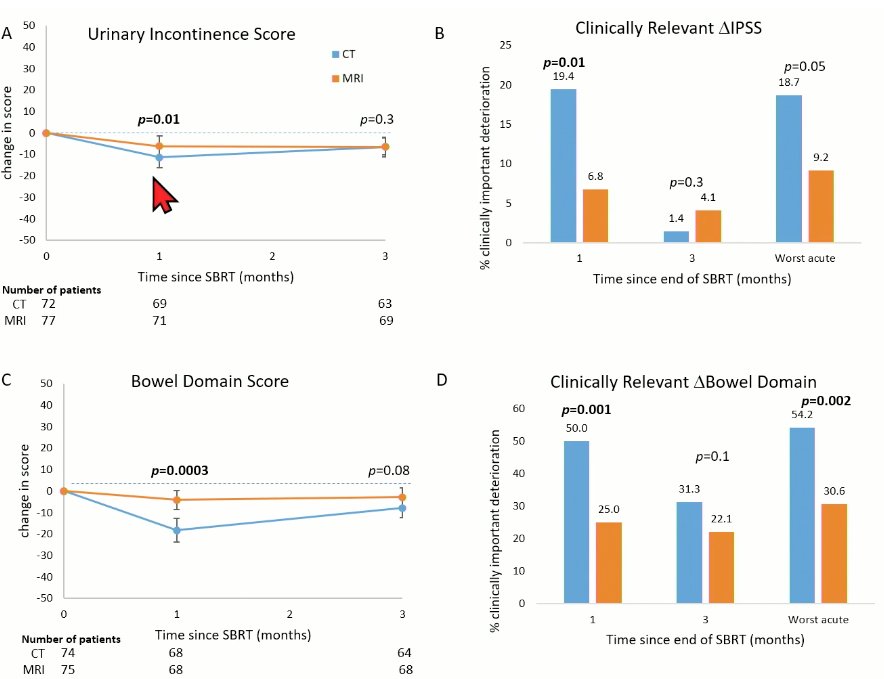