(UroToday.com) The 2021 American Society for Radiation Oncology (ASTRO) Hybrid Annual Meeting’s included a session on biomarkers and salvage radiotherapy and a discussant presentation of five presentations in this session by Dr. Brian Baumann. With regards to organizing these five presentations into clinical context, Dr. Baumann provided the following summary outline:

Androgen receptor signaling is central to the biology of castration-sensitive prostate cancer and ADT therapy. Certain splice variants are associated with resistance to ADT in metastatic castration-resistant prostate cancer, including AR-V7, which also seems to be associated with DNA repair. The hypothesis of the Konieczkowski et al. study was: do AR variants correlate with poor response to salvage radiotherapy + ADT in the post-operative setting? The cohort for this study included 46 patients retrospectively analyzed with comprehensive AR-V interrogation by ultra-deep sequencing. Ultimately, AR-V7 was the only AR variant associated with oncologic outcomes: 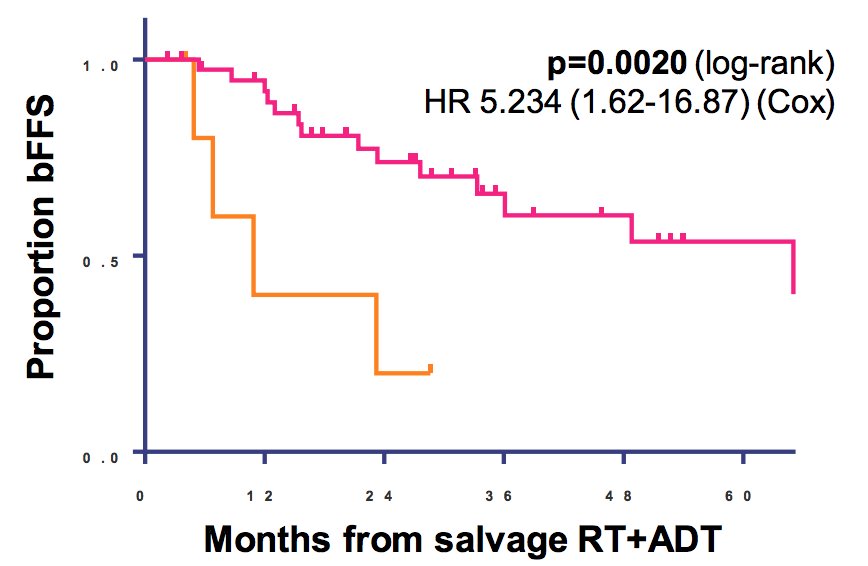 In the SAKK 09/10 trial, genomic classification was a pre-specific endpoint. This was a multicenter, randomized phase 3 trial performed in 24 centers in Switzerland, Germany, and Belgium. Patients with biochemical progression (PSA >0.1 to 2 ng/mL at randomization) were randomized to 64 Gy versus 70 Gy to the prostate bed; no ADT or pelvic nodal radiotherapy was used. The results of this study were recently published in European Urology [1] and there was no difference in failure from biochemical progression between the two groups after six years of follow-up. The pre-specified statistical analysis was to investigate the impact of genomic classifiers on oncologic outcomes prior to analysis of overall study results. Central review of the pathology was associated with a high rate of passing quality control (>97%), and 226 of 350 patients had genomic classifier data for analysis. The primary endpoint for this particular analysis was freedom from biochemical progression. Dr. Baumann notes that the findings in SAKK 09/10 for biochemical progression were similar to the RTOG 9601 trial [2] with respect to overall survival when patients were stratified by high versus low/intermediate genomic classifier risk:

Additionally, the exploratory analysis on the genomic classifier and pre-salvage PSA with regards to freedom from biochemical progression showed important outcome differentiation when stratified by PSA <= vs > 0.5 ng/mL at randomization:

The phase I trial of neoadjuvant stereotactic body radiotherapy presented by Hammer et al. had a primary objective of determining the maximum tolerated dose of neoadjuvant stereotactic body radiotherapy that leads to <28% of patients experiencing a dose-limiting toxicity 30 days post-radical prostatectomy. This included a population of high-risk or clinically N+ disease patients who were candidates for surgery. Patients were treated with 25 Gy/5 fractions to the pelvic nodes and either 30 Gy in 5 fractions or 35 Gy in 5 fractions to the prostate and seminal vesicles. Ultimately, this trial was stopped early due to unacceptably high toxicity after 16 patients were enrolled. There were several severe complications including grade 3 urinary tract obstruction in 25% of patients, grade 3 urinary fistula in 25% of patients, two patients (13%) requiring a cystectomy and urinary diversion, and two patients (13%) undergoing incision of bladder neck contracture.

Dr. Baumann notes that the authors should be commended for evaluating a novel use of radiation with pre-op stereotactic body radiotherapy for patients with high-risk disease. Importantly, the target volume is smaller in the pre-op setting and pre-op radiotherapy can improve rates of negative margins. Unfortunately, the high dose of stereotactic body radiotherapy (30-35 Gy) was too toxic, but pre-op radiotherapy is worth exploring further. Future phase I/II trials should focus on toxicity mitigation, such as lowering the dose (ie. 25 Gy in 5 fractions), using a more fractionated scheme, or employing treatment planning techniques to reduce toxicity (ie. urethral sparing, online adaptive radiotherapy, proton therapy, etc).

Dr. Baumann notes that this is an impactful study, which validates gene expression biomarkers using prospective randomized trial data and found an independent association with the genomic classifier score and risk of distant metastasis, prostate cancer specific mortality, and overall survival. This tool can improve risk stratification and aid in personalized treatment decisions for patients. Importantly, genomic classifier testing is now included in the NCCN guidelines and this study paves the way for using genomic classifier testing as a stratification factor in randomized prostate cancer clinical trials. Dr. Baumann encourages everyone to open NRG-GU009/PREDICT-RT (NCT 04513717) at their center:

In Dr. Baumann’s practice, he routinely obtains genomic classifier testing for all prostate cancer patients, and his preference is to enroll high-risk patients on the NRG GU009 trial. For high-risk patients who are not eligible or decline the study, he uses the Decipher test for shared decision-making for patients already on treatment who express reservations about continuing ADT and to help patients decide between 1.5 years versus 2 years of ADT.

In the study by Ma et al., they reported results testing a nomogram they developed using 200 patients with high-risk prostate cancer who underwent PSMA PET/CT scan who were cN0M0 on conventional imaging. The objective of this study was to determine the prognostic performance of this PSMA nomogram for predicting clinical outcomes, such as biochemical recurrence, distant metastasis, prostate cancer specific mortality, and overall survival, as well as to compare the prognostic performance of the PSMA nomogram to existing risk-stratification tools. Using a multi-institutional database, NCDB, and SEER, they found that the nomogram was predictive of clinical endpoints and outperformed other nomograms such as STAR-CAP, CAPRA, and the MSKCC nomogram.

Dr. Baumann notes that it is remarkable that a database developed using likelihood of PSMA PET-detected nodal or distant metastasis in 200 patients thought to have localized disease on conventional imaging could outperform other nomograms developed using clinical data from thousands of patients. This provides valuable data that patients predicted risk of upstaging on PSMA PET is closely linked with long-term outcomes such as distant metastasis and prostate cancer specific mortality. Future efforts are needed to further refine the nomogram and externally validate it.