(UroToday.com) In a GU session at the American Society for Radiation Oncology (ASTRO) Annual Congress, Dr. Padayachee presented on the role of tumor-targeted dose escalation for local control in localized prostate cancer.

To do so, they undertook a non-randomized, phase II trial which was accrued between 2012 and 2016. Patients were including if they had localized prostate cancer which intra-prostatic tumor identified on mpMRI which comprised <33% of the overall prostate volume. Patients, once enrolled, received whole gland prostate EBRT with 76 Gy in 38 fractions as well as a VMAT/HDR tumor boost and androgen deprivation therapy for up to 6 months at the discretion of the treating physician.

The choice of boost technique depended on the patient and physician decision and included in arm 1 an integrated boost with VMAT, up to 95 Gy in 38 fractions. In arm 2, patients received an HDR focal boost with 10 Gy in 1 fraction.

In total, the authors treated 80 patients on trial of whom 40 received each of the integrated VMAT boost and the HDR boost. Most patients had clinical T2a disease, ISUP grade group 2 or 3, and were classified as intermediate risk. ADT was used in only 4% of included patients. 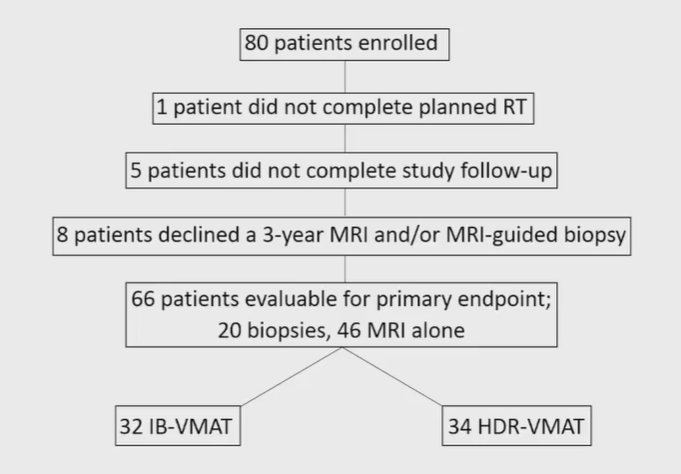 With longer follow-up, an addition 4 patients (3 of whom received HDR-VMAT) had intraprostatic failure, outside the boost volume. The relapse sites were typically closely adjacent to the initial treated lesion.