Dr. McKay began by defining high-risk prostate cancer. As can be seen on the slide below, definitions differ but at generally characterized by high-grade histology, significantly elevated prostate-specific antigen (PSA) (typically >20 ng/mL) and clinically advanced disease.

As can be seen on the left side of the above figure, localized high-risk disease represents approximately 15% of patients with newly diagnosed prostate cancer. These patients are at risk of increased mortality from prostate cancer with 15-year prostate cancer-specific mortality varying between 20-35% depending on which high-risk feature is considered.

Over the past few decades, treatment paradigms for these patients have not considerably changed and include surgery followed by adjuvant or salvage radiotherapy with or without androgen deprivation therapy or definitive radiotherapy with androgen deprivation therapy. However, Dr. McKay highlighted that neoadjuvant therapy is the standard of care for many other solid organ malignancies including breast, rectal, bladder, and others despite being infrequently used in prostate cancer.

However, neoadjuvant therapy in prostate cancer has been extensively previously investigated. In the 1990s, a number of randomized trials examined Luteinizing hormone-releasing hormone (LHRH) agonists with or without first generation non-steroidal anti-androgens. These trials predominately enrolled patients with low-risk disease and were powered to evaluated margin status. The maturation of these data demonstrated some benefit in rates of positive surgical margins, without longer-term benefit in biochemical recurrence, metastasis-free survival (MFS) or overall survival (OS). As newer agents have become available for prostate cancer treatment, these have been evaluated in the neoadjuvant space.

In a number of phase II trials that have been performed over the past 10 years, novel androgen axis inhibitors including abiraterone, enzalutamide, and apalutamide have demonstrated promising results in terms of both complete response and minimal residual disease (residual tumor with maximal cross-sectional dimension 0.3-0.5cm). In some of these trials, rates of CR + MRD have reached 30%.

A pooled analysis of three of these trials demonstrated that patients who achieved a CR or MRD at the time of radical prostatectomy did not have evidence of biochemical recurrence with a median follow-up of 3.4 years.

These phase II data provided the impetus for the design of the phase III PROTEUS trial which is a randomized, double-blinded study investigating peri-operative apalutamide in patients with high-risk localized or locally advanced prostate cancer who are candidates for radical prostatectomy.

In addition to androgen-axis targeting agents, cytotoxic chemotherapy (namely, docetaxel) has an established role in the treatment of patients with advanced prostate cancer. The PUNCH trial, which was presented at the 2019 American Urological Association (AUA) Annual Meeting and subsequently published, examined the role of pre-operative docetaxel + androgen deprivation therapy.

The PUNCH trial demonstrated no statistically significant difference in their primary outcome of 3-year biochemical progression-free survival (p=0.11). However, with respect to their secondary outcome of overall survival, the authors found a statistically significant benefit in 10-year overall survival with a hazard ratio of 0.61 (95% confidence interval 0.40 to 0.94).

However, most will be aware of the data from Messing et al. on the roll of immediate adjuvant androgen deprivation therapy in patients with pathologically node positive disease which demonstrated improvements in both progression-free survival and overall survival. However, there are limitations to this analysis including accrual which was less than half of target (100 vs 220), it’s single-institution design, and the lack of use of PSA which limits generalizability to modern practice.

The GETUG-20 trial enrolled patients with Gleason score 7 or greater, pT3b disease, and post-operative PSA <0.1 ng/mL to assess the role of 2 years of adjuvant leuprolide. This trial has completed accrual and results are awaited. ERADICATE is a similar trial utilizing a biomarker driven approach to enrich for patients with high-risk disease. Among those with a Decipher score greater than 0.6, randomization will occur to androgen deprivation therapy for 12 months with or without the addition of darolutamide. This trial is due for activation in Fall 2020.

More similar to the Messing trial in design is NRG-GU008 which is currently accruing. This trial includes patients with N1 disease at the time of surgery and a detectable PSA (>0.1 ng/mL). Patents are then randomized to radiotherapy with androgen deprivation therapy for two years with or without the addition of abiraterone, prednisone, and apalutamide.

Dr. McKay then highlighted the many trials demonstrating the benefit of addition androgen deprivation therapy for patients undergoing definitive radiotherapy.

However, the optimal duration of therapy has yet to be determined in randomized studies. For the most part, guideline bodies have recommended longer durations of therapy (24-36 months) for patients with high-risk disease. Additionally, there are no randomized data assessing the benefit of adding a first generation anti-androgen to LHRH agonist.

Dr. McKay then highlighted data from the STAMPEDE trial, among which a subset of patients had either clinically node-negative or node-positive non-metastatic disease. In patient undergoing radiotherapy, there appeared to be a benefit to the addition of abiraterone to standard androgen deprivation therapy.

The ongoing ENZARAD trial has completed accrual to assess the role of radiotherapy and LHRH agonist with conventional non-steroidal anti-androgen or enzalutamide for 2 years among patients with high risk-disease. Similarly, the ATLAS trial has completed accrual with randomization to radiotherapy, LHRH agonist, and bicalutamide x 4months with or without apalutamide for 30 months. While ENZARAD is assessing the primary endpoint of overall survival, ATLAS’s primary outcome is metastasis-free survival. The RTOG 05-21 trial randomized patients with high-risk disease to radiotherapy and 2 year of androgen deprivation therapy with or without 6-cycles of adjuvant docetaxel. Over a median follow-up of 5.7 years, 4-year overall survival was 93% (95% confidence interval 90-96%) in those receiving docetaxel as compared to 89% (95% confidence interval 84-92%) in those receiving radiotherapy with androgen deprivation alone (hazard ratio 0.69, 95% confidence interval 0.49 to 0.97). Interestingly, in the subgroup of patients with non-metastatic disease in the STAMPEDE trial, there did not appear to be a benefit to the addition of docetaxel (hazard ratio 1.11, 95% confidence interval 0.67 to 1.85). Utilizing a pooled analysis of GETUG-12, RTOG 05-21, and STAMPEDE, Dr. McKay highlighted the uncertainty regarding the benefit of docetaxel in patients with non-metastatic prostate cancer.

Finally, Dr. McKay highlighted the ongoing PEACE2 trial which is a multi-arm trial assessing the role of pelvic radiotherapy and adjuvant cabazitaxel chemotherapy in a 2x2 factorial design among patients with high-risk non-metastatic prostate cancer. 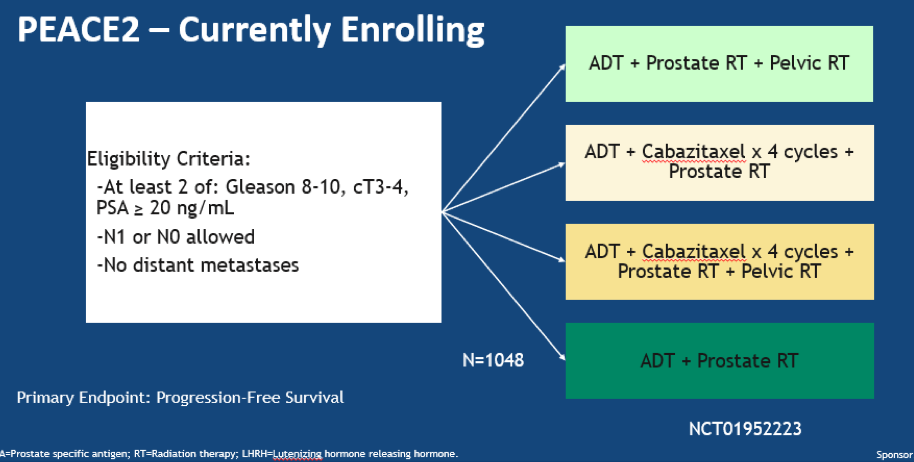 Dr. McKay closed with a number of take-home points: