This website uses cookies to ensure you get the best experience on our website. Privacy Policy
(UroToday.com) The ASCO 2020 Virtual Education Program featured a session highlighting molecular enrichment strategies in genitourinary cancer, including Arlene Siefker-Radtke, MD, discussing new approaches to molecular enrichment for urothelial carcinoma. Dr. Siefker-Radtke notes that there are several components that make a good biomarker:

Erdafitinib gained prominence last year through the BLC2001 trial published in the New England Journal of Medicine.1 This was an open-label, phase 2 study, for patients who had locally advanced and unresectable or metastatic urothelial carcinoma with prespecified FGFR alterations. All the patients had a history of disease progression during or after at least one course of chemotherapy or within 12 months after neoadjuvant or adjuvant chemotherapy. The primary endpoint was the objective response rate, and key secondary endpoints included progression-free survival, duration of response, and overall survival. There were 99 patients that received a median of five cycles of erdafitinib, with a rate of confirmed response to erdafitinib therapy of 40% (3% with a complete response and 37% with a partial response). The median duration of progression-free survival was 5.5 months, and the median duration of overall survival was 13.8 months. Importantly, based on these results, erdafitinib received FDA accelerated approval in April 2019.

According to Dr. Siefker-Radtke, the best biomarker for benefit from immunotherapy is the response to immunotherapy. The first biomarker in urothelial carcinoma was PD-L1 testing, however, this proved to be too dynamic (increased levels post-chemotherapy, post-BCG, and after PD-L1 therapy) with too much antibody variability. Other biomarkers that have been assessed include the IFN-gamma signature, CD8 cells (which predicted response in Imvigor 2102 and CheckMate 2753), and chemokines involved in these pathways, including CXCL9 and CXCL10. Additionally, tumor mutational burden and DDR mutations have been utilized, notably leading to FDA approval for pembrolizumab for MSI-high and high tumor mutational burden solid tumors. Stromal factors, including TGFbeta, EMT, and T-cell expression have also been assessed. Furthermore, regarding stromal pathways, patients with FGFR alterations may respond to FGFR inhibition better than to immune-oncology therapy. In data presented at ASCO 2018, among patients treated with prior immunotherapy, patients subsequently treated with erdafitinib had an objective response rate of 59%: 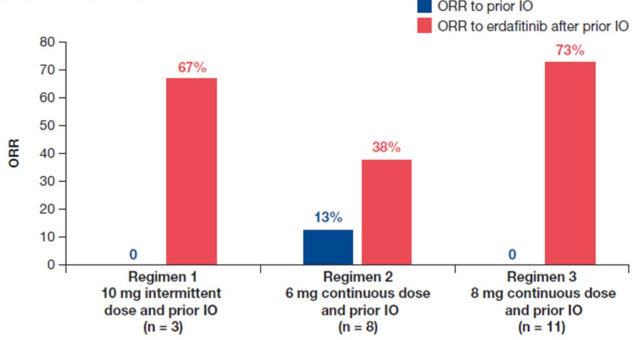 Dr. Siefker-Radtke concluded with the following take-home messages regarding biomarkers in immunotherapy response: