She began by highlighting the purpose of the American Cancer Society which exists because the burden of cancer is unacceptably high. Thus, their mission is to improve the lives of patients with cancer and their families with a scope encompassing prevention and early detection, treatment, and survivorship. Highlighting the scope of the problem, Dr. Knudsen cited data showing that the national burden of cancer in the United States encompasses 1.9 million new diagnoses and more than 600,000 deaths annually.

To address their mission of improving the lives of cancer patients and their families, the ACS undertakes a tripartite approach including advocacy, discovery, and patient support. 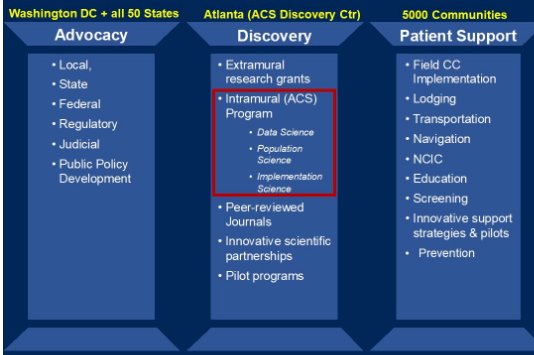 In the context of the intramural program of the ACS Discovery Center, cancer statistics, cancer facts and figures, as conveyed through the Annual Report to the Nation form a critical component of the ACS’s ability to convey the magnitude of the problem that cancer represents in the country. Through research, advocacy, and awareness with 13,339 grants totaling $3.1 billion dollars since 1991 (making it the largest funder of cancer research outside of the US government in the nation), the ACS has contributed significantly to cancer deaths being adverted. When comparing the period 1991 to 2019, there has been a 32% decrease in cancer-related mortality which corresponds to more than 3.5 million deaths averted.

However, Dr. Knudsen noted that these advances have not benefited the population equally, noting in particularly vast differences in cancer outcomes between Blacks and Whites. She further emphasized the long list of known sources of cancer disparities including a lack of transportation, need for housing near a cancer center, gaps in health and digital literacy, the financial toxicity of cancer care, a lack of access to coverage and quality care, a hesitation to enroll in clinical trials and, perhaps most importantly, provider and health system level unconscious biases. Geographically speaking, she emphasized that there has been a dramatic shift in the regional distribution of county-level cancer mortality between the 1970s and current day.

In the context of this conference, Dr. Knudsen suggested that we should use the United States as a model for study to consider current trends in incidence and mortality for genitourinary cancer as well as the current state of knowledge regarding disparities (including those due to race/ethnicity, geography, age, and other characteristics) to develop calls for action in terms of both research and intervention.

Considering first the burden of the problem, genitourinary cancer has a high incidence representing more than 400,000 new diagnoses annually, more than 20% of all cancer diagnoses. Further, genitourinary cancers represent significant mortality with prostate and male bladder cancer representing more than 46,000 deaths annually (14.4% of all male cancer deaths). Further, there are concerning mortality trends among women with genitourinary malignancies. To this end, she specifically focused on bladder cancer in which we see significant disparities in incidence (with higher rates among men than women and among White men than black men). 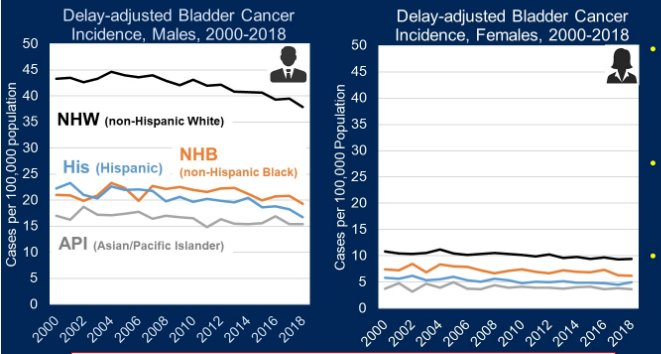 Interestingly, the incidence is declining at a faster rate among White men than other groups (potentially related to changes in occupational risks) and among Black women (potentially paralleling differences in smoking rates). As highlighted in the figure below, rates of smoking declined much more dramatically among Black teens than White teens through the 1980s and 1990s resulting in significant differences in this key risk factor for bladder cancer. 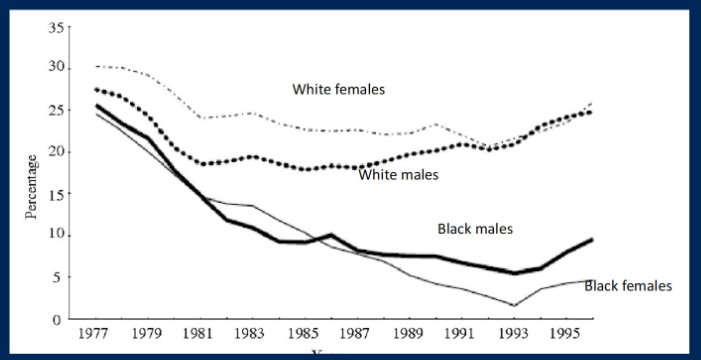 Considering bladder cancer, Dr. Knudsen highlighted dramatically higher rates among men compared to women and among White men compared to Black men. Interestingly, there has been a steady decline in mortality rates for Black men. 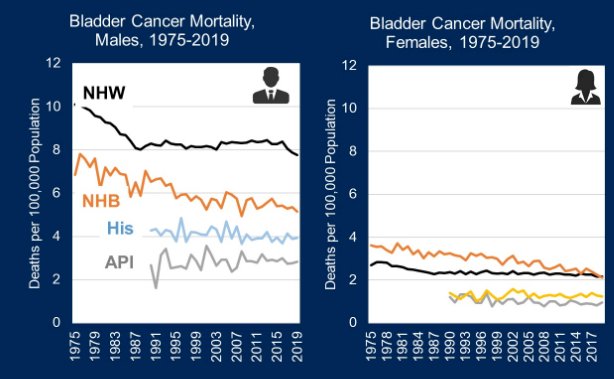 While both are smoking related, Dr. Knudsen emphasized distinct profiles in mortality trends between lung cancer and urothelial cancer.

In addition to these differences due to race and sex, she highlighted large regional variations at the county level, both in terms of incidence and mortality. Moving forward in bladder cancer, Dr. Knudsen emphasized that there are many existing research priorities including better understanding risk factors that may explain differences in observed epidemiologic trends, considering screening approaches for individuals at average risk, between understanding gender disparities in incidence, and understanding higher mortality in White men. The last two of these priorities which represent distinct epidemiologic trends from lung cancer. Further, from an implementation perspective, there is an ongoing need to enhance tobacco cessation strategies.

Dr. Knudsen then moved to a discussion of kidney cancer. In terms of incidence, she emphasized that there has been a long-term increase in the incidence, particularly in localized disease. This is, at least in part, attributable to the incidental diagnosis of asymptomatic tumors as a result of cross-sectional imaging. However, there has been a slow and steady increase across race/ethnicity and gender with approximately half of all kidney tumors being potentially preventable by the elimination of strong risk factors such as excess body weight and tobacco smoking. In contrast to these rising trends in incidence, mortality in kidney cancer has been declining since the 1990s, with an increasing decline in recent years. However, mortality has been relatively stable among Black men. She further emphasized that, as with overall trends and bladder cancer, there are substantial geographic variations in both kidney cancer incidence and mortality. 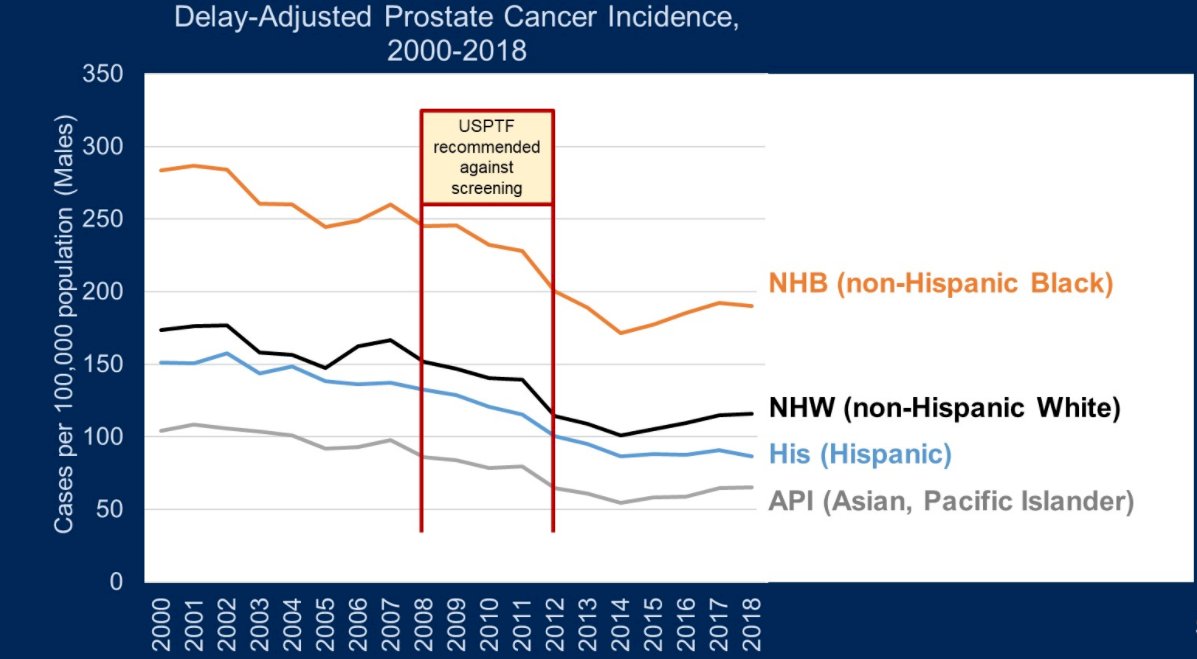 While the higher incidence of prostate cancer among Black men (73% higher) has been recognized for many years, the reasons underpinning this observation have not been fully understood, though health care access likely contributes. Moving forward, Dr. Knudsen emphasized calls to action regarding screening advocacy and refining screening guidelines for average and high-risk populations.

Additionally, Dr. Knudsen emphasized that, perhaps due to changes in PSA screening guidelines, there has been a recent stage shift with an increasing incidence in the incidence of late stage prostate cancer (with a 4-6% annual increase in advanced disease since 2011).

Moving from incidence to mortality, she emphasized that prostate cancer mortality peaked in the early 1990s, due to attribution bias after the advent of PSA screening. Since that time, mortality declines are subsequently flattening, potentially as a result of saturation of testing and potentially a need for new treatment strategies. Thus, moving forward, Dr. Knudsen advocated a push for screening refinement and research intensification in new therapeutic strategies. Further, given striking regional variations, she suggested work is needed to understand these differences better. In particular, she highlighted that California has among the lowest prostate cancer incidence but the highest mortality while Florida has a relatively balanced incidence and mortality rates. Further, there is regional variation in racial disparities: in the Carolinas, there is significantly higher mortality among Black men while, in Texas and New York, outcomes are relatively equitable between the races.

Moving forward, she emphasized the need for research to better define precise screening guidelines, to address screening saturation, and novel therapeutic approach. In terms of implementation, she highlighted the need for evidence based screening uptake (as emphasized by the recent reverse stage shift), to address regional and demographic (particularly racial) disparities (likely to due differences in access to screening and care), to address underutilization of germline testing in patients with localized disease, and to increase clinical trials uptake.

She then discussed trends in testicular cancer. Across all subgroups, there has been an increased incidence for all racial subgroups, though she highlighted that this is particularly alarming among Hispanics (where there has also been a steady rise in mortality. Thus, there is a pressing need for increased awareness and screening, a better understanding of risk factors, and an understanding of racial/ethnic disparities. Further, there are large regional variations, with Arizona, in particular, showing low incidence and high mortality rates.

Moving forward, Dr. Knudsen emphasized the importance of genitourinary cancer in the overall burden of cancer in the United States, as well as numerous concerning disparities and trends across each of the urologic malignancies.